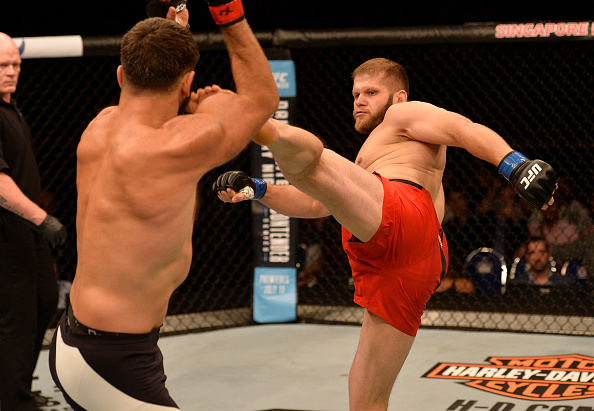 Marcin Tybura caught a kick from Andrei Arlovski in the early stages of the first round of their heavyweight clash and used it to dump the former champion to the canvas. For the next four minutes, the Polish upstart dominated the action on the mat, transitioning to mount and marking up Arlovski’s visage with a solid, steady diet of ground and pound.

But in the final 15 seconds of the frame, Arlovski made it back to his feet and pressed forward behind heavy, urgent punches that seemed to shift the momentum into his favor heading into the middle stanza of Saturday’s co-main event.

After the explosive burst to end the first, the pace slowed in the second, with Arlovski leading the dance and turning the bout into a grind, pinning Tybura against the fence for long stretches, with neither fighter able to land anything of substance during the round.

Knowing the third round would likely determine who would emerge victorious, Tybura pursued a takedown early and eventually found success, putting Arlovski on his back and successfully controlling “The Pit Bull” for the remainder of the frame. Each time Arlovski looked to buck and roll, his Polish counterpart went with him, keeping him pinned to the canvas until the final horn sounded.

“He was one of my biggest idols in the sport,” Tybura said of Arlovski when speaking with Dan Hardy after picking up the unanimous decision win with scores of 29-28, 28-27 and 29-27. “I think I could have finished it in the first round; I have him on the ground and put so much into finish. The second round wasn’t so good, but hopefully in the third, I came back.”

The victory is the third straight inside the Octagon for Tybura, who entered the contest ranked No. 13 in the heavyweight division, but should find himself in a higher position once the rankings update early next week.

Colby Covington has claimed that he’s the best grappler in the welterweight division and while there is still some work to be done in order to make that official, “Chaos” took another step towards that goal in Singapore, grinding out his biggest win to date against Dong Hyun Kim.

The 29-year-old American Top Team representative spent the majority of the three-round affair stuck to Kim like Velcro, chaining together takedown attempts and refusing to break his grip even when the South Korean “Stun Gun” tried to return to his feet and break into space. Whenever Kim found space, there was Covington, back in on his hips, putting him back on the canvas.

Though far from the most thrilling encounter of the evening, this was a breakthrough performance for Covington nonetheless, as the boisterous former JUCO and Division I All-American dominated the seventh-ranked Kim from start to finish, collecting scores of 30-25, 30-26 and 30-27 to earn his fourth straight victory.

The Brazilian didn’t look out of place in his first appearance in his new division, showing the same strength and strong work in the clinch that was a trademark of his days fighting in the 155-pound weight class. His forward pressure prevented Saffiedine from really finding a rhythm and his constant body work took some of the steam out of the perennial contender’s punches as the fight wore on.

While he didn’t exhibit the speed advantage many anticipated he would have in this contest, Saturday’s fight was a solid effort against a durable, experienced opponent and establishes a strong baseline for dos Anjos as he looks to replicate his lightweight success in his new division.

Dos Anjos moves to 26-9 overall and picks up his 14th career victory inside the Octagon by knocking off the No. 11 ranked fighter in the welterweight ranks. Saffiedine has now lost three straight and falls to 2-4 under the UFC banner.