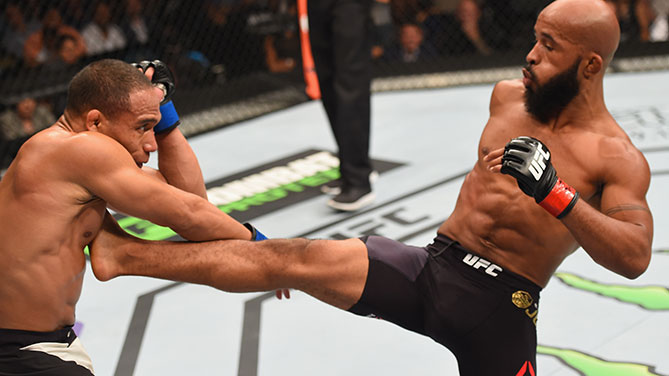 Number one flyweight contender John Dodson gave champion Demetrious Johnson the toughest test of his reign when they first met in 2013. Saturday night at the MGM Grand Garden Arena, it wasn’t even close as Johnson won a five-round unanimous decision in the main event of UFC 191 to retain his 125-pound crown for the seventh time.

“I’m a hard worker, and I knew that John Dodson was gonna work hard, but I love working for what I have,” Johnson said.

Dodson ran out of his corner as the bout opened, and while he didn’t throw or land anything of significance, he did let Johnson know that he would be in his face for as long as the bout lasted. Johnson quickly turned into the aggressor though, and he tried to land his lead right repeatedly. And though he didn’t land it flush, he was making Dodson think and defend. That went for takedowns too, as Dodson shook off three attempts by the champion before the horn sounded.

Dodson scored the first takedown of the fight in the opening minute of Round 2, and while the combatants didn’t stay there for long, in a close fight, any scoring helps, especially with Johnson having difficulty getting the challenger to the mat. In the final 90 seconds, Johnson picked up the pace with his striking, rallying as the frame wound down.

Johnson’s takedown attempts continued to come up short in the third round, as Dodson’s balance was on another level entirely. Johnson was making sure he was punishing his opponent on the inside during each attempt though, whether with knees, short punches or elbows. In the final minute, Johnson finally got his takedown, making a late statement to Dodson.

The gas tank of the champion remained full in Round 4, and he pushed Dodson throughout, with the challenger unable to put together a consistent offensive attack, even when he was able to pun Johnson to the fence. And when the two broke, “Mighty Mouse” was right back pushing the pace, forcing Dodson to back up in order to catch a breath.

The pattern remained intact in the final round, Johnson adding a couple thudding takedowns to emphasize his dominant victory as Dodson was simply unable to turn things around against the longtime titleholder.