The post-Ultimate Fighter Latin America career of Estado de Mexico’s Alejandro Perez didn’t get off to a great start, as Patrick Williams submitted the reality show winner just 23 seconds into their bantamweight bout.

Williams rocked and dropped Perez with two right hands as the bout began, and the American didn’t let his opponent off the hook, locking in a guillotine choke that Perez had no chance against, with referee Dan Miragliotta halting the bout and putting Williams in the history books as the owner of the fastest submission in UFC / WEC bantamweight history. 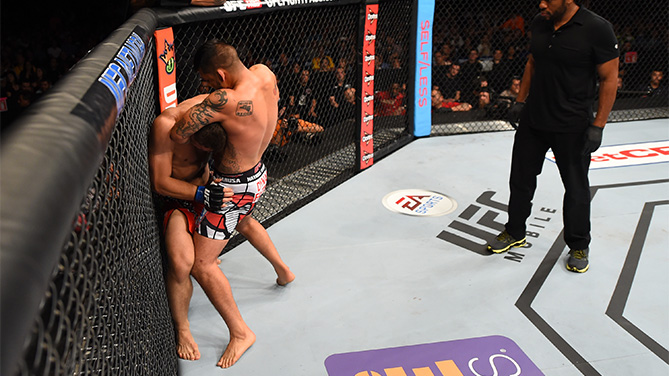 The resurgence of former Ultimate Fighter winner Efrain Escudero continued in his lightweight bout against Drew Dober, as he won his second consecutive Octagon bout, submitting Dober in the first round.
> WATCH: Efrain Escudero Backstage Interview

Less than 30 seconds into the bout, both fighters threw kicks simultaneously. As they got tangled up, Dober fell to the mat. As he rose, Escudero locked in a guillotine choke. Dober held on for as long as he could before tapping out 54 seconds into the round.