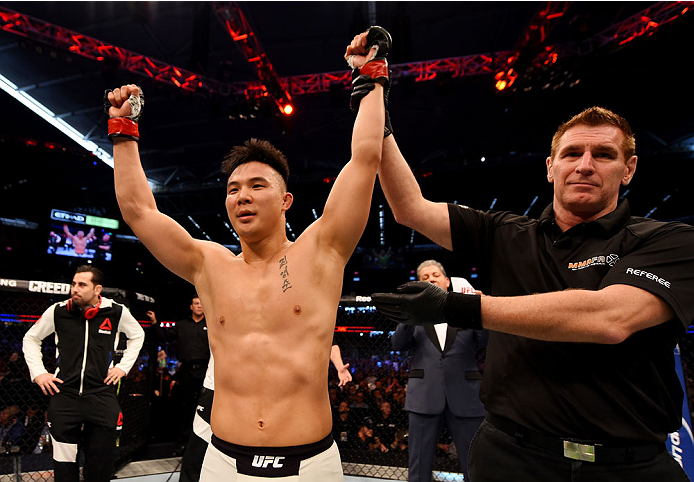 Adding to the explosive line up for UFC FIGHT NIGHT® Manila: LAMAS vs PENN is a Welterweight bout between James “Moon Walker” Moontasri (9-4-0, fighting out of Los Angeles, California USA) and Alex “The Great White” Morono (12-3-0, fighting out of Houston Texas USA).

A black belt in Tae Kwon Do and Muay Thai, Moontasri will look to showcase his fast and dynamic striking when he faces the aggressive Morono who is currently on a six-fight winning streak, most recently coming off a split-decision victory in UFC 195: Lawler vs Condit.

Known for his aggressive attacking style, Yang is a decorated mixed martial artist with black belts in Tae Kwon Do, Judo, and Yong Mong Do. He meets UFC newcomer and grappling specialist Janes who is currently on a seven-fight winning streak, five of which came via rear naked choke.

UFC FIGHT NIGHT® Manila: LAMAS vs PENN will see the return of former UFC Lightweight and Welterweight champion B.J. “The Prodigy” Penn who will face No.4 ranked UFC Featherweight contender Ricardo “The Bully” Lamas in an explosive five round featherweight fight.

The UFC has also confirmed that Derrick "The Black Beast" Lewis (16-4-0, fighting out of Houston, Texas USA) will clash against Marcin "Tybur” Tybura (14-2-0, fighting out of Warszawa, Poland) in the Heavyweight co-main event of UFC FIGHT NIGHT® Manila: LAMAS vs PENN.

A Strawweight bout between and Seohee Ham (16-7-0, fighting out of Busan, South Korea) and Danielle “Dynamite” Taylor (7-2-0, fighting out of Van Nuys, California USA) in what will be the first-ever women’s bout UFC will hold in the Philippines

Please continue to check UFC.com for more information or current fight news. All bouts live and subject to change. Other bouts will be confirmed as they become available.