Two first-round KOs and a division gets more crowded

The lightweight division’s Top 10 is loaded – this is known. After UFC 199, the UFC’s best division is a bit more crowded thanks to Beneil Dariush and Dustin Poirier.

Six weeks after a surprising loss at Fight Night Tampa, Dariush has re-inserted himself into the lightweight mix, delivering one of the best knockouts of the night at The Forum when he beat undefeated James Vick. Vick’s legs completely went out from under him and Dariush leaves UFC rankings voters with a touch decision to make. 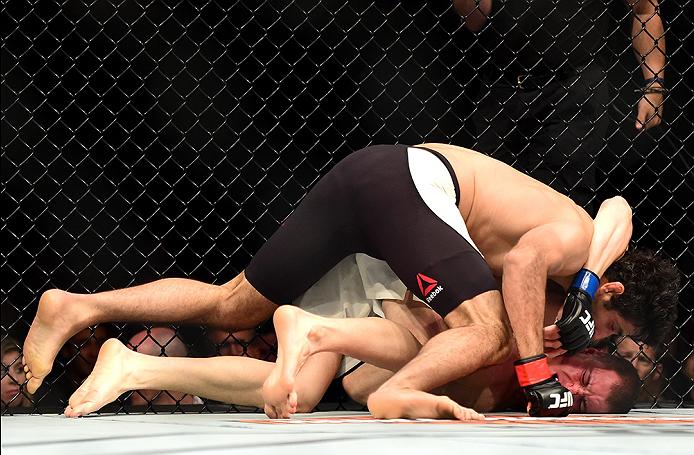 At No. 10 among 155-pounders, Dariush is two spots behind Michael Johnson, whom he beat last August. But right in front of Dariush at No. 9 is the man who just defeated him, Michael Chiesa. His performance Saturday certainly dignifies a jump in the ranks, but where would that leave Chiesa?

Regardless, Dariush still has a lot of work left to do to make headway in the division despite having won 6 of 7.

And right behind Dariush is Poirier. He, too, had a first round finish, knocking out Bobby Green and also wants in the mix.

“I feel the power really coming back. I feel natural. Before I felt slower and unclear,” Poirier said about transitioning to 155 pounds. “I want big fights and I want to put people away on top of Pay-Per-Views.”
RELATED CONTENT: Beneil Dariush backstage interview | Dustin Poirier backstage interview

His claim is warranted. Since turning lightweight after losing to Conor McGregor at UFC 178, Poirier is 4-0 with three first round finishes. All he doesn’t have on his resume is a top opponent.

That’s exactly what he called for after knocking out Green. Michael Chiesa recently found success by calling for Top 10 opponents and UFC matchmakers obliged, scheduling him against Dariush and now third-ranked Tony Ferguson. Will Poirier get similar treatment?