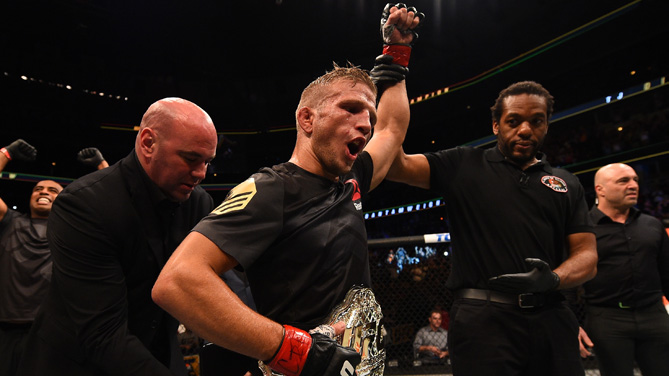 It was no fluke. TJ Dillashaw’s rematch performance against the man he beat for the UFC bantamweight title, Renan Barao, was even better than the first one, as he stopped the Brazilian in the fourth round of their UFC Fight Night main event Saturday at Chicago’s United Center.

“I’m really proud of my performance,” Dillashaw said. “I got hit a little more than I wanted to, but it’s because Barao’s a killer. He’s good.” 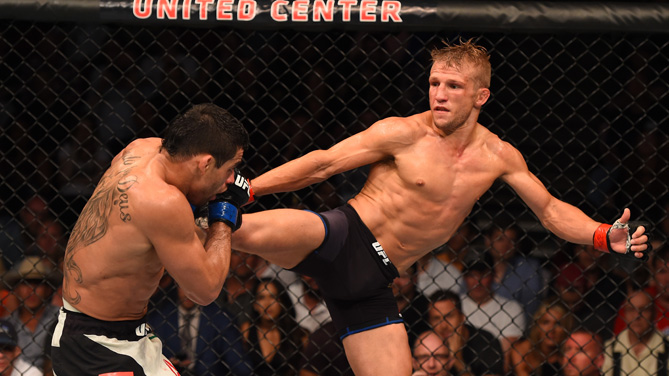 But Dillashaw was just better, both in their initial bout in May of 2014, when the Californian snapped Barao’s nine-year, 35-fight unbeaten streak, and in their second meeting, which the champion dominated from start to finish, cementing his credentials as one of MMA’s best, pound-for-pound.

Dillashaw shot out of his corner with his hands down and feet moving in every different direction, in stark contrast to the all business Barao, who stalked behind a high guard. Barao landed some hard blows in the early going, but by the second minute, Dillashaw drilled Barao with some flush shots of his own before the two locked up against the fence. Barao landed knees at close range before the two separated, and once they engaged again, it was Dillashaw confidently in control during all the exchanges. Barao did tag the champion several times before the end of the round though, reminding Dillashaw that he was still in the fight.

Sacramento’s Dillashaw looked for the takedown early in round two, Barao defending well against the fence before the two broke. Barao responded with a takedown of his own, Dillashaw jumping right back up and into a clinch that he controlled until breaking and then jarring Barao with a pair of right hands. By the fourth minute, Dillashaw began picking his opponent apart, mixing up his strikes beautifully as Barao seemed lost in his forward march. 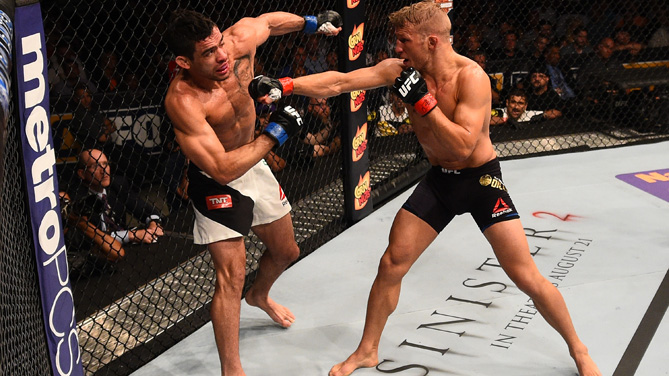 The clinic continued in the third frame, Dillashaw not even concerned with anything coming his way as he made Barao miss and made him pay with shots to the head and body. And when he wasn’t sticking and moving on the Brazilian, he was wearing him down in the clinch before finishing the round off with a flurry of flush shots that wobbled the challenger.

Dillashaw closed the show in the fourth, hurting Barao with a left hook and then emptying his clip on the hurt former champion. After a series of unanswered blows, referee Herb Dean intervened, with the official time :35 of round four.