Holly Holm made history at UFC 193 by becoming the first fighter to defeat Ronda Rousey inside the Octagon. 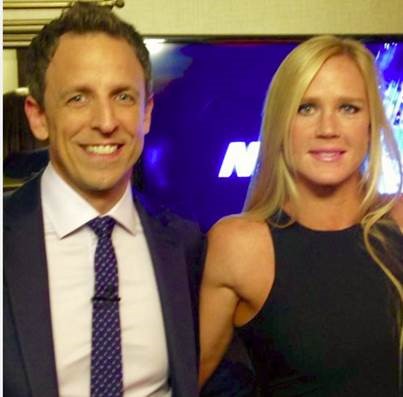 Tonight, she'll make more UFC history as she gets to be the first at doing something else.

The women's bantamweight champion makes history this evening by becoming the first UFC fighter to appear on Late Night with Seth Meyers, which airs tonight at 12:35 am ET/11:35 pm CT on NBC.

Holm has taken the media by storm since her stunning victory. Along with tonight's appearance on Late Night, she has also shown up on Live with Kelly and Michael (See clip here), The Herd with Colin Cowherd, The Talk, Extra, Larry King Now, E! News and many more. She will also appear on several ESPN shows on Tuesday, Nov. 24, including SportsCenter, First Take, His & Hers and Highly Questionable.