We caught up with Tuivasa to discuss Australian MMA, his opponent Junior Dos Santos, how he think the fight will play out and much more.
By Gavin Porter • Nov. 29, 2018

The Australian and New Zealand MMA movement isn’t something that the athletes fighting on UFC Adelaide take lightly. Heavyweight Tai Tuivasa knows that Saturday night’s (Sunday morning local time) card is a massive opportunity to show everyone just how talented this region of the world is.

He also thinks it’s the perfect time for a changing of the guard. His longtime mentor and training partner, Mark Hunt, will be making his final UFC appearance in the co-main event spot. Tuivasa will be going to war with former UFC heavyweight champion Junior Dos Santos in the main event.

BamBam believes that it’s time for Hunt to pass the torch and that he will put the flame out on Dos Santos’ title dreams.

We caught up with Tuivasa to discuss Australian MMA, his opponent Junior Dos Santos, how he think the fight will play out and much more.

UFC: You’re here headlining an event in Adelaide. How much do you think MMA has grown in Australia since you first fought in the UFC?

TT: Ever since my first fight I’ve made it known that we’re on the come up and we’re here to take over. It’s crazy how small it actually is in this country and in America it’s totally different. It’s every pub, ever restaurant. We’re really not that big over here and while that’s not a big deal, but it points out we’ve got a champion of the world. Imagine what’s going to happen in 5 or 10 years. And now New Zealand is right behind us, that’s our neighboring country. It’s massive for both our countries to keep this momentum.

UFC: We’ve seen your potential continue to sky rocket with each fight. What’s been the biggest progression in your game?

TT: Before I was in the UFC I never really trained properly. Like many people know I’m from the street and I enjoy fighting, I love fighting. That’s just punching heads and getting punched and s*** like that. But I’ve seen myself grow in this last year with something I didn’t think that I could do. The weight cuts, cutting my weight and training, I’ve just gotten better each time. I’m excited for myself to see what I actually can do because it was too long, it wasn’t until I found out I was having a kid where I snapped out of my s*** and was like “f*** I gotta do something.” From then to now, anything can happen.

UFC: Does being a father make you take a little more care of yourself when you’re in the Octagon?

TT: No not at all. This is my job this is what I do. I was fighting before my son but this is how I earn my bread and this is how my son is going to get a life that I never got to see. If punching people in the head is what I gotta do, it’s what I gotta do. And it’s in his blood. His uncle is a fighter, his grandfathers both of them are fighters, his dad is a fighter. You can’t hide it, this is what we do. 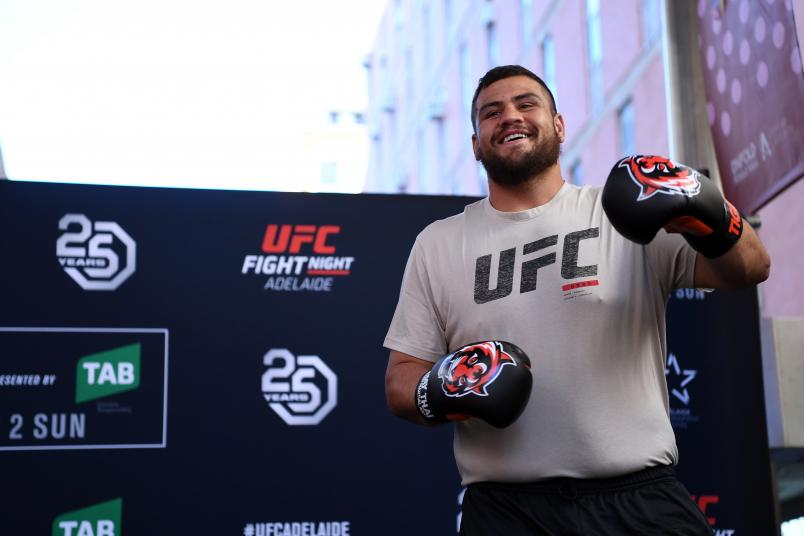 UFC: What is your biggest advantage in the fight with Junior?

TT: My biggest advantage would obviously be that I’m young. Most of it he’s winning he’s got the experience, he’s fought these five rounders and he’s fought the best of the best. And that’s what I wanted to do. I’m not here to f****** fight nobodies or tip toe my way to the top. I’m here to fight the baddest dudes, win or lose, I can die and say “f*** off I fought the baddest guys in the world.” And that’s what I want to be known for.

UFC: What do you need to get the job done on Sunday?

TT: There is no perfect recipe to fighting, it’s very simple. You get hit and you hit back and the first one to win, wins. And that’s how I fight every fight. I prepare myself, I listen to my coaches and my trainers. They get me to a certain point but the rest is up to me. When I’m in the ring it’s nothing down but head down, a** up swing for the fences.

UFC: What’s it going to be like for you to be on the main card with your guys Mark Hunt and Tyson Pedro?

TT: This is the takeover. This isn’t something that’s just popped up. This is something that has been in my head for a long time. It’s just like anything you let it sit and it manifests, when it happens you don’t even know it’s happening. Until you bring that up, it gives me goosebumps. What better way to do it. For someone to come on my home soil, who’s a guy who can put anybody out in this world. I’m not taking that lightly at all. This is in front of my people and I’ll be going down. It’s either go down or get down and that’s it.

Big hands and big dreams will be on display when Tuivasa and Dos Santos take each other on the in the main event of UFC Adelaide. Make sure you tune into FS1 at 10pm/7pm ETPT to watch the main card.