Texas’ Kevin Aguilar followed up his July win on Dana White’s Tuesday Night Contender Series with an entertaining unanimous decision victory over Rick Glenn in his UFC debut at The Pearl at the Palms in Las Vegas.

Glenn got off to a good start, but midway through the opening round, Aguilar rocked the Iowa native with a right hand and he controlled the second half of the frame, raising a knot under Glenn’s right eye.

In the second, it remained to be a back and forth scrap, but in round three, the bloodied Aguilar again hurt Glenn midway through and this time he looked to be close to a finish. But with both fighters’ gas tanks rapidly emptying, Glenn was able to survive and even stagger Aguilar just before the horn, wrapping up a grueling three-round war between the two featherweights.

Flyweight veteran Joseph Benavidez nearly saw a victory slip away against fellow contender Alex Perez, but the New Mexico native stayed focused and got the win via first-round TKO.

Perez pressed the action to start the bout, but as Benavidez began to get his counters off, he slowed his foe down, and with under two minutes left, he found the opportunity to push Perez to the mat. While there, Benavidez unloaded with a barrage of unanswered right hands, and referee Yves Lavigne jumped in and appeared to stop the fight. But he didn’t, telling the two to keep fighting and allowing Perez some daylight. Benavidez recovered well and looked for a choke, but when that didn’t work, he went back to ground strikes, and this time, Lavigne did stop the fight, with the end coming at 4:19 of round one. 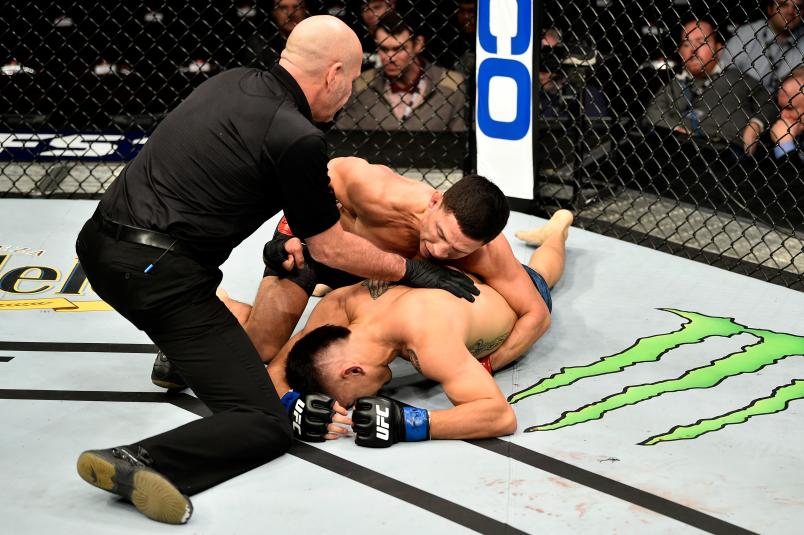 Team Gastelum’s Maurice Greene impressed in his Octagon debut, submitting Team Whittaker’s Michel Batista in the first round of their heavyweight bout.

Not surprisingly, Batista - a former Cuban Olympian – got the fight to the mat in the second minute. But there, Greene kept his cool as he sunk in the triangle choke that forced Batista to tap out at the 2:14 mark of the opening frame.

With the win, Minnesota’s Greene moves to 6-3. Camaguey’s Batista falls to 4-2. 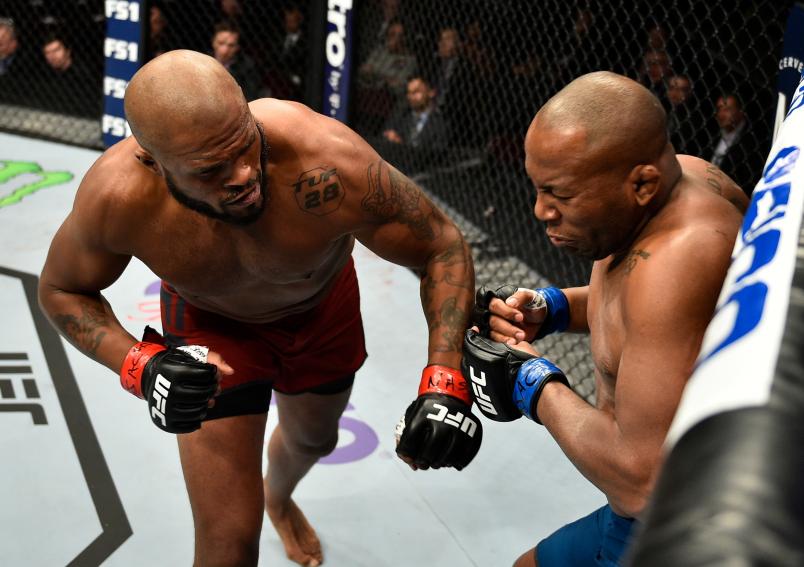 The fight started with some furious striking exchanges, but as the round progressed, the bout settled into a more measured pace, with Letson holding the edge over Stoliarenko.

Letson stayed a step ahead of her foe in round two, dodging a pair of takedown attempts in the process, but Stoliarenko did open up a cut on the Milwaukee native with a flush elbow at close range, reminding “Nidas” that she was still in the fight.

Two minutes into the third, Stoliarenko found her opening by sinking in a guillotine choke, and while it was tight, Letson ultimately got free and assumed control from the top position. Letson bulled Stoliarenko to the fence and got off some strikes, but she remained cognizant of her opponent’s ground game, drawing a restart from referee Chris Tognoni with 30 seconds left when the action stalled. 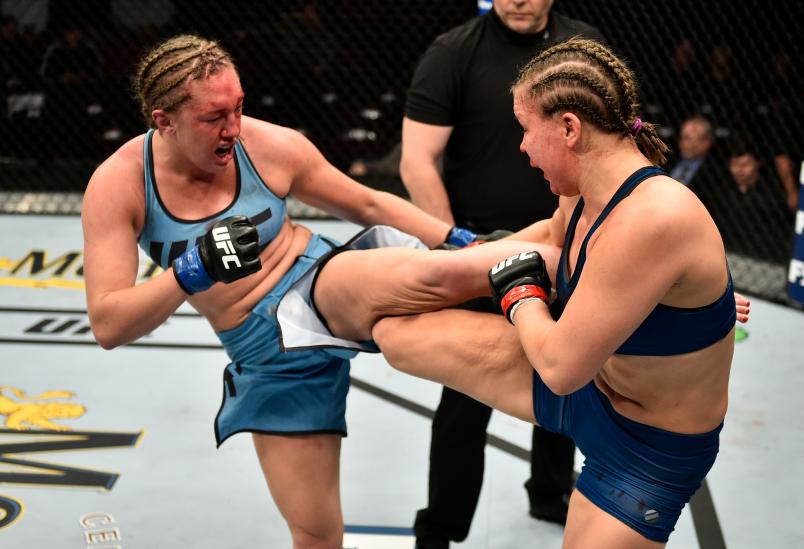 Roberts (7-0) fought like a veteran in his Octagon debut, using his range to keep Horcher (13-4) from getting settled, and once the Californian was able to get close enough to grab the Pennsylvanian, he locked in a tight standing guillotine choke that forced Horcher to tap out at 4:50 of round one. 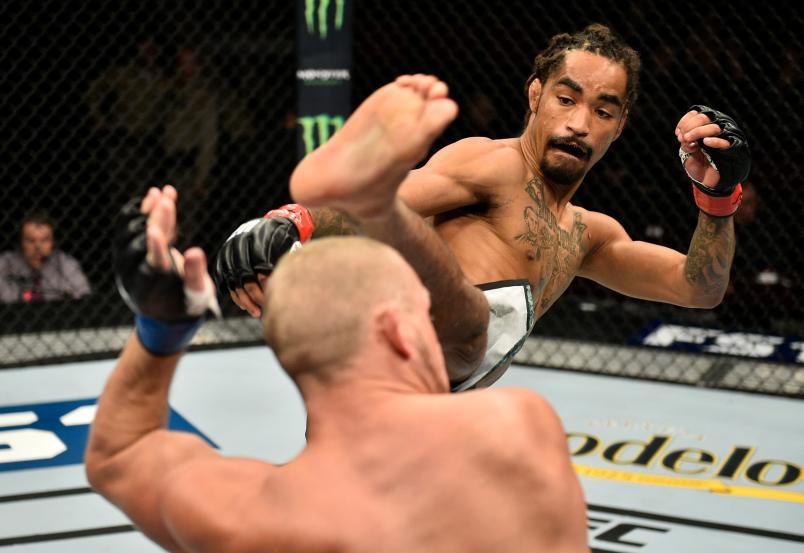 Welterweight veteran Tim Means started fast and didn’t let up against Ricky Rainey, stopping the North Carolina product in the first round.

Busy from the time the two were waved into battle, Means wasn’t even slowed down by an eye poke and a fence grab by Rainey, and his aggression paid off with an array of ground strikes that prompted referee Mark Smith to halt the fight just 78 seconds into the bout. 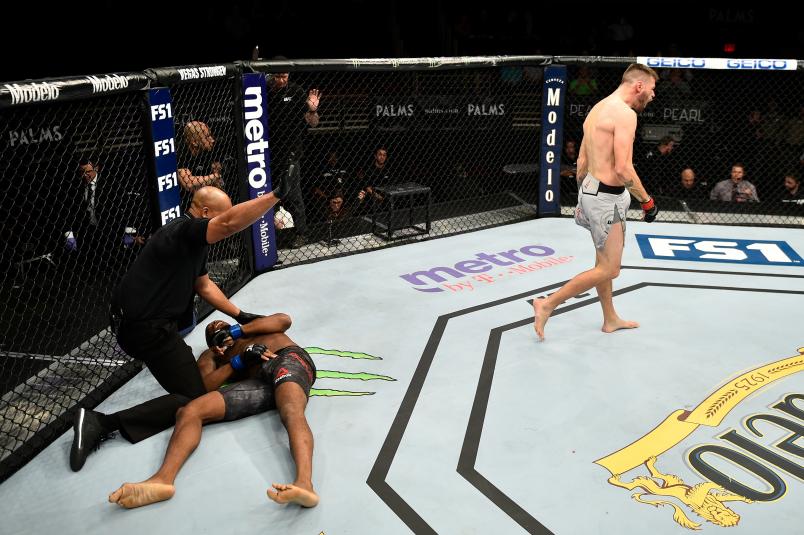 Following a knockout win in his UFC debut, Brazil’s Raoni Barcelos showed off his ground game in fight number two, as he submitted Chris Gutierrez in the second round of the bantamweight opener.

After a feeling out process in the first round, the action heated up in the second, especially after an elbow by Gutierrez opened a nasty cut over Barcelos’ right eye. Once the blood started flowing, Barcelos picked up the pace, ultimately taking his foe’s back, where he sunk in the rear naked choke that forced a tap out at the 4:12 mark of round two. 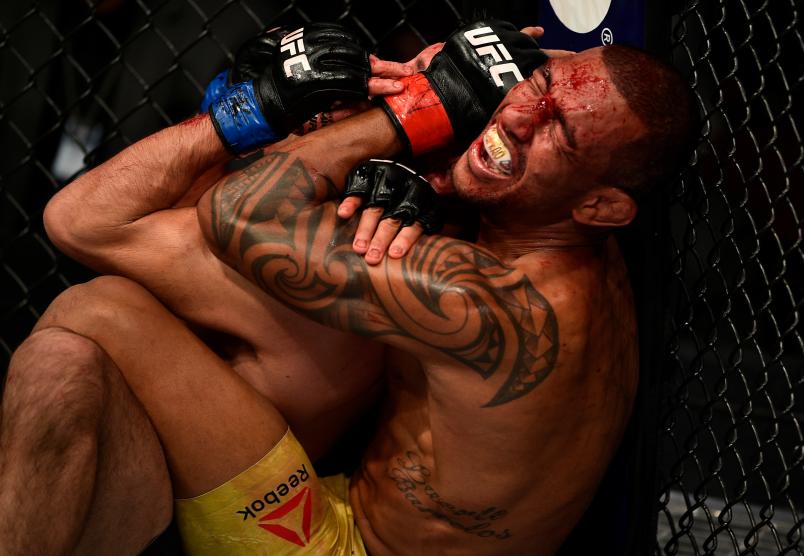