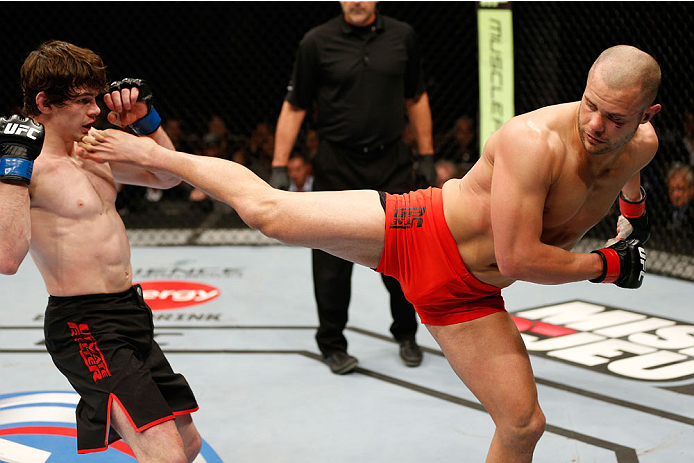 Being crowned The Ultimate Fighter winner is never easy.

No matter how many seasons have aired, living six weeks in isolation away from family and friends to compete multiple times in that time span against hungry pro fighters who you share a house with is an incredibly difficult journey to the UFC.

For eventual TUF Nations’ welterweight winner Chad Laprise, the tournament was an even tougher test, as “The Disciple” had to tangle with two friends and teammates in Kajan Johnson in the semis and Olivier Aubin-Mercier in the finals.

“The Olivier fight was the biggest fight of my life to date,” Laprise affirms. “I had to win that fight no matter what. I was fighting a good friend of mine, a teammate. We had trained together for three years on and off before that fight and then we lived together on the show too. I had a personal relationship with Olivier, but I know and he knows that fighting is a business. When we fought for those 15 minutes, it was business. Luckily, I was blessed enough to win and we have no hard feelings at all between me and him.”

The undefeated 28-year-old earned a unanimous decision win over Team Australia’s Chris Indich in his first house bout, which won the Fight of the Season bonus, then Laprise followed that up by winning the Performance of the Season bonus by scoring a jaw-breaking knockout of Johnson in his second house bout. At the April finale, The he fought a classic “striker vs. grappler” matchup as he faced his Tristar gym teammate Aubin-Mercier, who owned a 5-0 record with all his wins by first-round submission.

“I was happy with my performance, but there was definitely room for improvement,” Laprise reveals. “At the time they announced the split decision, I really didn’t know it was close. After watching the fight again, I feel like I definitely won the fight. He’s super dangerous on the ground, he’s such a good grappler and I knew that going in. I had to be very cautious on the feet to not be taken down. I wasn’t really able to let loose on him and really open up my strikes. I really stuck to 1s and 2s. I fought a good, smart fight, but my next fight will definitely be more exciting.”

A “smart” fight for Laprise can be seen in the statistics, as he peppered Aubin-Mercier with 90% of his significant strikes at distance, including landing 23 of 24 leg kicks while stuffing seven of nine takedown attempts. It was a technical effort by Laprise, showing great movement, defense, timing and judgment against a tricky and dangerous opponent who knows The Disciple’s game very well.

Laprise’s calculating approach in his Octagon debut was more of an aberration, as he loves to uncork his punching power, which has netted him five of his nine pro wins by KO.

“If you look at that fight and you look at the fights in the house, I fought that fight more safe,” Laprise said. “It was because he’s so awkward on the feet, he’s a southpaw, he doesn’t really throw things how he’s kind of supposed to and I had to respect his takedowns. Him and I have trained together so much that I knew that he’s way better than me on the ground. If he got me in a bad position, I would have lost that fight. I had to stick to straight punches, leg kicks, and luckily I came out with the win.”

Up next, another clash in Canada as the Ontario native will travel to Halifax to take on Yodenis Cedeno at UFC Fight Night: MacDonald vs. Saffiedine. Returning to his original division of lightweight, Laprise will meet the Cuban Cedeno who is coming off a first round TKO inside the Octagon in July. With a 10-3 pro record, Pink Panther is an explosive and unconventional stand-up fighter with seven wins by KO and he has yet to be finished by strikes. Laprise is psyched not only at another chance inside the Octagon, but to compete in front of his people and not against a fellow countryman.

“I was super excited to get the call to fight in Canada again,” Laprise said. “My last fight was in Canada, but I was fighting Olivier in Quebec and I kind of got booed because he’s the hometown guy. It’s pretty nice for me to be the hometown guy now. Yosdenis is a super tough guy. Right away, I was super pumped for this match-up. I’m fighting another striker. He’s not like Olivier - but he’s different. He’s awkward. He has a karate background and throws a lot of spinning kicks. He’s a dangerous guy and I’m looking forward to getting in there and fighting with him. I can’t wait.”

In preparation for Cedeno, Laprise has moved to Montreal to train full-time at the renowned Tristar Gym. The striking specialist who started with the original Team Tompkins is now sharing the mats day in and day out with head coach Firas Zahabi’s famed crew, which includes Aubin-Mercier, Nordine Taleb and Rory MacDonald, who are all on the Halifax card as well. Also, The Disciple works with strength and conditioning coach Jonathan Chaimberg, Muay Thai coach Kru Ash and with the talented boxers at Grant Brothers Boxing.

“You’re going to see good, crisp, clean technique,” Laprise states. “I truly believe God put me in this world to be a fighter right now and I work hard at this every single day. I train two or three times a day, every single day. I think I’m one of the most dedicated guys in the world of MMA. I train with some of the best fighters in the world and there’s not many people who have my work ethic and it will show October 4th. I’ll be 100% prepared and you’ll tune in for an exciting matchup. I guarantee in this matchup with Yodenis, this fight is going to be fireworks. He’s going to bring it too and it’s going to be very exciting.”