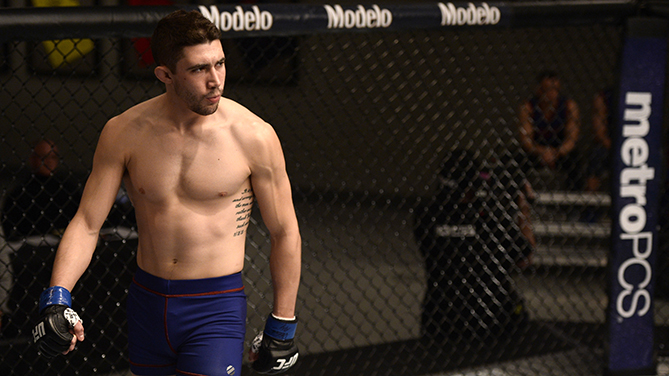 The first finalist on this season of The Ultimate Fighter: Undefeated is set following a lightweight clash between a pair of athletes training under heavyweight champion Stipe Miocic.

Before the fight got started this week, it was all about preparation and getting through the final days of the show as the tournament begins to wind down over these next few weeks.

With his team on the sidelines this week, light heavyweight champion Daniel Cormier decides to make the most of the time by bringing in a pair of top UFC fighters to work with his athletes. UFC featherweight champion Max Holloway and former middleweight king Luke Rockhold stop by to impart some knowledge and help these fighters understand the mindset needed to compete on the biggest stage in the world.

Holloway even sat in during a sauna session to answer questions from the other fighters, including how he went on an unprecedented 12-fight win streak while becoming featherweight champion after suffering a loss to Conor McGregor.

Meanwhile, the entire cast of fighters get a chance to show off their talents in a show put on inside the house ahead of the semifinals getting underway.

The star of the show is John Gunther, who has become one of the favorite fighters amongst the athletes competing this season. Gunther's quirky attitude and hilarious take on just about anything, from his alpaca impression to the way he chooses to sleep on the ground at night as opposed to a bed, seems to keep his training partners entertained.

"Gunther needs his own show," Tyler Diamond said. "He is the most interesting guy in this house"

Of course, as entertaining as Gunther might be, he's more interested in earning a spot in the live finale on July 6 by getting through his Team Miocic teammate Mike Trizano in the semifinal matchup this week.

Gunther suffered a first-round submission loss in his opening round bout and he's been anxiously awaiting a chance to prove himself if he got back into the tournament. Of course, Trizano definitely had something to say about that after he earned his way into the semifinals with an impressive TKO victory over Team Cormier's Thailand Clark.

As much as Trizano respects Gunther as a teammate, he's not giving up his dream for anybody else.

"The Lone Wolf is going to go in there and feast on John's flesh," Trizano said before the fight got underway.

ROUND 1
Gunther is quick to pressure forward, looking to go after Trizano aggressively in the opening moments of the fight. In return, Trizano just steps back and finds his range to begin returning fire with counter shots. Trizano begins finding a home for a stiff left jab that snaps Gunther's head back before the Ohio native rushes forward and secures a takedown against the cage. Gunther maintains control on the legs as he starts peppering away with punches while keeping Trizano trapped against the cage. The action slows for a minute, which forces Gunther to press the pace a bit more, but that allows Trizano enough room to make an attempt at a brief guillotine choke. Gunther gets free but Trizano is able to work his way back to the feet. Locked in the clinch, Gunther begins delivering knees to the body before Trizano finally breaks free to reset in the center of the Octagon. Trizano starts landing at range with some very stiff shots that are really eating Gunther up. Gunther rushes forward but gets caught in another guillotine choke. Unlike his first fight, Gunther finds a way to get free but he's still taking a ton of punches when they work back to the feet. Trizano is surgical with his punches, leaving Gunther busted up with a cut on his face as the first round comes to an end.

ROUND 2
Trizano is quick to establish his dominant striking as the second round gets underway. He's potshotting with quick, rapid fire combinations that are catching Gunther at every turn. Gunther finally decides to switch back to his grappling but he's unable to get Trizano to the ground. The fighters reset and Trizano lands another stinging combination, but Gunther is able to rush forward with a single leg takedown to get the fight back down to the mat. Gunther is able to lay Trizano out as he starts firing off with short shots to the head and body. Trizano does a good job of avoiding any damage as he briefly works his way back up, but Gunther is quick to drag him back down again. Gunther is showing strong top control but he's not doing much damage. The fighters eventually work back to the feet and Trizano immediately starts pouring on the punishment, including a big knee strike that catches Gunther flush. Trizano switches up his game plan and goes for a takedown of his own, landing on top of Gunther. Gunther attempts a reverse triangle choke from the bottom but Trizano is able to resist the submission until the round ends.

ROUND 3
Trizano opens with a stiff leg kick to the calf with the coaches believing the fight is tied up at one round apiece. Trizano starts letting his hands go as he lands several hard punches in a row, including a nasty right hand that slams home on Gunther's face. Trizano begins firing off a nasty right uppercut that snaps Gunther's head up. Gunther is a little slower with his attempts to get inside and it's allowing Trizano time to land a more precise striking counter attack. Gunther is finally able to rush forward with a takedown attempt but Trizano resists and eventually reverses position before releasing back to the center of the Octagon. Trizano is light on his feet as he continues to set up his combinations with Gunther having no answer to the striking attacks. 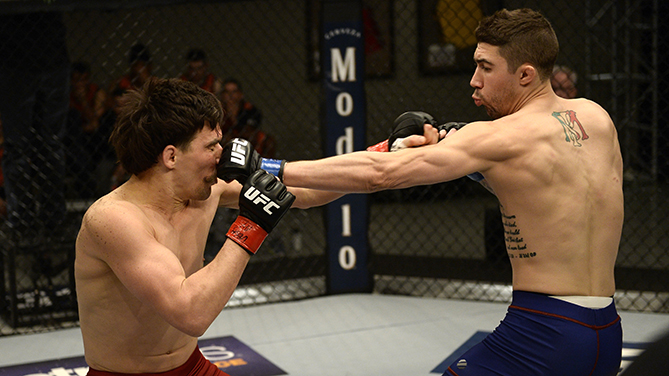 Gunther is still pressuring forward, but without setting up his takedowns he's just eating punches, with Trizano measuring him every time. With less than a minute to go, Trizano lands a pair of takedowns as he begins punishing Gunther on the ground with punches before separating back to the feet as the final horn sounds on the fight.

"My hands are killing me. John's got a freaking hard head," Trizano said after the win. "Ever since I started training, this has been my goal and I'm just one win away from achieving it."

With Trizano now standing as the first fighter in the finals, a featherweight competitor will join him there next week when the focus shifts to the battle between two Team Cormier athletes.
Unassuming Canadian Brad Katona will look to continue his run through the tournament when he takes on "Thug Nasty" Bryce Mitchell.

Who will join Trizano in the finals? Tune in to The Ultimate Fighter: Undefeated next Wednesday night at 10 pm ET on FS1 to find out.