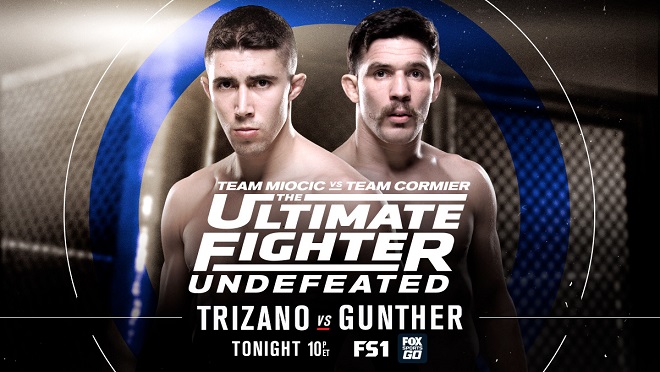 Following the final fight of the opening round a week ago, the semifinals are set to begin on the latest episode of The Ultimate Fighter: Undefeated, with a pair of Team Miocic fighters about to square off.

Mike Trizano was one of the only fighters from heavyweight champion Stipe Miocic's team to earn their way into the second round after he won his first bout, and now he's looking to punch his ticket to the finals with another strong performance this week.

Opposing him will be fellow Team Miocic fighter John Gunther, who will be making his return to the tournament after replacing lightweight competitor Luis Pena after he was forced out of the competition due to injury.

With Trizano and Gunther facing off this week, Miocic will be bowing out of head coaching duties as he turns the job over to his assistants to get the fighters ready so he won't have to pick and choose between the athletes from his own team.

For Trizano, this is a chance to remain one of the favorites to win the entire competition after he had one of the most impressive outings on the show to date with his second-round TKO to defeat Team Cormier fighter Thailand Clark.

Trizano is a blue-collar striker with good power in his hands and a solid grappling game while also being one of the biggest fighters in the entire tournament. Trizano's size and reach are going to be a problem for anybody and he's looking to ensure his spot in the live finale on July 6 with a win in tonight’s episode.

As for Gunther, he's looking for redemption after a disappointing outing in his debut matchup against Team Cormier's Joe Giannetti. Gunther was the first fight of the season but he only lasted a matter of seconds after Giannetti locked up a nasty guillotine choke in the opening round that put the Cleveland native to sleep after a very brief exchange to start the action.

Gunther has been itching for a second chance ever since, and last week UFC President Dana White opted to bring him back into the competition with a shot to redeem himself. To get to the finals, however, Gunther is going to have to go through his teammate, as well as one of the favorites to win the entire competition in Trizano.

Elsewhere on the upcoming episode of The Ultimate Fighter Undefeated, the athletes will get a chance to race some exotic cars in a rare opportunity to leave the house for a few hours that doesn't involve training.

The fighters will also put on a talent show this week that will be both hilarious and convincing that the athletes probably chose the right profession by going into mixed martial arts rather than entertainment.

As the time on the season begins to wind down with only a few fights left to go, UFC light heavyweight champion Daniel Cormier will also look to offer his athletes a few perks as they look forward to continuing their career after the show is finished.

To help add some knowledge to his team in these final days, Cormier calls on his teammate and close friend, as well as former middleweight champion, Luke Rockhold, as well as reigning and defending featherweight champion Max Holloway to stop by and spend some time with his fighters.

Rockhold has been a champion in both the UFC and Strikeforce, so he definitely understands the mindset for what it takes to compete at the highest levels. As for Holloway, he has proven himself to be the best featherweight on the planet with an incredible 12-fight win streak, including back-to-back victories over former champion Jose Aldo.

Needless to say, Rockhold and Holloway will offer a lot of information that can help the fighters now and in the future.

With Team Cormier on the sidelines this week working alongside Holloway and Rockhold, the attention will then shift back to Team Miocic for the first semifinal fight of the season.

When it comes down to the matchup, Trizano will definitely be the favorite going into the fight not only because of the skill he showed in his first bout, but also because of the weapons he possesses in his overall mixed martial arts arsenal.

Trizano is a dangerous striker with long reach and very good hands. Trizano isn't much of a kicker, but that probably plays better into his style for this fight, with Gunther likely looking to drag him to the mat. Gunther isn't a technical stylist in any facet of the game, but he's incredibly tough, very durable and a beast when he's able to get an opponent down on the ground and maintain control from the top.

Gunther won't be the one wowing anybody with his striking acumen or grappling excellence, but he always seems to find a way to turn his fights into a brawl and that's where he tends to succeed. Gunther needs to make this fight ugly and that's how he can take advantage of the slightest mistake that Trizano might make.

On the flipside, Trizano needs to be patient with his striking attacks and set up counters, as Gunther will undoubtedly look to come out aggressively with takedown attempts. The real key will be Trizano's ability to hurt Gunther every time he gets inside, and for the Ohio native, he has to be relentless with his takedowns and never give his Team Miocic training partner an inch to breathe.

It's a tough fight to call and Miocic will undoubtedly be sitting on pins and needles throughout until a winner is declared.

Who will be the first finalist this season? Tune in to The Ultimate Fighter: Undefeated tonight at 10pm ET on FS1 to find out if it's Trizano or Gunther moving on to the finale.