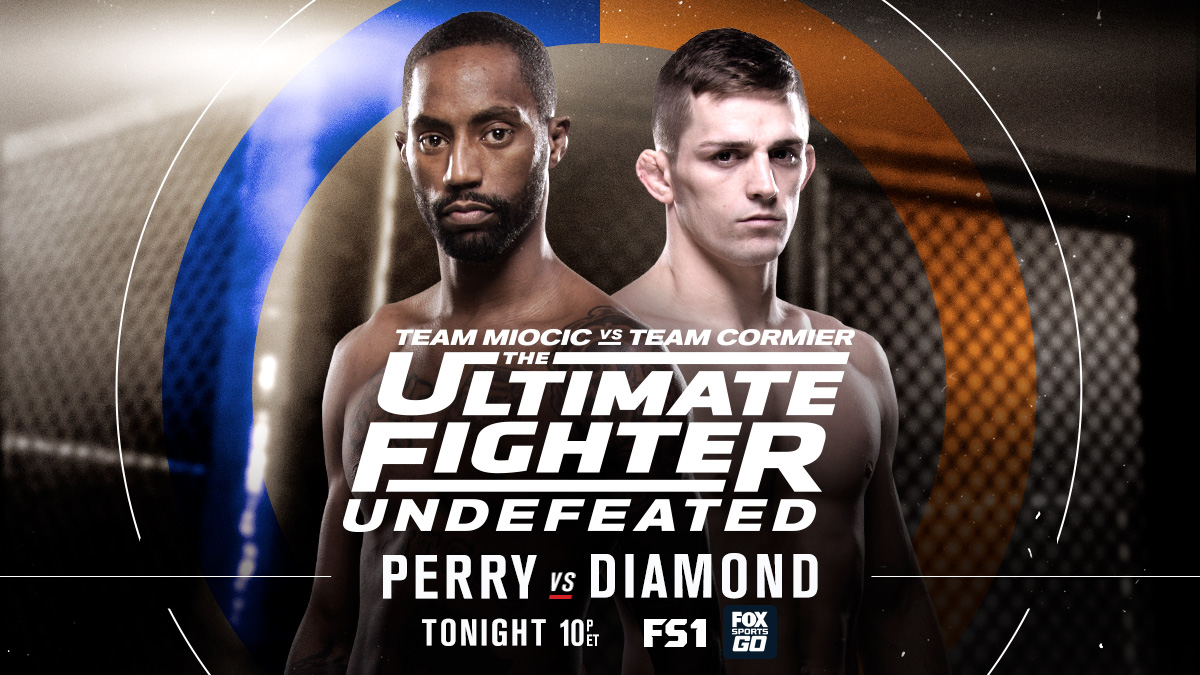 Following one of the more bizarre situations in Ultimate Fighter history last week, the final fight of the opening round will take place in the latest episode, and we will also see the announcement of the semifinal matchups on TUF: Undefeated.

Last week's episode featured a ton of drama but no actual fight after Team Cormier lightweight Richie Smullen experienced severe cramps in his legs that kept him from fighting in the competition. Every effort was made to allow Smullen time to recover, but his calves were locked up and not responding, which left no choice but to eliminate him from the tournament.

That meant Team Miocic fighter Allan Zuniga would move onto the second round without actually fighting. Zuniga was visibly upset because he wanted to prove himself inside the cage rather than just get a free pass, but ultimately he was pushed through to the semifinals where he will receive a new matchup this week.

With Smullen eliminated, the final fight of the opening round will take place this week as Team Cormier's No. 1 overall pick Tyler Diamond will finally step into the Octagon as he faces off with outspoken Team Miocic fighter Dulani Perry.

Perry has been one of the loudest fighters in the house all season long, yet he still hasn't actually competed until now.

Hailing from Queens, New York and now training out of Houston, Texas, Perry basically crowned himself champion before the season even began as he was running his mouth to everybody in the house about his status as "The Fight God." On top of that, Perry has no problem whatsoever flashing his expensive clothes, jewelry or lifestyle while most fighters on the show are struggling to make it by while trying to earn their way to the biggest stage in the sport.

"I'm loud, I'm arrogant, I'm cocky," Perry says about himself in the latest episode, and he is definitely not apologetic for anything he's said this season, much less the bold predictions he's made about his run through the tournament.

Who will get the 'W' tonight?

Outside of his loud mouth, Perry is 4-0 in his fight career with all of those bouts taking place in Legacy Fighting Alliance, which is an organization responsible for graduating a ton of athletes into the UFC over the years. Perry doesn't have as much experience as some of the other competitors, but he's definitely an interesting prospect, standing 6-feet tall as a featherweight with long range and good kickboxing.

Perry will undoubtedly look to keep his fights standing, as he prefers a striking battle, but with those long limbs, he can wrap up some chokes if the opportunity presents itself.

On the other side of the Octagon this week stands Tyler Diamond, who was not only the top overall pick by light heavyweight champion Daniel Cormier, but he also has to be considered one of favorites to make it all the way to the finals of this competition.

Diamond trains out of Team Alpha Male in Sacramento, Calif. where he works under UFC Hall of Famer Urijah Faber as well as a laundry list of top athletes, including former bantamweight champion Cody Garbrandt, two-time title challenger Chad Mendes, top 10-ranked featherweight Josh Emmett and a slew of other Octagon veterans.

Team Alpha Male is recognized as one of the best training camps in the world for the lighter divisions, so there's no doubt that Diamond was well prepared for this tournament before it even started.

Diamond is 9-0 in his career with six finishes, including five of those wins coming by way of knockout. Diamond's background is in wrestling, where he competed at both the junior college and Division I level after transferring to North Dakota State University, which is part of the Big 12. While Diamond never made it to All-American status, he was in a league with some of the toughest competition in all of wrestling, with schools like Oklahoma and Oklahoma State butting heads against him during the season.
RECAP LAST WEEK'S EPISODE

Diamond has transitioned effortlessly into mixed martial arts under the tutelage of fighters like Faber, who came from a very similar background out of wrestling into the cage.

There's a reason why Diamond was the No. 1 overall pick, as his wrestling will be tough to beat by anybody in the competition, much less going up against a fighter like Perry, who is best known as a striker.

If there's a downside to having those kind of credentials, as well as being the top pick in the competition, it's that Diamond might be a little overconfident going into his fight against a very loud Dulani Perry.

Diamond knows he's the favorite, but as he begins his preparation this week, head coach Daniel Cormier has to remind him that anything can and usually will happen inside the Octagon, so the last thing he can afford to do is look past Perry like it's a foregone conclusion that he'll win.

That's the kind of attitude that can end with a spectacular knockout and wondering what just happened as you wake up staring at the lights.

Once Diamond and Perry settle the final fight in the featherweight division, it will then be time to determine the semifinal matchups in the tournament.

Obviously, with Luis Pena and Ricky Steele already ruled out due to injury, two fighters will have to be brought back into the competition. Team Miocic fighters Jay Cucciniello and John Gunther have already been very vocal about getting a second chance this season. And while Team Cormier has sent more fighters through to the second round, Thailand Clark is still available and could it be possible that Richie Smullen would be healthy enough to return?

Find out when the next episode of The Ultimate Fighter: Undefeated airs tonight at 10 pm ET on FS1.