It's no secret that things have not been going very well for Team Miocic to this point in the season on The Ultimate Fighter: Undefeated.

Four fights into the competition and UFC heavyweight champion Stipe Miocic has yet to see a fighter from his squad stand in the winner's circle while his upcoming opponent at UFC 226, Daniel Cormier, has been celebrating non-stop since the show first began.

Last week saw another tough defeat for Team Miocic as Bryce Mitchell was able to outwork Jay Cucciniello over two rounds to earn a victory in the featherweight division. In the next episode, the lightweights are back up again with Miocic's No. 1 pick Mike Trizano finally getting his chance to prove why he was the top selection as he takes on Team Cormier's Thailand Clark.

More than anything, going into the latest episode we will see Team Miocic trying to change the mindset of the fighters still left in the competition after starting 0-4 on the season.

Marc Montoya, who is one of Miocic's assistant coaches and the head coach of the Factory-X gym in Colorado, does his job this week by firing up the troops and reminding them that the season isn't even halfway over yet and there's still plenty of time to even up this competition.

Throughout the history of The Ultimate Fighter, more than a few teams have gone down in the hole by losing the first four or even five fights of the season, but that doesn't mean the rest of the athletes have to just roll over and play dead. Instead, this gives the remaining fighters that much more motivation to go out there and succeed to prove the naysayers wrong.

Of course, that puts a lot of pressure on Trizano to shine this week, but he wouldn't have it any other way.
RELATED CONTENT: UFC Minute - Trizano and Clark set to square off on Clark | Recap last week's episode

Trizano comes to the show with a 6-0 record as well as an undefeated resume as an amateur training out of Team Tiger Schulmann in New Jersey. That gym is also responsible for current top five-ranked UFC bantamweight contender Jimmie Rivera, so there's definitely some talented athletes emerging from that facility and Trizano hopes to be the next one to make it big.

One look at Trizano's record shows that he's a very well rounded fighter, as his wins have come by a variety of methods including knockouts and submissions. Trizano will probably be the first one to say that he loves to strike first and foremost, and standing at 5-foot-11-inches tall doesn't hurt matters much because he'll have a size and reach advantage over most of his opponents.

That long, lanky body allows Trizano to control the distance as he likes to use his reach both with his hands and his kicks. Trizano is also well versed with his submission arsenal because he'll definitely make someone pay for shooting in on him without setting up the takedown. Trizano has a nasty anaconda and a brabo choke that he'll definitely use if Clark makes the slightest mistake trying to get this fight to the ground.

On the other side of the Octagon stands Thailand Clark, who first got recognized this season after getting into a shouting match with his head coach during one of the training sessions. With everyone on the show fairly experienced, it's easy to understand how conflicts may arise when different methods are being used in preparation for an upcoming fight. That caused a clash with Clark and one of his teammates, which then led to a falling out with Cormier.
Thankfully cooler heads prevailed and Clark ended up grappling with Cormier for the remainder of the training session. Now Clark will attempt to put all that good work to use when he faces Trizano in the latest lightweight matchup of the season. 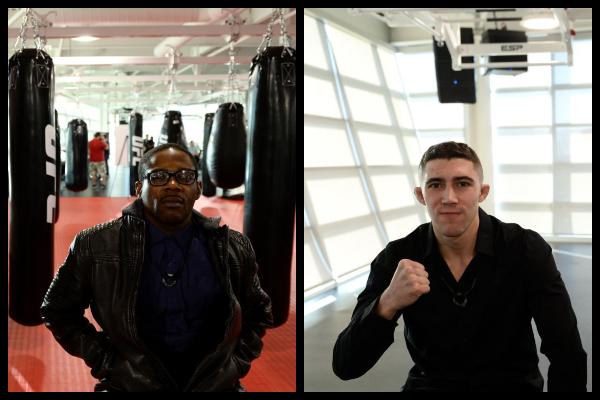 Clark hails from Fort Worth, Texas, where he holds a 7-0 record with five decision wins as well as one TKO and a submission on his resume. Clark is a slick grappler with solid kickboxing in his arsenal as well and, as it turns out, his reach will almost be exactly the same as Trizano’s so that will definitely help him in this fight.

Clark is a grinder at times as well, which bodes well for him pushing the pace for these two-round fights that make up the first two rounds of the tournament. Clark's ability to slow down the action and then really ratchet up the pressure on Trizano should serve him well in the fight.
The real key comes down to Clark's ability to potentially drag the action to the mat to negate Trizano's striking advantage. On the flipside, Trizano has to know that keeping Clark at distance while working his long range striking attack will be his fastest path to victory. Of course, Trizano has never been afraid of going to the ground in any of his previous fights, so it's not likely he'll shy away from that in this bout either.

Elsewhere on the show this week, another fighter deals with a training injury in the aftermath of what happened to Luis Pena a week ago. Sadly, Pena won his first round fight but was then forced out of the competition with a fractured foot. This time around it's a fighter from Team Miocic who deals with an injury sustained in training. and with time winding down in the opening round, there's only so much that can be done for recovery.

It also doesn't help matters much that the fighters are always in close quarters with each other. so the slightest ailment for one person is soon common knowledge amongst everybody on the show. In the past, coaches have even called for fights against athletes who were knowingly not 100 percent because it gives them a strategic advantage.

Will that happen again this season?

Tune in to the next episode of The Ultimate Fighter: Undefeated to find out. Plus, see the latest matchup between Trizano and Clark as Team Miocic tries to stave off an 0-5 start in the competition. The newest episode airs tonight at 10 pm ET on FS1.