Luis Pena - better known as "Violent Bob Ross" - kept Team Cormier in control in the most recent episode of The Ultimate Fighter: Undefeated with a unanimous decision win over Jose Martinez Jr.

The victory moved Team Cormier to 3-0 in the competition, and they look to stay undefeated when featherweight Bryce Mitchell gets his opportunity against Team Miocic fighter Jay Cucciniello.

Before the fight gets started this week, Pena is forced to deal with the fallout from his two-round battle with Martinez that ended with a win but also left him feeling less than 100-percent, with his left foot giving him a ton of trouble.

Pena used his range very well during the fight thanks to his size and reach advantage, and numerous times throughout the two-round bout, he was tagging Martinez with a series of kicks to the legs, body and head. The continued punishment racked up a lot of points on the judges' scorecards but it also added up the damage on Pena's lead foot as he battered Martinez throughout the fight.

It's @ThugNastyMMA's time in the spotlight on the next episode of @UltimateFighter. #TUF27 pic.twitter.com/IJqbsFyDvi
— UFC (@ufc) May 8, 2018

The end result was that Pena left limping as he hopes that this injury isn't anything too severe that might force him to miss out on training or in the worst case scenario that he might be forced to leave the house if the foot is actually broken.

Of course, Pena isn't alone in the history of athletes walking away victorious and then being unable to continue in the competition due to injury.

Back in season 20, when The Ultimate Fighter was crowning the first ever UFC strawweight champion, Justine Kish never even got the chance to compete thanks to an unfortunate knee injury that knocked her out of the competition. Even further back during season 13, Myles Jury fought his way into the house but ended up with a torn ACL in his knee that forced him off the show and out of action for the better part of a year.

Obviously, Pena is hoping for the best as he deals with the foot injury after picking up a win in the third fight of the season.

Elsewhere in the latest episode, we will get to know the two competitors from the featherweight division who will clash in an attempt to make it into the next round of the tournament.
RECAP LAST WEEK'S EPISODE

Bryce Mitchell is certainly an interesting character on the show this season, as he comes in with a perfect 9-0 record at just 23 years of age hailing from Arkansas. One teammate called Mitchell “a little redneck Nate Diaz,” considering his thick Southern accent, his submission-heavy style and the fact that he doesn't seem like he gives a…well, you get the point.

Mitchell definitely isn't the most conventional fighter in the house, as he relies on his submission arsenal but he's definitely not afraid to scrap it out with anybody on the feet either. With a nickname like “Thug Nasty,” you can guarantee that you'll never expect what this kid is going to throw at you. He calls his style “pretty ghetto,” but he always seems to get the job done. Through his nine victories, Mitchell has only been to a decision one time with every other fight ending by way of submission.

Standing across the Octagon from Mitchell this week will be Team Miocic featherweight Jay Cucciniello, who joins the show with an 8-0 record hailing from the United Kingdom but actually fighting out of a gym based in Spain.

Before he focused on his mixed martial arts career, Cucciniello was actually a member of the armed forces in England, serving tours of duty in Iraq and Afghanistan. Throughout his military service, Cucciniello saw plenty of blood and bombs, including two separate incidents where his vehicle was blown up by an IED (improvised explosive device). Sadly, during his time spent overseas, Cucciniello lost two of his best friends and he saw dozens of other soldiers lose their lives during the conflict. 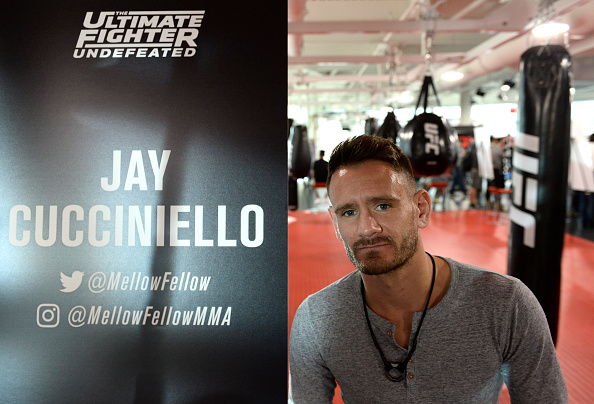 Unfortunately, Cucciniello has dealt with a lot of loss in his life after his mother passed away when he was just four years old and his father died when he was just 11. Cucciniello even dealt with the worst possible scenario just ahead of his fifth professional fight when he found out that his brother had died that day, but he decided to go out and honor him by competing that night.

With a heavy heart, Cucciniello still got the job done with a submission victory to remain undefeated in his career before dedicating his performance to his brother.

That kind of toughness is what Cucciniello believes defines him best and makes him such an impossibly bad matchup for anybody stepping into the Octagon with him.

"Mentally, I'm as strong as they come," Cucciniello said.

When it comes to the actual matchup, Mitchell and Cucciniello are both ultra aggressive fighters who push the pace and always go for the finish. In fact, in their 17 combined professional fights, there's only that one decision between the two of them.

Cucciniello has a mix of knockouts and submissions on his record, but considering Mitchell's ground game, it may give the Team Miocic fighter a better opportunity to win if he can keep this fight standing. That being said, Mitchell is like a buzzsaw moving forward and he will definitely look to drag this fight to the mat, especially if Cucciniello shows off his hands in the early going.

Of course, the pressure is ratcheted up on Cucciniello with Team Miocic down 0-3 in the competition, so that will definitely up the intensity between the fighters as well.

Can Cucciniello get Team Miocic on the board or will Mitchell continue the dominant run for Team Cormier through the tournament this season?

Tune in to the latest episode of The Ultimate Fighter: Undefeated tonight at 10pm ET on FS1 to find out.