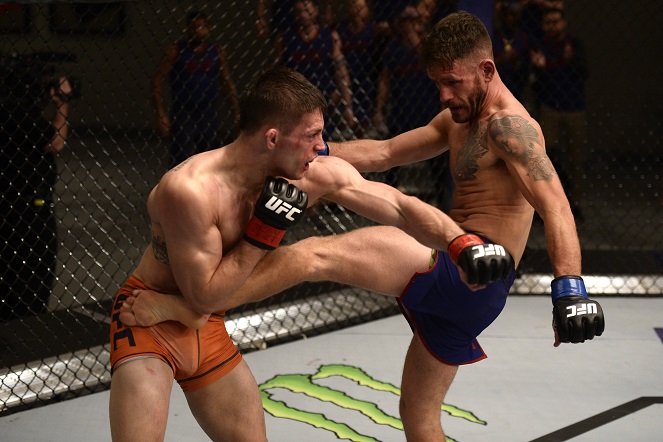 The finals of The Ultimate Fighter: Undefeated are set following the last fight of the season, and Jay Cucciniello vs. Tyler Diamond did not disappoint.

Before an absolute war unfolded in the featherweight final, both athletes prepared for the matchup with a last bit of study with head coaches Daniel Cormier and Stipe Miocic.

Breaking down fight video, Cormier believed that Diamond could absolutely dominate Cucciniello if he went out with the right game plan and the determination to get the job done.

"Show him that he doesn't belong in there with you," Cormier told Diamond. "Just beat on him."

Meanwhile, Cucciniello knew that his fight with Diamond was possibly the only shot at redemption he might get to prove to UFC President Dana White that he belonged there. Cucciniello had lost his previous fight to Bryce Mitchell and only got back into the competition after Ricky Steele suffered an injury in his bout.

"Losing my fight to Bryce I still visualized my hand being raised and that opportunity came. I grabbed it with both hands," Cucciniello said.

Cucciniello wanted to make the most of his second chance and he certainly lived up to the billing as he put on one of the best performances in the history of The Ultimate Fighter in his epic matchup against Diamond in the last semifinal of the season.
THE ULTIMATE FIGHTER FINALE PREVIEW | PREVIEW GIANNETTI VS TRIZANO

The fighters are both throwing kicks early and Diamond connects with a huge overhand right that puts Cucciniello on wobbly legs. Cucciniello does his best to recover but as soon as he backs away, Diamond slams home another massive right hand that drops him to the canvas. Diamond follows him to the ground looking for the finish but Cucciniello is able to recover long enough to stave off the stoppage before working his way back to the feet. Cucciniello is definitely still rattled but he's throwing back at Diamond with full aggression. Diamond decides to alter his game plan as he goes for a big takedown. Diamond gets the fight down to the ground but the action is short lived on the mat as they work their way back to the feet in quick order. Diamond pressures Cucciniello to the cage where he begins a dirty boxing attack with short punches on the inside while still working towards a potential takedown. The fighters separate and Diamond clips Cucciniello with another stiff shot that buckles his knees for a moment. This time, however, Cucciniello comes back with a big punch of his own that rattles Diamond and forces him to push forward for the takedown again. Diamond is maintaining control against the cage as he works for the takedown but Cucciniello is playing good defense. By the end of the round, Cucciniello is starting to land with more rhythm and power as Diamond beings slowing down.

Diamond comes out aggressive once again, pressing forward and landing a stiff jab on Cucciniello's chin. Cucciniello stays patient in the pocket and is able to take the center of the Octagon as he begins pursuing Diamond around the cage. Cucciniello is showing poise with his combinations, tagging Diamond with good stinging shots and not taking as much damage as in the first round. Cucciniello digs a nasty right hand to the body as Diamond is swinging wildly and not connecting nearly as much as he was previously. Cucciniello continues to do work to the body before going back up to the head again with a series of left hands. The continued shots force Diamond to rush forward as he secures a brief takedown, but Cucciniello is quick back to his feet as they get locked up against the cage. Diamond is still pushing forward with the clinch. Cucciniello is able to work free and reset in the center as the fighters begin exchanging bombs again. Diamond tags Cucciniello with a couple hard straight punches but he doesn't have as much pop behind his shots now. Cucciniello is able to walk through those punches and continue to press forward as he continues to do a ton of damage to the body while stuffing Diamond's repeated takedown attempts. With 10 seconds remaining in the round, Cucciniello is absolutely battering Diamond to the body repeatedly until the horn sounds.

With the win, Cucciniello will now move on to the live finale on Friday night, July 6, where he faces Brad Katona to determine the featherweight winner of The Ultimate Fighter: Undefeated. 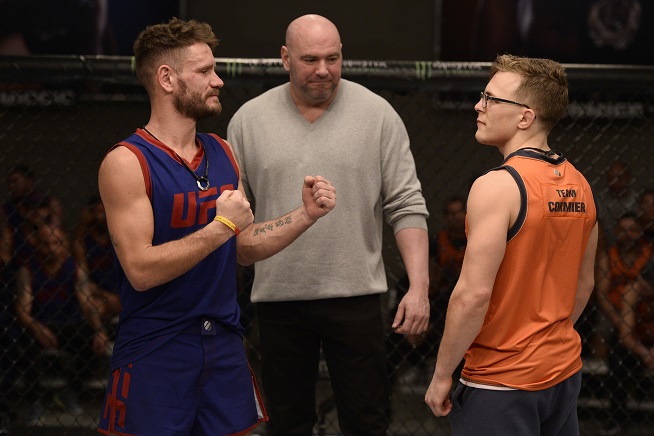 "It's important to take advantage of every opportunity. Coach Marc [Montoya] kept saying that to me all season. I didn't capitalize on my first opportunity and I knew I had to with my second one," Cucciniello said following his win. "In life I can't be beaten and I just kept thinking that and went in there and got it done.

"Brad is a top guy and we have gotten on really well, but this is business and I'll be ready to fight him at that finale."

In the other half of the finale, Team Cormier's Joe Giannetti will take on Michael Trizano from Team Miocic to determine the lightweight winner from the show.

All of this takes place on Friday night at The Ultimate Fighter: Undefeated Finale, and then 24 hours later the coaches will face off with the heavyweight title on the line as Stipe Miocic takes on Daniel Cormier in a SuperFight for the ages in the main event of UFC 226.

Don't miss a second of the action with The Ultimate Fighter Finale on Friday and then UFC 226 on Saturday as International Fight Week 2018 continues.