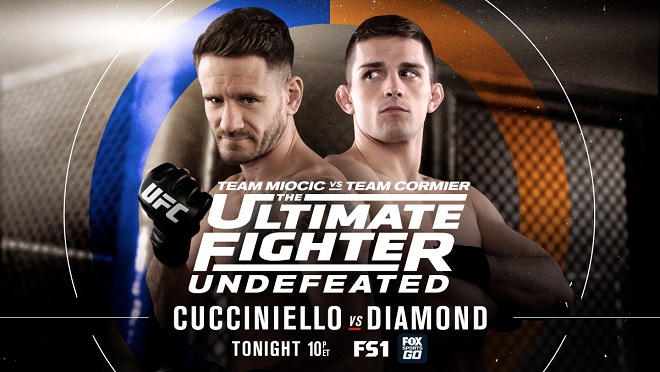 It's all come down to this as The Ultimate Fighter: Undefeated concludes tonight on FS1.

It's been a season filled with dominant performances, more than a couple of upsets and plenty of heart wrenching moments when several fighters were forced out of the competition due to injury. There have also been a few jaw-dropping finishes and a couple surprises that no one probably saw coming until they happened.

And, of course, coaches Stipe Miocic and Daniel Cormier attempted to play hockey against each other ahead of their super fight at UFC 226.

Following 10 fights thus far in the season, the final matchup is about to take place as Tyler Diamond from Team Cormier will face off with Jay Cucciniello from Team Miocic to determine the other featherweight finalist who will then meet Brad Katona on July 6 in Las Vegas.

For Diamond, it almost feels like destiny that he's made it to the semifinals after starting out the season as Cormier's top selection in the featherweight division.

Diamond came to the show with a championship pedigree while working with Team Alpha Male in Sacramento, where he's getting knowledge from fighters like UFC Hall of Famer Urijah Faber, as well as former bantamweight champion Cody Garbrandt. Add to that, Diamond had plenty of fighters from his own division to work with on a daily basis, including two-time title challenger Chad Mendes as well as top 10-ranked featherweight Josh Emmett.

Diamond certainly looked like a future finalist in his opening bout on the show as he dismantled Dulani Perry over the course of their fight before ending it with a second-round guillotine choke submission. Diamond showcased incredible grappling skills with arguably the best wrestling in the house this season, and he's also one of the more physically gifted athletes on the show.

There's a reason Cormier selected him No. 1 overall, and the light heavyweight champion seems very confident that Diamond will punch his ticket to the finale with his performance in the last episode of the season.

Before the fight begins this week, Cormier will step out of the cage to sit down with Diamond in a video session to break down what lies ahead with Cucciniello as an opponent.

Cormier might be one of the very best analysts working in mixed martial arts today thanks to his vast knowledge of every facet of the sport. Throughout his time calling fights as part of the UFC broadcast team, Cormier has been outstanding at breaking down replays and footage from the bouts as he shows exactly how a certain strike or ground maneuver was set up and then executed.

Now Cormier will put that knowledge to use in helping Diamond get ready for his showdown with Cucciniello.

As for the last remaining member of Team Miocic, Cucciniello knows that this is his shot at redemption after losing his opening round matchup against Bryce Mitchell earlier in the season.

Cucciniello felt like he was also one of the favorites who would earn a spot in the live finale, but he came up short in his matchup against a highly touted grappler in Mitchell. That's exactly how the fight played out as well, with Mitchell being able to control the distance and use his grappling to negate Cucciniello's best weapons throughout their fight.

Immediately afterwards, a disappointed Cucciniello was quick to ask UFC President Dana White for a second shot, even offering to move up to lightweight to replace Luis Pena, who had already suffered an injury during the season. Cucciniello was determined to get a second chance, so when another injury knocked out Ricky Steele, he was quick to throw his name back into the hat for an opportunity to re-enter the tournament.

White ultimately decided to give Cucciniello the chance and now he'll have to back it up this week when he takes on arguably the No. 1 featherweight in the entire competition.

Cucciniello came to the show with a perfect 8-0 record and a reputation as a devastating finisher, so don't doubt that he can put together the kind of performance that will really test Diamond in this matchup. Cucciniello is a long, lanky striker with good kickboxing and an underrated ground game.

It's not likely that Cucciniello will look to test his ground skills against a wrestler the caliber of Diamond, but also don't discount the fact that he could pull off submissions like the D'Arce choke or the anaconda choke if he can sprawl out of his opponent's takedown attempts. The key for Cucciniello will be staying off his back and not allowing Diamond to completely control the pace of this fight.

If Cucciniello is stuck backing up and playing counter fighter with Diamond in his face the entire fight, it could be a bad night for the Team Miocic featherweight. On the flipside, however, Cucciniello has to know that the odds are stacked against him so he can just go out and fight his fight.

Cucciniello has good range and he's very good at putting together combinations on the feet. If he can stave off those takedown attempts and begin peppering away at Diamond with a complete striking game - that means leg kicks, body shots and going to the head - then he could begin to dismantle the Team Cormier standout.

Beyond the fight this week, it's also the last time these fighters will be together, as the season comes to an end. Cormier will host a team dinner at the house as he plans to say goodbye to the fighters who made up his team.

And then once the fight is finished, it will be time for the final face offs of the season as the lightweight and featherweight finalists will square off. That will then lead to the epic showdown between Miocic and Cormier, who will then meet in the main event at UFC 226 in arguably one of the biggest heavyweight title fights in the history of the sport.

Don't miss a minute of it as The Ultimate Fighter: Undefeated comes to a close tonight on FS1.