With only two episodes of The Ultimate Fighter: Undefeated still remaining, the last two semifinal fights are on deck.

Last week saw Brad Katona pull off an upset victory as he eliminated Bryce Mitchell to move on to the featherweight finals that will take place on July 6 in Las Vegas.

The latest episode will feature the other half of the lightweight semifinals, as Joe Giannetti from Team Cormier will take on Allan Zuniga from Team Miocic. The winner will then move on to the finale where they will face Team Miocic representative Mike Trizano, who already earned his spot on the card with a win over teammate John Gunther a few weeks ago.

For Giannetti, he will be returning to action after competing in the first fight of the season, when he made quick work of Team Miocic fighter John Gunther with a lightning quick first-round guillotine choke submission.
RELATED CONTENT: Recap last week | Meet tonight's fighters: Giannetti | Zuniga

Giannetti was actually one of light heavyweight champion Daniel Cormier's late picks, as he went fifth on his team after a pair of lightweights - Richie Smullen and Luis Pena - were selected ahead of him. As it turns out, injuries kept both of them from competing in the semifinals so that left Giannetti as the last man standing from Team Cormier to represent them in the finals on July 6.

At 6-feet tall, Giannetti is definitely one of the longer fighters in the competition. and with a nickname like "Skeletor" it's understandable that he will use that lanky body and huge range to his advantage in every fight.

Giannetti fights out of New England while occasionally cross training with fighters from Joe Lauzon's academy. Much like his first win in the competition, Giannetti is best known for his submission skills, where he's wrapped up finishes in five of his professional wins. As scary as Giannetti might be on the ground, he's worked tirelessly to improve his striking and he feels like Cormier has helped to transform him during the six weeks they've spent together on the show.

Putting together the complete package between his striking and ground work makes Giannetti a very dangerous matchup for anybody and he feels like his ability to hit and not get hit in return will pay huge dividends in this fight.

"If he can't touch me, he can't beat me," Giannetti said about his upcoming fight against Zuniga.

As for Zuniga, the Costa Rica native didn't get to compete in his opening round matchup after Irish lightweight Richie Smullen was knocked out of the tournament after he developed serious leg cramps that kept him from fighting.

While Smullen was obviously heartbroken over not being allowed to compete, Zuniga seemed just as genuinely upset because he was anxious to prove he belonged amongst the best fighters in the house by actually stepping into the Octagon rather than just getting a pass to the next round. In fact, Zuniga was rather emotional because he wanted to fight so bad 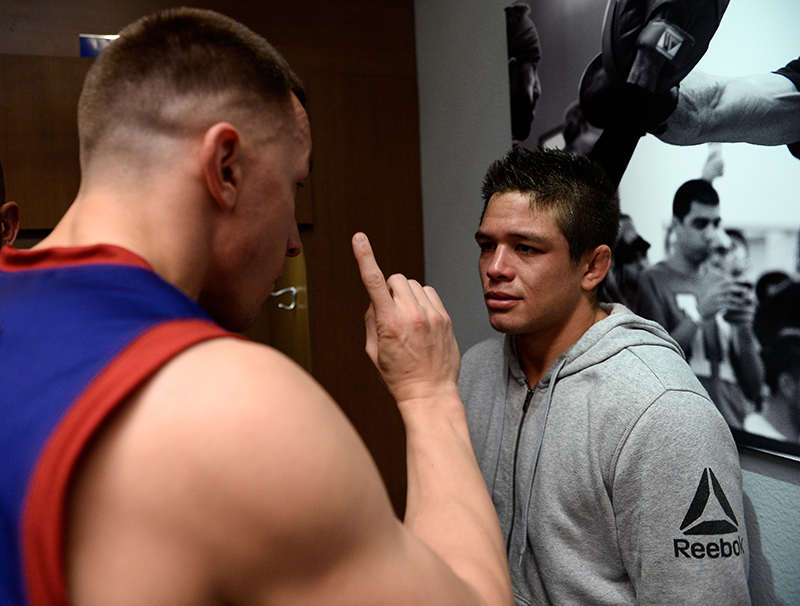 but didn't get the chance.

As disappointing as that may have been, Zuniga definitely has the advantage of not going through the rigors of a past fight, which means he will be completely healthy for this semifinal matchup against Gianetti.

Before the fight unfolds this week, Miocic and Cormier will also get the chance to square off in the yearly coach's challenge.

UFC President Dana White has often said that the coach's challenge is his favorite part of every season of The Ultimate Fighter and he definitely seems to have fun picking the most random competitions to test out the coaches.

This time, it will be Miocic and Cormier squaring off in a hockey shootout, which will be interesting to say the least.

Growing up in Ohio, Miocic was a well-known baseball player and wrestler before attending Cleveland State University, where he participated in both sports. Miocic even showed off his power on the baseball field after winning the UFC heavyweight title and then cranking a homerun on the first pitch thrown to him when he did batting practice with the Cleveland Indians. Meanwhile, Cormier is a two-time Olympic wrestler who has spent the majority of his life on the mats while competing against the best of the best from around the globe.

If there's a common theme between Miocic and Cormier's athletic accomplishments it's that neither one of them did anything on the ice, which should make this hockey showdown equal parts compelling and hilarious.

With $10,000 on the line for the coaches plus $1,500 going to the fighters from the winning side, Miocic and Cormier will both be gunning for the win.

Once the coach's challenge is wrapped up, the attention will turn towards the second lightweight semifinal between Giannetti and Zuniga.

On paper, this looks like the classic grappler versus striker fight with Giannetti being a ground wizard while Zuniga is best known for his kickboxing.

The key for Zuniga will be landing his strikes without allowing Giannetti to get inside for a takedown. The last place Zuniga wants to be in this fight is stuck on his back with a world-class grappler like Giannetti on top of him fishing for submissions. Giannetti is a nasty finisher and he won't hesitate to put this one away early if Zuniga gives him the opening.

As for Giannetti, while he's best known for his grappling, he can also use his range and length to give Zuniga problems from the outside. The key for Giannetti will be not falling too in love with his striking and forgetting about his greatest strength on the ground to wrap this fight up quick and then move on to the finale.

It will be interesting to see how this matchup plays out to determine the lightweight finalist who will then move on to face Mike Trizano on July 6.

Don't miss a minute of the action on the penultimate episode of The Ultimate Fighter: Undefeated tonight at 10 pm ET on FS1.