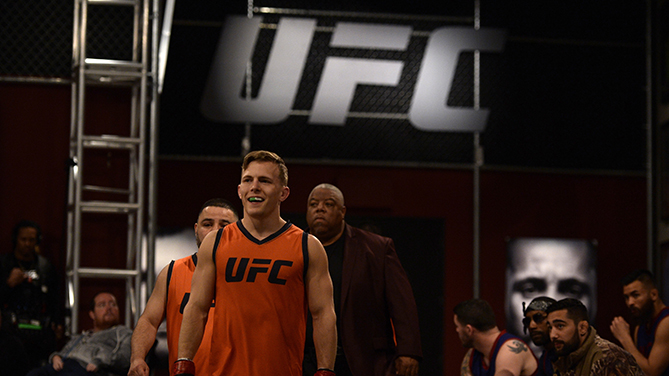 It was a tough week for light heavyweight champion Daniel Cormier, as he had to witness two of his fighters squaring off, with only one of them earning a spot in the live finale on July 6 in Las Vegas.

For Mitchell, it was a chance to realize his promise, as he had been one of the more highly touted fighters on the show this season. With a perfect 9-0 record and eight of those wins coming by way of submission, Mitchell definitely had a target on his back coming into the house, but he lived up to his reputation with a strong showing in his quarterfinal round matchup.

As for Katona, the soft-spoken Canadian who now resides in Dublin, Ireland, he was definitely one of the biggest underdogs and lesser known fighters when the show started. That all changed when he earned a victory in his debut performance against Team Miocic fighter Kyler Phillips, but he was undoubtedly the underdog once again going into his fight this week.

Still, Katona wasn't going to be deterred and he had no problem being counted out as he stepped into the Octagon to do battle with Mitchell in the latest semifinal matchup.

ROUND 1
Mitchell is stalking early after taking the center of the Octagon, but Katona isn't backing away. Mitchell definitely has a size advantage in this fight. Katona struggles to find his range early but he catches a kick from Mitchell and gets a nice single leg takedown to get the fight down on the mat. Katona patiently begins advancing his position while Mitchell plays defense from the bottom and attempts to get a reversal. Katona sees an opening for a guillotine choke and he goes for it, falling to his back, but Mitchell is quick to counter and he slips free before getting on top. Now it's Mitchell looking to advance but he moves too quickly and doesn't set his position, so Katona is able to use his butterfly guard to lift him and reverse things once again. Katona stays in control on top, trying to advance into half guard with Mitchell throwing strikes from the bottom. Mitchell is able to use his length to work his way back to the feet but Katona stays locked to him with the clinch. The fighters finally separate back to the center with Katona a bit more active, but Mitchell is using his reach to land the better strikes. Katona throws a low kick that gets caught and Mitchell works tirelessly until he finally drags him to the ground as time expires on the round.

ROUND 2
Mitchell comes out firing with a big looping punch followed by a huge head kick. Katona stays out of trouble but Mitchell is definitely more aggressive this round. Katona counters with a couple stinging inside leg kicks that crack Mitchell hard. The fighters get locked into the clinch with Katona eventually pressing the action against the cage and then Mitchell reversing positions with his double underhooks. The fighters are battling for position in a back and forth exchange on the fence but they eventually break free before resetting in the center. Mitchell is still the aggressor but Katona is starting to find a home for some of his counter shots. Mitchell slams home a perfectly timed counter left hand that hits its mark but Katona is still returning firer, undeterred from the punch. Katona is ducking his head and then diving in for punches, but Mitchell hasn't made him pay for it yet. Mitchell finally swoops in for another single leg takedown with just about a minute to go in the round as he begins working from the top position. Katona is very active from his back, swiveling his hips and looking for an armbar from one side and then switching positions and going for the other arm. Katona can't get the submission and Mitchell finishes the round on top. 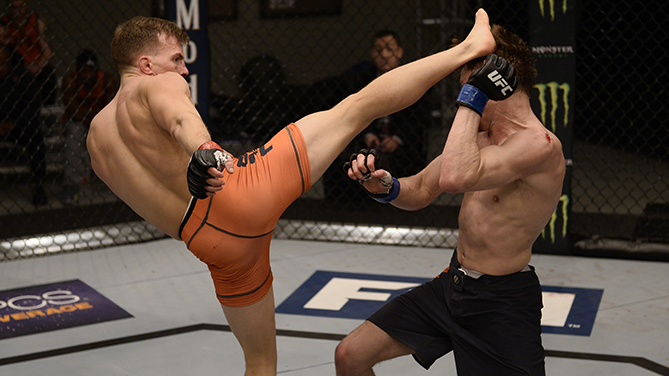 ROUND 3
Mitchell takes the center again after his coaches told him to look for the takedown between rounds. Mitchell seems content to strike as he continues to leap forward with punches while Katona keeps looking for the counter shots. Mitchell looks for a takedown against the cage but Katona is quick to grab on to a guillotine choke on the way down. Mitchell tries to fight his way out of position as Katona tries to hold on to the choke but he's forced to relent. Mitchell begins working from the top with short punches and elbows while Katona is constantly working his hips to look for a submission from the bottom. Katona finally sees an opening and he quickly grabs on to Mitchell's arm from the bottom as he looks to extend his legs to lock up the submission. Katona continues to torque the arm and Mitchell is forced to roll out of the submission, which allows his Team Cormier training partner to take the top position after letting go of the arm. Katona is very busy on top trying to advance inside Mitchell's guard. Mitchell briefly looks for a kimura but Katona is relentless with his pressure before taking the back in a scramble. Katona is lightning fast to lock on a rear naked choke and Mitchell's face turns to a grimace. A moment later, he's forced to tap out. 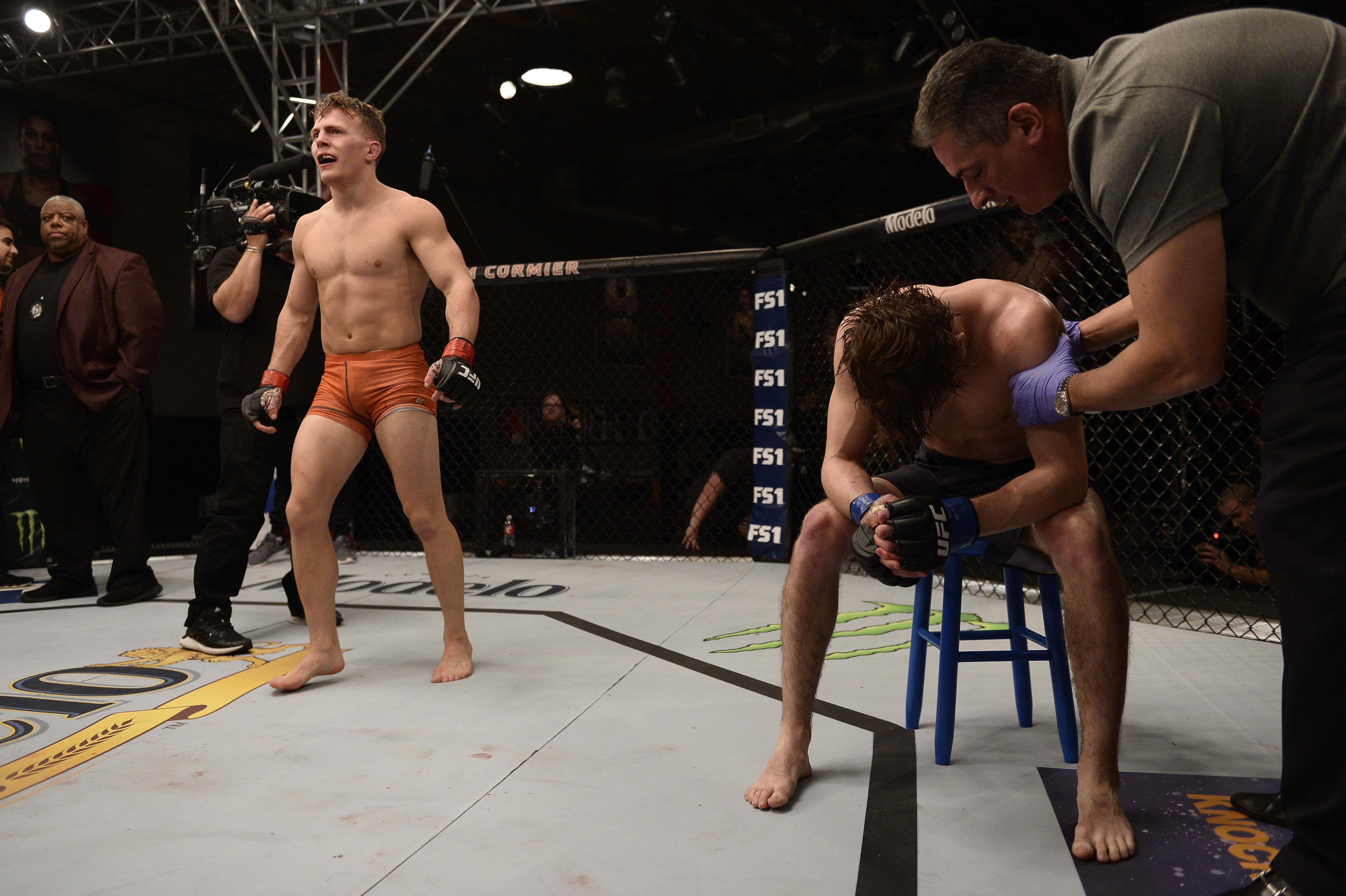 "There was a lot of work going on in that fight," Katona said about his win. "I have to give a lot of acknowledgment to Bryce for exposing areas of my game that I need to work on. He really tested me in all facets of fighting, on the feet, and in wrestling. I ended up coming out with the win, and I was saying before this fight how it is the intangibles, and I think I showed it in this fight."

With the win, Katona is now the first featherweight finalist, and he'll wait to find out his opponent.

Next week, the attention shifts back to the lightweight division, where Team Miocic fighter Allan Zuniga will finally get the chance to compete as he takes on submission specialist Joe Giannetti from Team Cormier.

Who will face Mike Trizano in the finals on July 6? Tune in to next week's episode to find out.