Last week’s episode of The Ultimate Fighter: Undefeated saw a pair of Team Miocic fighters square off, with Mike Trizano ultimately besting John Gunther to punch his ticket as the first finalist of the season from the lightweight division.

While it was definitely no easy task for heavyweight champion Stipe Miocic to watch two of his fighters square off, he gets to pass that baton over to light heavyweight champ Daniel Cormier this week, as “DC” will now witness the dreaded teammate versus teammate showdown in the featherweight division.

Highly touted prospect Bryce "Thug Nasty" Mitchell will look to guarantee his appearance at the live finale on July 6 in Las Vegas when he meets Canadian — by way of Ireland — Brad Katona, who has been one of the brightest surprises thus far during the season.

It's never an easy situation for teammate to fight teammate, especially when only one of them can go on to the finale and compete for a six-figure UFC contract.

To help offer Mitchell and Katona some advice, as well as impart some knowledge for the rest of his team, Cormier will bring in a guest coach to speak to his fighters, as former Ultimate Fighter winner Michael Chiesa joins the show this week.

Chiesa is preparing for his own fight a day after the Ultimate Fighter Finale when he faces former lightweight champion Anthony Pettis at UFC 226. Of course, long before he was a top 15-ranked lightweight, Chiesa was a competitor on the reality show during the only season when every episode aired live from week to week.

Chiesa spent 13 weeks in the house but perhaps he faced an even tougher test than his fights when he found out that his father passed away just a day after he earned his way into the house. Chiesa then had to move on to win three more fights before then facing teammate Al Iaquinta in the live finale just after the show finished filming.

It was an arduous journey, to be sure, but there's no doubt that Chiesa will have plenty of knowledge to pass along to the fighters still remaining in the competition as well as the athletes who are looking to make it to the UFC after the show is finished.

As far as the fight preparation goes this week, Cormier takes a different approach than Miocic in large part thanks to a decision made by his fighters.

While Miocic bowed out of coaching either one of his fighters a week ago, Cormier will stick around to help both of his athletes to get ready while then taking a step back when it comes to cornering either one of them.
RELATED CONTENT: Recap last week | Meet tonight's fighters - Mitchell | Katona

Cormier has built a tight bond with his fighters this season and it's undeniable that he's helped turn eight undefeated prospects into a true team over just a few weeks’ time. Now he has to try and keep that bond together while preparing for two of his top fighters to face off inside the Octagon.

Mitchell will definitely walk into the fight as the favorite thanks in large part to his reputation as a devastating finisher after putting away eight of the nine opponents he faced during his pro career. While Mitchell did end up going to a decision in his quarterfinal round matchup against Team Miocic fighter Jay Cucciniello, he still showcased a dominant game plan that helped him put together a strong performance over two rounds.

Throughout his career, Mitchell has shown a very strong ground game, which is how he's managed to pull off submissions in every single one of his victories. Mitchell is no one trick pony either, because he's wrapped up several rear naked chokes as well armbars and triangle chokes from the bottom. Mitchell is dangerous everywhere, but he's especially tough on top, where he will enjoy a big size advantage over his opponent this week.

Mitchell stands 5-foot-9-inches tall, which will give him a solid three inches towering over Katona, who will definitely have to make up for that size gap during the fight. 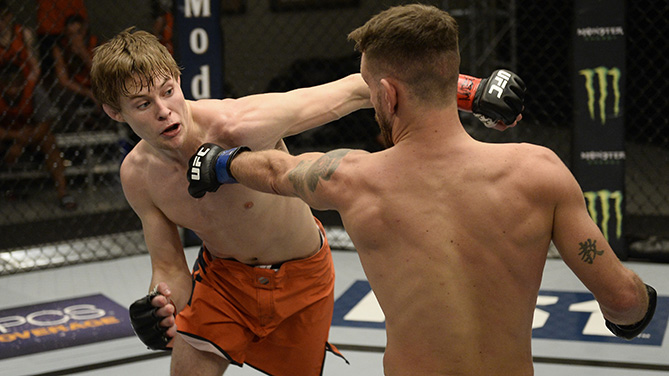 While Mitchell might be the favorite, don't discount Katona's ability to pull off the upset.

The 26-year old Canadian, who now calls Dublin, Ireland home, proved in his opening round matchup that he's more than happy to play spoiler against anyone and everyone he faces. Katona had to gut out a majority decision against Team Miocic fighter Kyler Phillips in his opening round matchup, and there's little doubt that he'll have to pull out all the stops to get the job done this week as well.

That being said, Katona is a very versatile fighter with a very slick ground game of his own, so he might invite some scrambles on the mat if Mitchell decides to employ his grappling. Katona has pulled off several submissions of his own and he works with noted Brazilian jiu-jitsu black belt and head coach John Kavanagh at home in Ireland. On the feet, Katona may be giving up some size, but he's quick with his hands and a very good counterstriker.

If Katona can catch Mitchell coming forward, he may be able to turn the tables on him in a hurry if they begin exchanging strikes on the feet. While this matchup might seem like a lock to hit the ground, don't discount Mitchell and Katona respecting each other’s grappling skills so much that they decide to stay on the feet.

Who will get the job done and move on to the finals in the featherweight division for The Ultimate Fighter: Undefeated? Tune in tonight at 10 pm ET on FS1 to find out when Bryce Mitchell clashes with Brad Katona.