There have been a lot of unique concepts to create the teams over the course of 27 seasons of The Ultimate Fighter.
There have been two seasons that helped determine champions as the women's strawweight and women's flyweight divisions kicked off by way of The Ultimate Fighter. There was a season not that long ago that sought to find a worthy challenger to take on flyweight champion Demetrious Johnson. There have been two separate seasons that featured former athletes from the UFC or The Ultimate Fighter who were vying for a second chance to compete inside the Octagon.
This time around, The Ultimate Fighter is putting together 16 of the top prospects from around the world in the lightweight and featherweight divisions to compete for that coveted six-figure UFC contract, but there's something special about this particular group of athletes in that every fighter on the show this season is undefeated.
Now, of course, not all records are created the same, so there are fighters joining the show this season with unblemished records without as much experience as some of the other athletes on the show. There are fighters who come from famous camps while others are training out of gyms that aren't household names in mixed martial arts.
The goal is still the same for everybody, however, as these 16 fighters all want to get their shot to join the UFC, and by the time this season is over, only two fighters will still know they are truly undefeated.
To help them along the way, the UFC provided these fighters with the best possible coaches, as heavyweight champion Stipe Miocic and light heavyweight champion Daniel Cormier will work with these featherweights and lightweights to get them ready for the battle ahead.
Interestingly enough, Miocic has never been involved with The Ultimate Fighter previously, either as coach or competitor. In fact, Miocic probably wouldn't call himself a coach outside of this situation, as he's played the student more than the teacher throughout his run to become the longest reigning heavyweight champion in UFC history.
Thankfully, Miocic has been taught by some of the best coaches throughout his career and now he's anxious to pass along that knowledge to the fighters looking to find success on the show.
To help him with the fighters, Miocic brought in a couple of very familiar faces, as former UFC fighter Chris Camozzi and current lightweight competitor James Krause serve as assistant coaches for the heavyweight champ. Camozzi actually earned his way onto The Ultimate Fighter season 11, but suffered a broken jaw in the fights to get into the house so he wasn't able to stay in the competition. 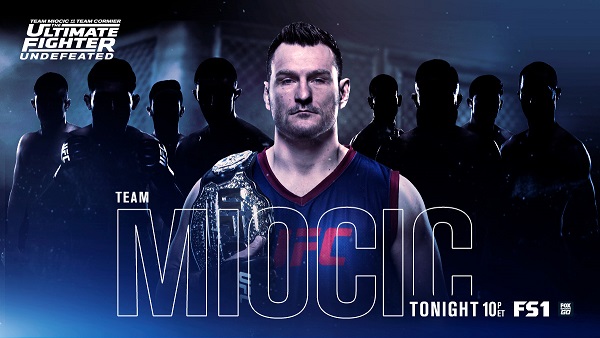 As for Krause, he actually had two separate stints on the reality show. The first time around, Krause was eliminated in the fights to join the house and he returned during the recent Redemption season, where he made it all the way to the semifinals before he was eliminated. Now Krause will look to help Miocic lead his team to victory this season.
While Miocic is a relative novice when it comes to coaching, Cormier sits on the opposite end of that spectrum, as he's been helping lead his team at American Kickboxing Academy since the first day he decided to fight.
Prior to his UFC career, Cormier was a two-time Olympic wrestler and he grew up under legendary coach John Smith at Oklahoma State, so he learned from the very best before he ever decided to become a fighter.
Since joining the UFC, Cormier has continued to act as wrestling coach and part time assistant coach at the San Jose-based gym, where he helps a laundry list of top fighters prepare for upcoming bouts, including new lightweight champion Khabib Nurmagomedov, as well as his close friend and longtime teammate former middleweight champion Luke Rockhold. Cormier even coaches a kids' wrestling team, so it's ingrained in him to help athletes get ready for whatever competition stands in front of them.
So as the competition kicks off in the first episode, Cormier might seem to be at a slight advantage as he joins Miocic in the time honored art of putting the fighters through some drills so that the coaches can judge them ahead of team selections and the first fight being announced.
There have been numerous approaches to these skill tests, with some coaches looking at conditioning as a key factor in picking a team and others just attempting to drill their fighters in sparring sessions to see what they're dealing with ahead of the fights.
It's up to Miocic and Cormier to decide how they want to push these fighters to judge them ahead of the team selections, but once that short amount of work is done, it will be time to make their picks and get this competition underway.
Once the team selections are done this week, the first fight will be announced immediately, as Miocic and Corimer shift into coaching mode to get their athletes ready.
It will be an interesting dynamic all season long to see how the fighters deal with each other, considering all of them are stepping into this competition without a single loss on their record.
Featherweight fighter Dulani Perry makes an interesting observation during the first episode that's worth exploring as the season pushes forward. He mentions how everybody is undefeated so that makes it that much harder for fighters to try and pick at each other before the season really gets underway. Perry predicts that will change dramatically once the fights kick off and the cream rises to the top, which he believes will undoubtedly lead to some conflict between the fighters in the house.
Is Perry right?
Will tensions stay simmering until after the competition begins or will these fighters already be jockeying for position as the top dog before the first punch is thrown?
Tune in to the first episode of The Ultimate Fighter: Undefeated tonight at 10pm ET on FS1 to see how it all unfolds.