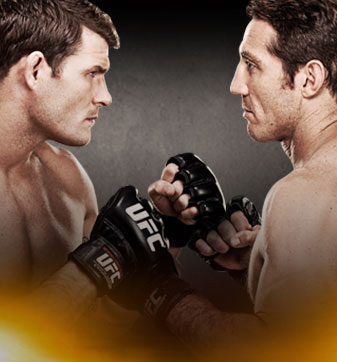 If Michael Bisping is involved in a fight, there's a fair chance it's a fierce rivalry or a grudge match, and such is the case in his TUF Nations Finale main event bout against Tim Kennedy in Canada.

Bisping is returning to action after a year off dealing with an eye injury, but now back to full health, he's looking to use Kennedy as his stepping stone back into the deep end of the middleweight division while picking up another win over a top 10 opponent.

In addition to Bisping and Kennedy, the TUF Nations Finale will feature a battle of coaches when Team Canada's Patrick Cote takes on Team Australia's Kyle Noke.  The TUF Nations finals also go down, with a whole lot of Canadian on Canadian crime taking place as Chad Laprise faces Olivier Aubin-Mercier and Elias Theodorou takes on Sheldon Westcott.

In today's fantasy preview for the TUF Nations Finale card we're going to preview the main card and break down some key elements for victory or defeat and who has the best chance of coming out on top.

These two middleweights just do not like each other, so that virtually guarantees a lot of jawing before the fight and a whole lot of punching once the Octagon door closes. Fighters like to hate on Michael Bisping, but the fact is that he's ranked No. 5 in the world for a reason.  He's a volume striker, landing 4.62 significant blows per minute while displaying great defense, blocking over 70 percent of his opponent's punches and kicks.

Kennedy's accuracy is actually better than Bisping's, as he lands at 50.44 percent, but his best chance to win this fight is probably on the ground.  Kennedy is an underrated grappler who constantly fishes for submission and averages just over two and a half takedowns per fight.  While his stand-up is more than adequate, the ground is the one place where he has a real advantage over the Bisping.

The problem is, most fighters can't take Bisping down, and the ones that do struggle to keep him there.  Bisping shrugged off Chael Sonnen's takedown attempts, and he's one of the best wrestlers in the middleweight division.  On paper, Bisping's takedown defense is a shade under 64 percent, but numbers don't tell the whole story.  Bisping's footwork and quickness usually keep him out of the range of his opponents shooting in on him, and as he peppers away from the outside, rarely can anyone hang with him for an entire fight.  This one is scheduled for five rounds and Kennedy actually has the advantage there, having been in a couple of title fights before now, but still, once the final horn sounds after the 25th minute, Bisping should be able to pull away on the scorecards and get the victory.

The battle of the TUF Nations coaches is an intriguing matchup in the welterweight division.  Both fighters are coming off extremely long layoffs (Cote over a year, Noke is approaching 19 months away), but now they are primed and ready for war.  The other interesting factor in this one is the fact that Cote and Noke return for their second welterweight fight each.  Both won in their debut at 170 pounds, but which one stays undefeated in their new weight class?

Both fighters enjoy a good striking battle, but Cote is well-known for his knockout power and tremendous chin.  The only problem is that we haven't seen enough of him at welterweight to know if the same strength he had at middleweight has translated over to the smaller weight class. His cardio suffered a bit in his debut as well, but Cote promised he's addressed that issue since then.

On the other side, Kyle Noke has been a machine for most of his career.  An equally dangerous fighter on the ground or on the feet, he will have a size advantage in this one because he's a massive fighter for 170 pounds and will also have three inches of reach over Cote.  One of the best attributes Noke has is his 57 percent striking accuracy while landing nearly three and a half strikes per minute.  When you mix that with a grappling game where he takes an opponent down almost three times per fight and has numerous submissions to his credit, Noke just has more ways to win this one.

Expect the Aussie to wear Cote out in the early part of the first and second rounds before going for the kill and locking on a fight-ending submission before the final horn sounds.  Noke is going to be an interesting prospect to watch at welterweight and this could be his re-introduction to the division.

The first of the all-Canadian finals from TUF Nations is in the middleweight division, as undefeated prospect Elias Theodorou takes on former teammate Sheldon Westcott.  On the show, these two could not have been more different in the way they earned their spots in the final.  Westcott was often injured and barely able to walk or bend his neck at one point, but he somehow pulled off two lightning fast finishes, while Theodorou was an early favorite and won both his fights in convincing fashion, but ground both of his Australian opponents to a decision.

Theodorou may not have the most exciting style in the world, but he's extremely effective in what he does.  Think about Jake Shields vs. Tyron Woodley from 2013 - not the dynamic, explosive fight you'll watch over and over again, but an effective wall and stall performance from Shields that earned him the win. Theodorou can do the same thing here by clinching and out wrestling Westcott for three rounds.

Westcott might be the more dangerous fighter when it comes to finishing ability, but it's Theodorou's stifling and suffocating clinch attacks that will eventually zap his power, and by the third round, he will be just begging for a way out of his opponent's grip.  Theodorou will have to improve if he's going to have longevity in the UFC, but for now he'll have the ground game, clinch work and smart strategy to get the win in the TUF Nations middleweight final.

It's a clash of styles in the other TUF Nations final, as heavy hitter Chad Laprise takes on wrestler and grappler Olivier Aubin-Mercier. Laprise gained a ton of notoriety this season when he shattered teammate Kajan Johnson's jaw in two places with one counterpunch. Meanwhile, Aubin-Mercier is a fighter who idolizes former welterweight champion Georges St-Pierre, and does everything in his power to emulate the Canadian legend.

Where this fight separates a bit is in Aubin-Mercier’s relative naivety when it comes to the standup game.  Aubin-Mercier is a high-level wrestler with lighting quick takedowns, but through four fights in his career and all the bouts he had on the reality show, no one was able to stuff his attempts to get the fight to the ground and this might be the time where he will struggle because Laprise is no slouch with his defense.  On the feet, the fight could almost be described as a mismatch.

Laprise is fast, hits hard, and is such a good counterstriker that even when Aubin-Mercier sees an opening to shoot for a takedown, he'll probably be eating a knee or an uppercut the moment he lowers his head.  Laprise just needs one good, solid shot to connect and the fight is over. Aubin-Mercier on the other hand has to get this fight to the ground and either hope he can lock up a rear naked choke submission (he has five of them in his career) or keep Laprise on his back for 15 minutes.

Chances are, however, Laprise will get his one shot and finish Mercier before the third round starts.