Recap from the eighth episode of The Ultimate Fighter: Canada vs. Australia 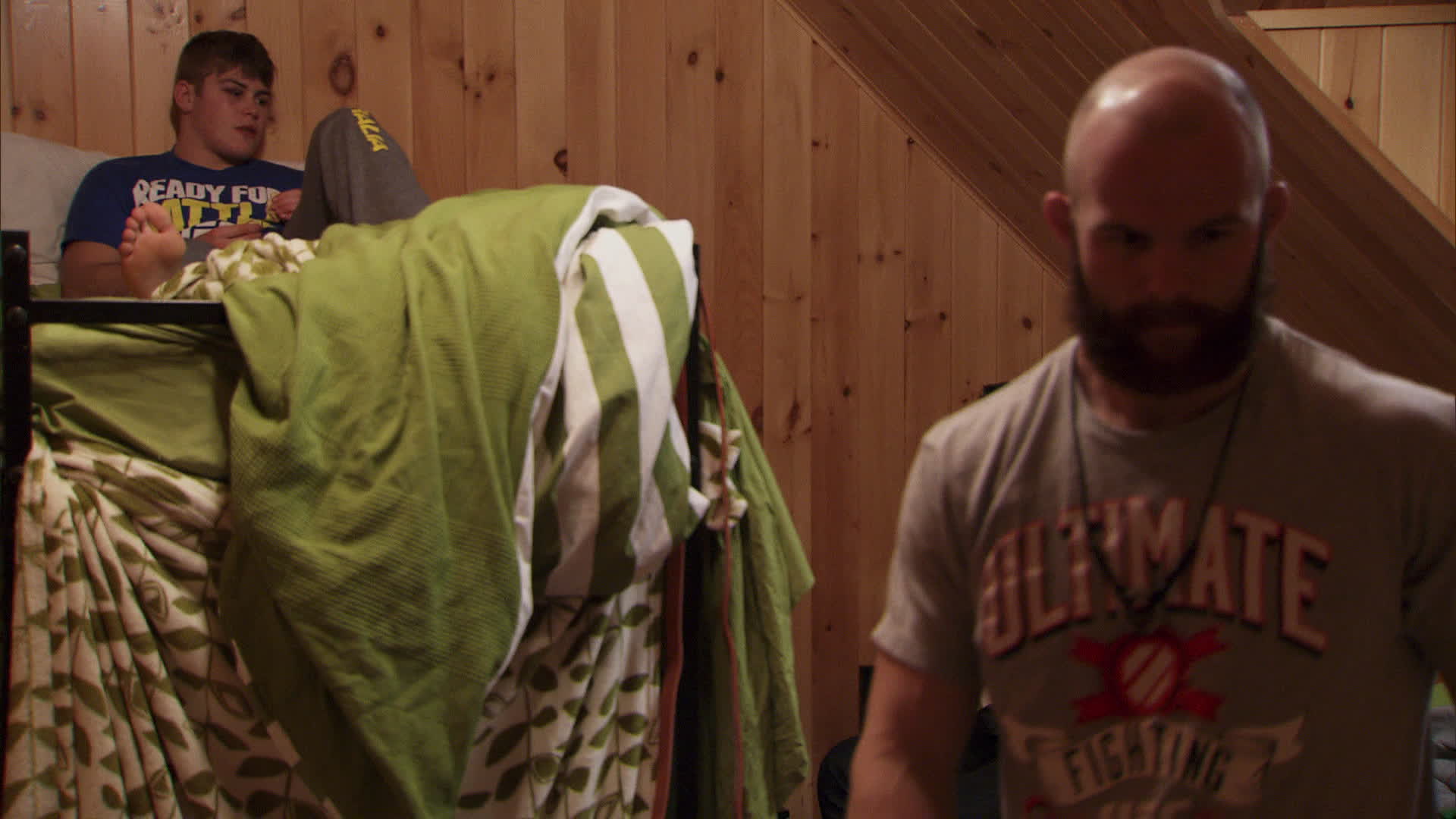 The episode opens at the house in the aftermath of the Olivier and Jake’s fights last week. As the victorious Olivier celebrates with poutine (how French Canadian of him) Jake is upstairs in his bed. He may be only 19 years old with a bright future ahead of him, but he’s taking the loss hard. His teammates come to cheer him up, but it doesn’t seem like their words are having much effect.

The focus then transitions to this week’s matchup between Team Australia’s Vik Grujic and Team Canada’s Luke Harris. Vik knows that he has the biggest fight of his life ahead of him, but his mind is back on his family at home. He has a wife and three daughters, and the time away has been very difficult. He realizes that his career choice has placed a great strain on the family, but he hopes that his run on The Ultimate Fighter will change things. He wants to give them a certain lifestyle, and he sees the UFC as his chance to make that come true.

We move to a Team Australia training session. After Coach Kyle Noke convinces Jake to stop feeling sorry for himself and get on the training mat, he has a special surprise for the team. A hooded figure walks in the doorway and it turns out to be light heavyweight champion Jon Jones. A teammate of Noke’s at the Jackson-Winkeljohn camp in Albuquerque, he was brought in to “light a fire” under the Australians. We’ll find out later if it works out, but Vik calls the champ’s appearance a “massive 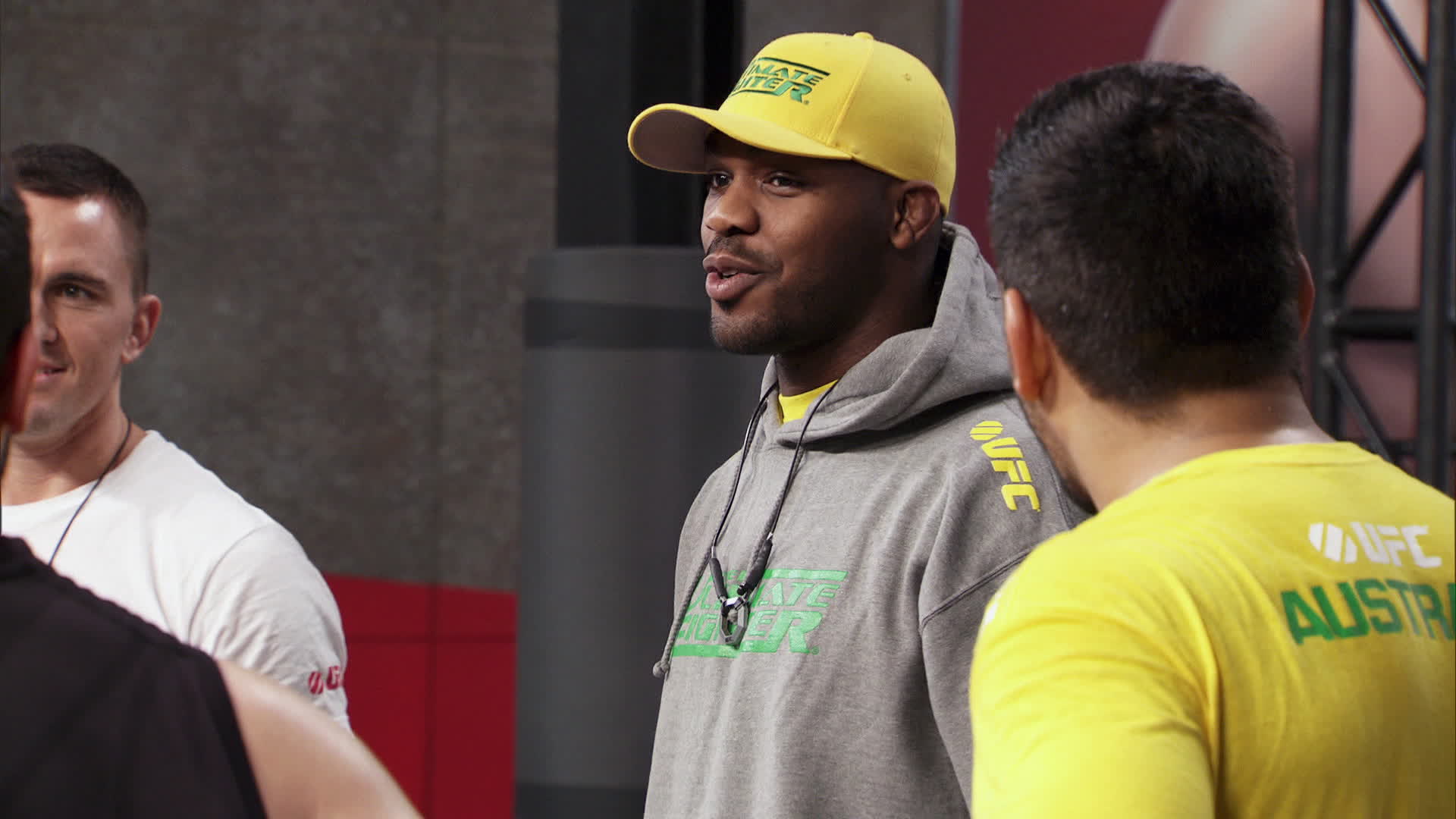 morale booster.” After showing some elbow techniques, Jones talks to the Aussies and tells them to keep their head up. Some of them may have been eliminated from the tournament, but they still have a chance to compete in the UFC.

Back on Team Canada, Sheldon Westcott has some more bad news. Besides a knee injury that has hampered him the entire season, he recently heard his neck pop while grappling with Patrick Cote. He’s been noticing some numbness in his hands and waits for the MRI results.

We then learn more about Luke Harris. A judo practitioner since the age of eight, Harris also holds a black belt in Brazilian Jiu Jitsu. A self-proclaimed “shy guy,” Luke was drawn to MMA because he enjoys the crowds. It brings him out of his element and allows him to break out of his shell. His coach Patrick Cote tells us that when Luke gets his hands on you, “you’ll go flying.” Cote is confident in Luke’s grappling ability, but he wonders about his standup skills. Conversely, Kyle Noke calls Vik’s wrestling the weakest part of his game. Looks like we’ll have a classic striker vs. grappler match.

Coach Cote has a lot more to worry about than Luke’s punch defense, though. With the inevitability of two teammates fighting each other, tensions are starting to heat up. Kajan and Chad continue their argument over who should get to fight Richard Walsh. Chad tries to explains that he wants Richard because they’ll have the fight of the season. Kajan is a bit more honest. He wants Richard because he’s, “the easiest fight.”

As the Canadians continue to bicker, Cote counters Noke’s Jon Jones appearance by bringing in former Strikeforce middleweight champion Cung Le in to teach. While Cung Le teaches spin kicks, we see Sheldon in a neck brace. He meets with the doctor who runs him through a battery of tests. The situation appears to have gotten better, but the physician won’t give a definite answer. Sheldon will have to wait another couple of days to find out if he’ll be allowed to fight in the next round. In the meantime, Sheldon tells Nordine (his possible replacement) that he better win the whole thing. After a few last minute preparations, it’s fight time!

Vik opens the round with a solid uppercut. He paces himself well, though, and isn’t rushing in wildly. Making sure he doesn’t tie up with Luke, Vik pops his jab and follows up with a hook. That second 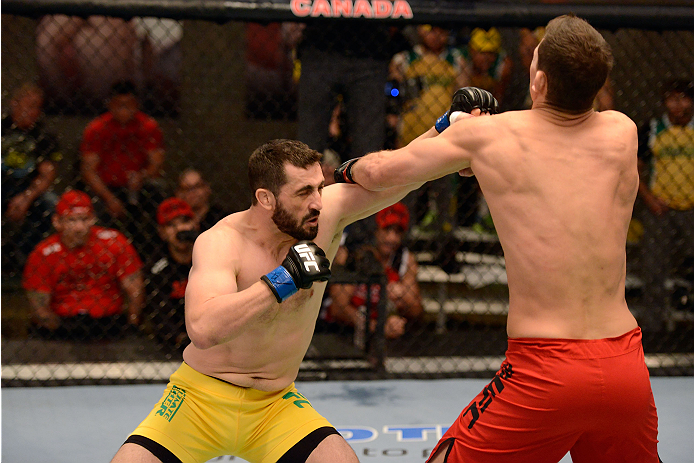 punch looks to daze Luke and Vik wastes no time turning it up. He grabs a waistlock, slams Luke to the ground and moves to side mount. He drops some vicious elbows and referee Yves Lavigne jumps in quickly to call things off. Only 50 seconds into the fight, Vik Grujic brings the Australians back into the win column by first round TKO.

Overjoyed at his impressive victory, Vik explains how this win means some much more. He knows how much he owes his family for letting him pursue his dream, and the win brings him one step closer to making things even. Even Cung Le, who only gave Vik “a puncher’s chance” at winning, is impressed by the performance. As Luke makes his way to the back to get stitched up, he’s clearly disappointed at his performance. He feels like he let down his coaches, but also admits that he doesn’t know what’s next for him. At 36 years old, he may be in the same situation as Australia’s Dan Kelly. Perhaps it’s time for him to hang up the gloves.

On that somber note we get a snake peek into next week’s episode.

We end with a sneak peek into next week's episode. Does Team Canada implode? Who gets to fight Richard Walsh? Does Jake Matthews cheer himself up with Justin Bieber karaoke? Find out this and more on The Ultimate Fighter!