Recap from episode 7 of TUF Nations: Canada vs. Australia. 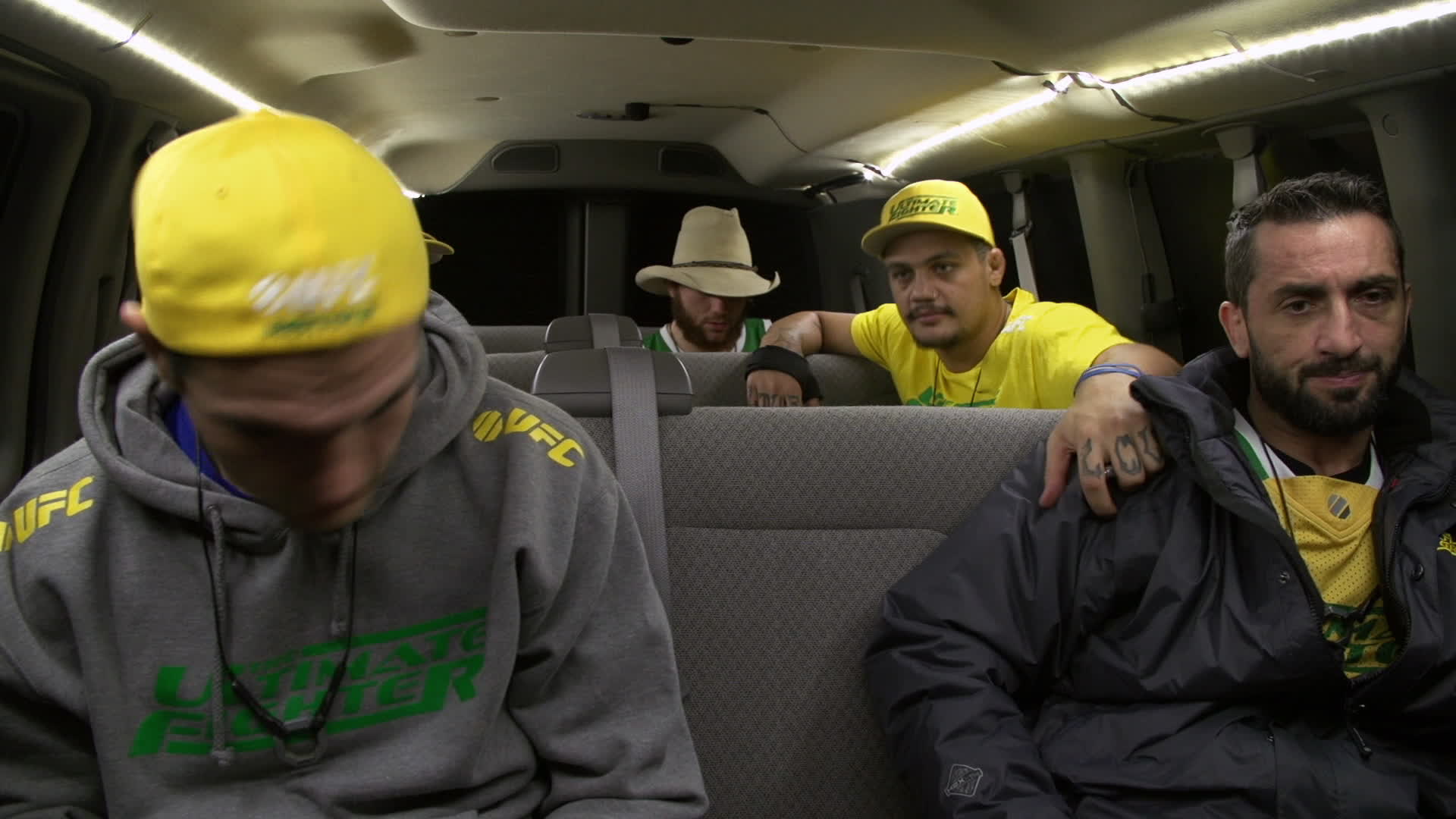 The episode opens up with the aftermath of last week’s fight between Dan Kelly and Sheldon Westcott. The Australians are still upset at how many of the members of Team Canada reacted to Sheldon’s victory, and feel they crossed a line. Vik Grujik is especially angry at Kajan Johnson and says that he won’t tolerate, “anybody disrespecting any of my boys.” Completely unaware of the fact that he’s now at the top of the Australian’s enemy list, Kajan remarks, “Hopefully the mood is still the same [in the house], and everyone gets along nicely.”

Once in the house, Vik confronts Kajan and tells him that he was out of line. Kajan doesn’t understand what’s the problem and incorporates Shaggy’s, “It Wasn’t Me,” defense. As Vik and Kajan continue their discussion, Dan Kelly returns home from the hospital. He’s scheduled for an MRI tomorrow and he’s not too eager to get the results. There may be no fracture in his knee, but he claims to have heard four pops during the fight and thinks his career may be finished.

The focus then shifts to Team Australia’s Jake Matthews and his matchup against Olivier Aubin-Mercier. Only 19 years old, Jake first started training in MMA as a way to stay in shape during the 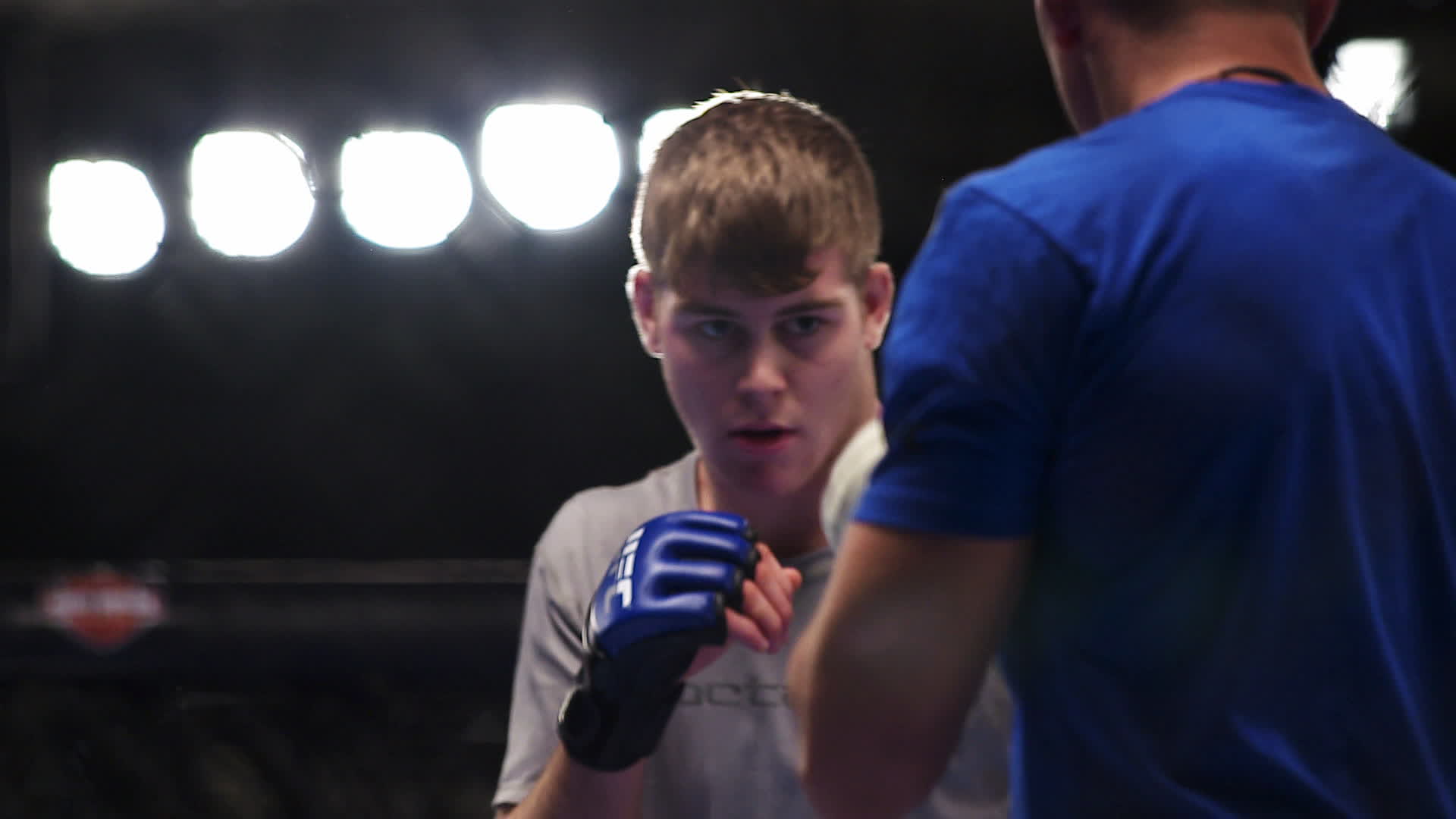 football offseason. After a strong amateur career, he competed for a regional title in his professional debut and won by second-round TKO. Jake feels that his greatest assets are his conditioning and athleticism. He’s worried about Olivier’s judo background, but feels that he can compete with him on the mat.

As Jake trains, the doctor comes in to give Dan Kelly the results. His cruciate ligament is ok, but he does have an issue with his meniscus. They’ll need a bit more time to see the full extent of the injury, but he should be fine in 4-6 weeks. He shares the news with his teammates and everyone is excited. Everyone, that is, except Dan. It’s better news that what he had braced himself for, but he’s still not pleased about having to sit out a couple months.

We cut to Team Canada’s training session and the tenseness seems to be ratcheting up every week. Sheldon comments about how the “atmosphere has changed,” and that the fighters that are still in the 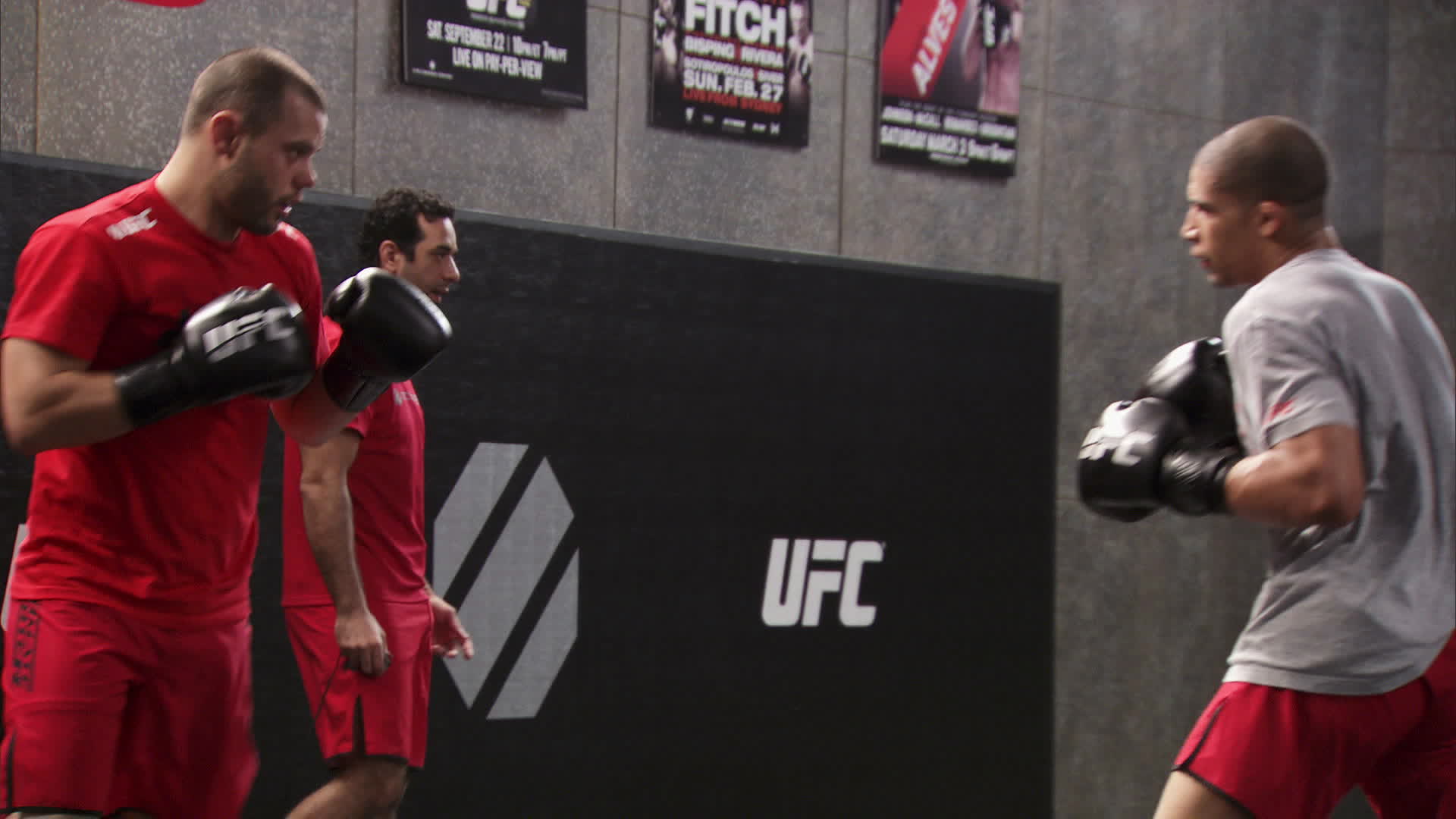 tournament are eyeing each other as potential opponents. Kajan has noticed the same thing and comment on how the sparring between Chad and him has become much more intense. He also says that he’d much rather fight Chad than Olivier. A former judo practitioner, the undefeated French Canadian has impressed his coach. Patrick Cote marvels at his explosiveness and Olivier’s ability to always give 100% in training. Also confident in his ability to fight anywhere, Olivier believes that he’ll hurt Jake on the feet and then finish the fight by submission.

After some Xbox One gaming and a Brendan O’Reilly “nudie run”, we make it to weigh-ins. There’s no real drama, but we do learn that Jake Matthews and Justin Bieber looks surprisingly similar. No matter how the fight ends, I’m sure that will help Jake with the ladies back home. We see some of the last minute preparations and then it’s fight time!

Jake strikes first with his hands. He opens with a quick flurry, but only grazes Olivier. He keeps the 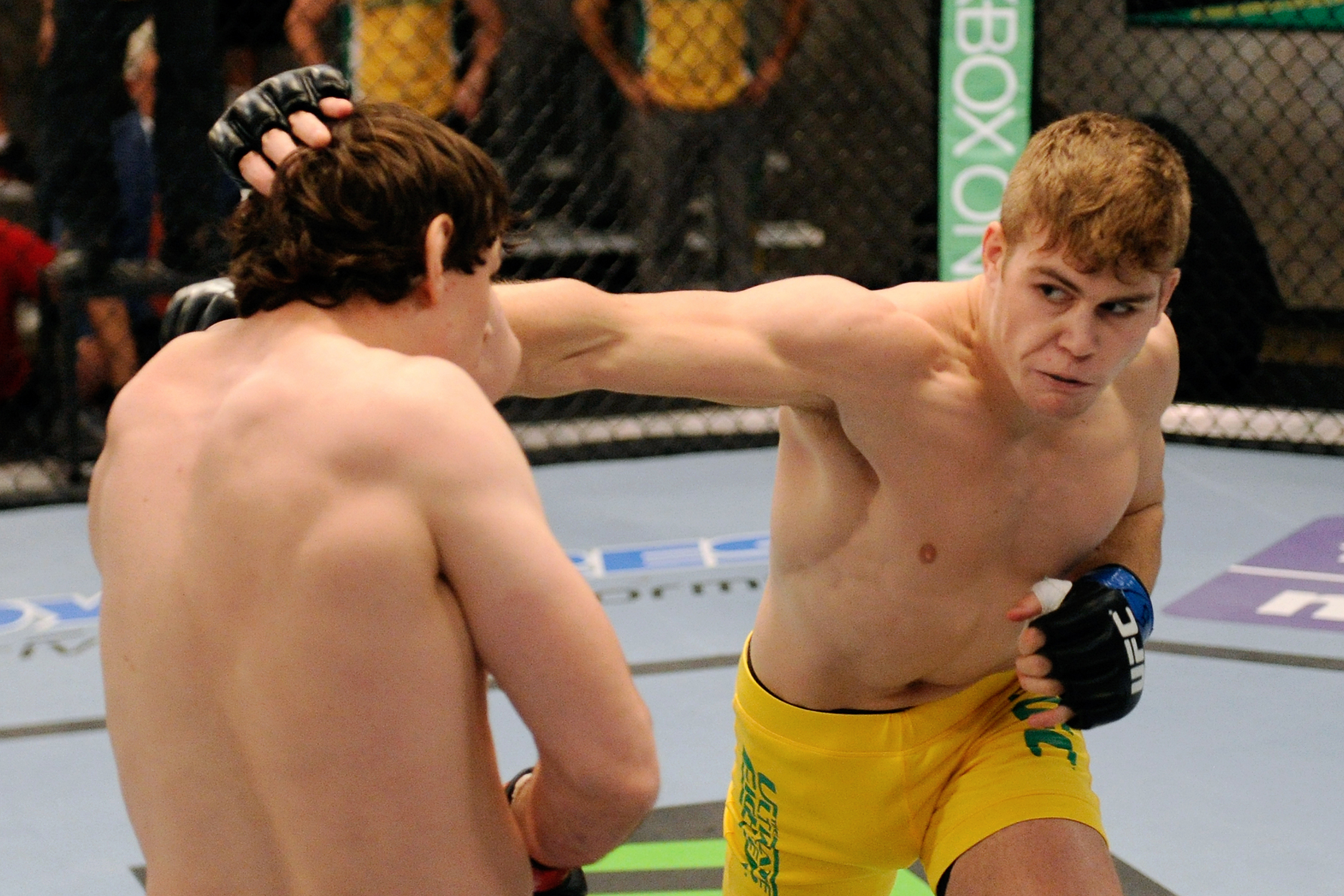 pressure and lands a solid power shot. Olivier tries to work his jab, but Jake continues to back him down and lands a big body kick. Jake continues to be more active and Olivier is surprisingly tentative. The Canadian finally rushes in and the two are clinching against the fence. Olivier scores a couple knees and then breaks the hold. Olivier connects with a body kick of his own and charges forward. Jake tries to counter with a knee, but Olivier grabs his leg and brings him to the ground. Jake creates some angles for a triangle attempt, but Olivier smothers him. Olivier then stacks Jake and starts bringing the punishment. As Olivier’s punches get through Jake’s guard, the Australian reaches for a leg lock, but nothing comes of it. Jake makes it to his feet briefly, but appears to pull guard and winds up eating some more punches as time expires.

Between rounds, Kyle Noke tells Jake to stop clinching and trust his standup. He tells him that he may have lost the round so he needs to come out strong. 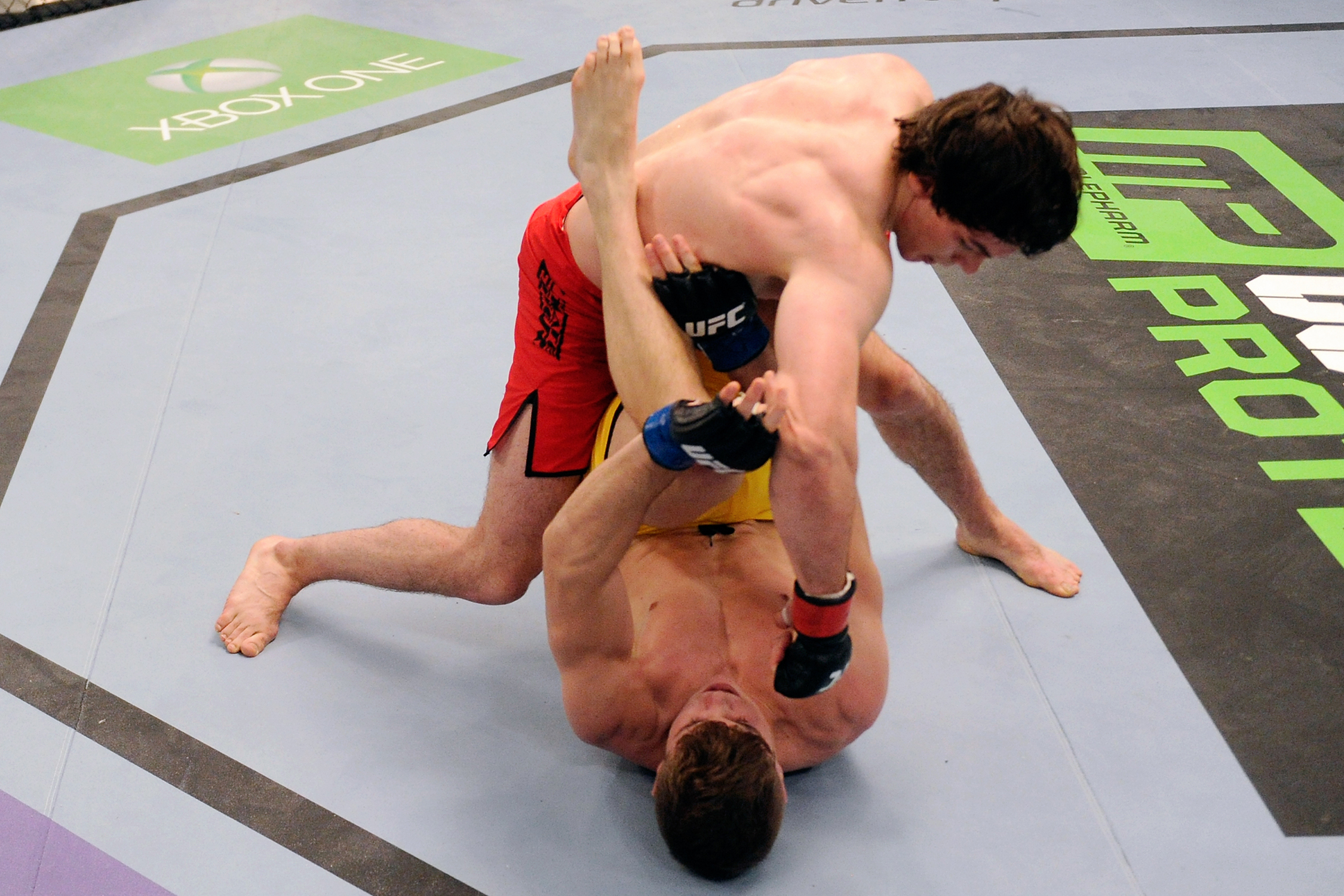 The round opens with Jake landing a jab, cross combo and Olivier countering with a kick. Jake grabs the leg and runs in for a single leg takedown. The two are against the cage and Olivier reaches for a kimura and then transitions to a takedown of his own. He continues his ground and pound from the first round and Jake just can’t find a way to get out from under him. The attacks from top position give Olivier the opening to pass guard and move to back mount. He works in the body triangle and Jake is completely stuck. The tough young Australian works his way out of multiple rear naked choke attempts, but he can’t seem to shake Olivier off. He spends the rest of the round just trying to survive. He can’t get away and spends the rest of the round trapped in back mount.

The scorecards come back and Olivier takes the unanimous decision. Coach Noke is disappointed that Jake didn’t trust his hands and keep the fight on the feet. Jake admits that he made a tactical error and didn’t follow the plan. We move to the fight announcement and it will be the last middleweight preliminary of the season as

Canadian veteran Luke Harris takes on life-long martial artist Vik Grujik. The episode wraps up with a sneak preview of next week’s episode. Will Team Canada close out the first round with three straight wins? Can Vik Grujik get the Australians back into the win column? Does the winner of next week’s fight have to keep Justin Bieber? Find out this and more next week on The Ultimate Fighter!