Recap from episode 6 of TUF Nations: Canada vs. Australia. 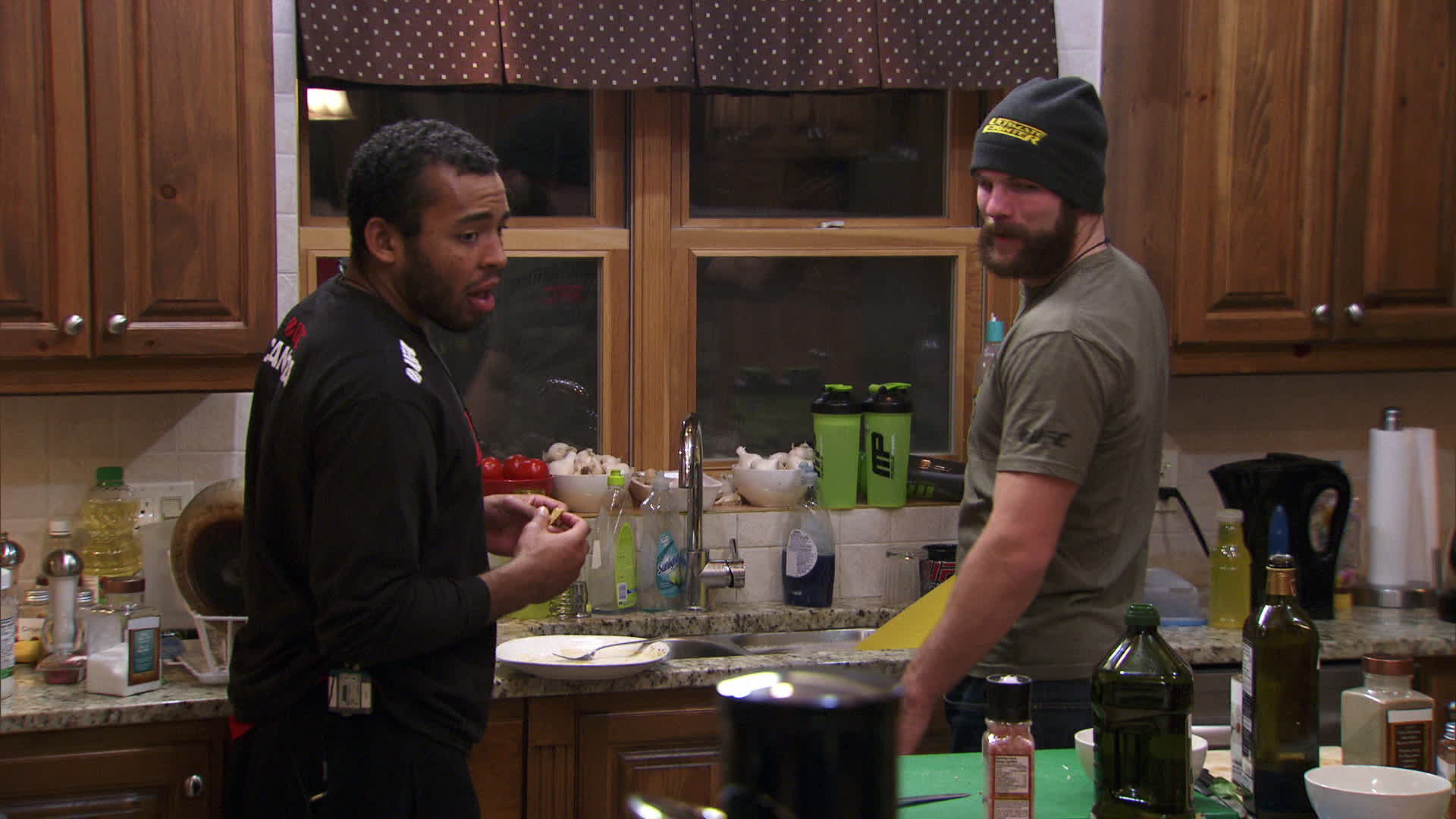 The episode opens up with Richard Walsh and Matt DesRoches talking about their fight from last week. Matt calls it an honor to get in the Octagon with a guy like Richard and Walsh is similarly complimentary of his Canadian counterpart. The international diplomacy gets interrupted by loud noises outside. Is Elias having a hair crisis? Nope, just a couple Australians running naked in the snow. One person was still wearing their team baseball cap, though. I assume it was for national pride.

Chad Laprise has no real interest in nude running. Instead, he’s plotting his semi-final fight. He’s singled out Richard Walsh and even clipped a handwritten contract to the refrigerator. Rich is amused, but a fight with Chad doesn’t appeal to him. He’d much rather fight Kajan Johnson instead. Kajan loves the idea and calls it “the best case scenario.” Afraid that his plan might fall through, Chad then embraces the classic political smear campaign. The only difference this time is that the target of the insults is himself. Kajan follows suit and the two begin telling the house about how unskilled they are at fighting. It’s the exact opposite of the usual MMA trash talk.

The focus then shifts to this week’s fight between Canada’s Sheldon Westcott and Team Australia’s Dan Kelly. As we saw last week, Sheldon has been having some problems with his right knee. He goes to the doctor’s office to have the knee checked out. Other than losing some leg hair, Sheldon’s visit goes smoothly and he’ll be cleared to fight. He goes to practice and does some work with assistant coach Fabio Holanda (we later learn that Patrick Cote is in Las Vegas for UFC 167). He just wants Sheldon to take it easy and not put any more stress on the 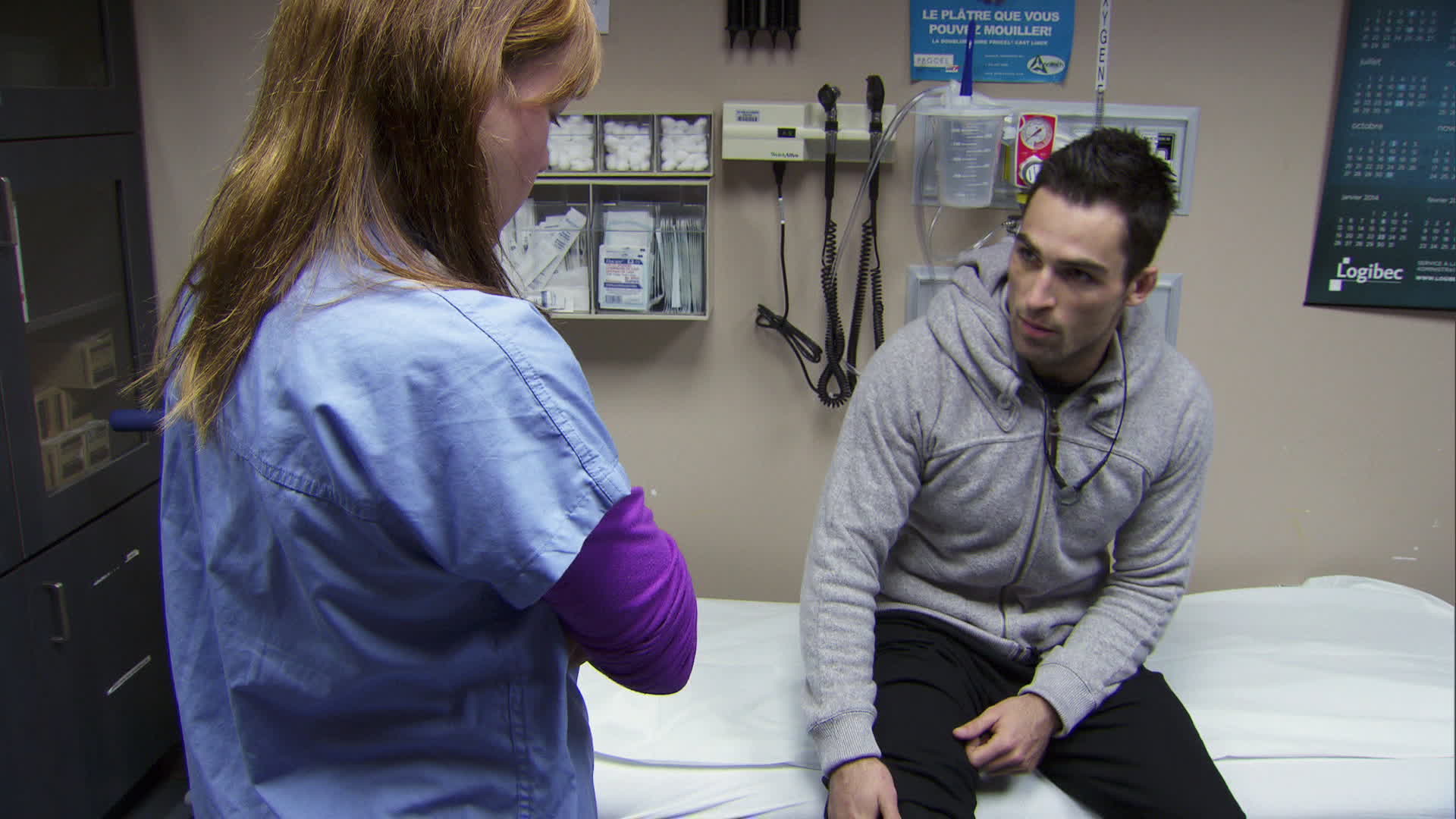 knee than is necessary. He also doesn’t want him to throw a lot of kicks in this fight. He wants Sheldon to focus on his punching, especially the jab. Dan Kelly competed in judo at four separate Olympics and Holanda emphasizes how Sheldon will have to keep distance.

On the Team Australia side, we learn more about Dan Kelly. All his teammates compliment his aggressiveness and constant pressure. He always moves forward and is unrelenting when it comes to pushing opponents. Coach Noke admits that while Kelly, “Doesn’t look athletic at all, he’s 100% the whole time.” Nicknamed “The Grizzly,” it also seems that Kelly has a bit of a mean streak in him.

Weigh-ins go by without incident. Kyle Noke then brings both teams together to hear a message from Patrick Cote. He lets them know that even though the TUF house is normally on lockdown, for one night only they’ll get a TV and be able to watch Georges St. Pierre defend his title against Johny Hendricks. True to his word, as soon as both teams arrive home, they house has been outfitted with a big screen television and enough snacks to supply a Royal Canadian Mounted Police Christmas party. There’s booze, a cotton candy machine, pizza, popcorn and some Canadian pastries called “beaver tails.” After some disagreements about the result of the main event and the (presumed) stomach aches, it’s fight time. 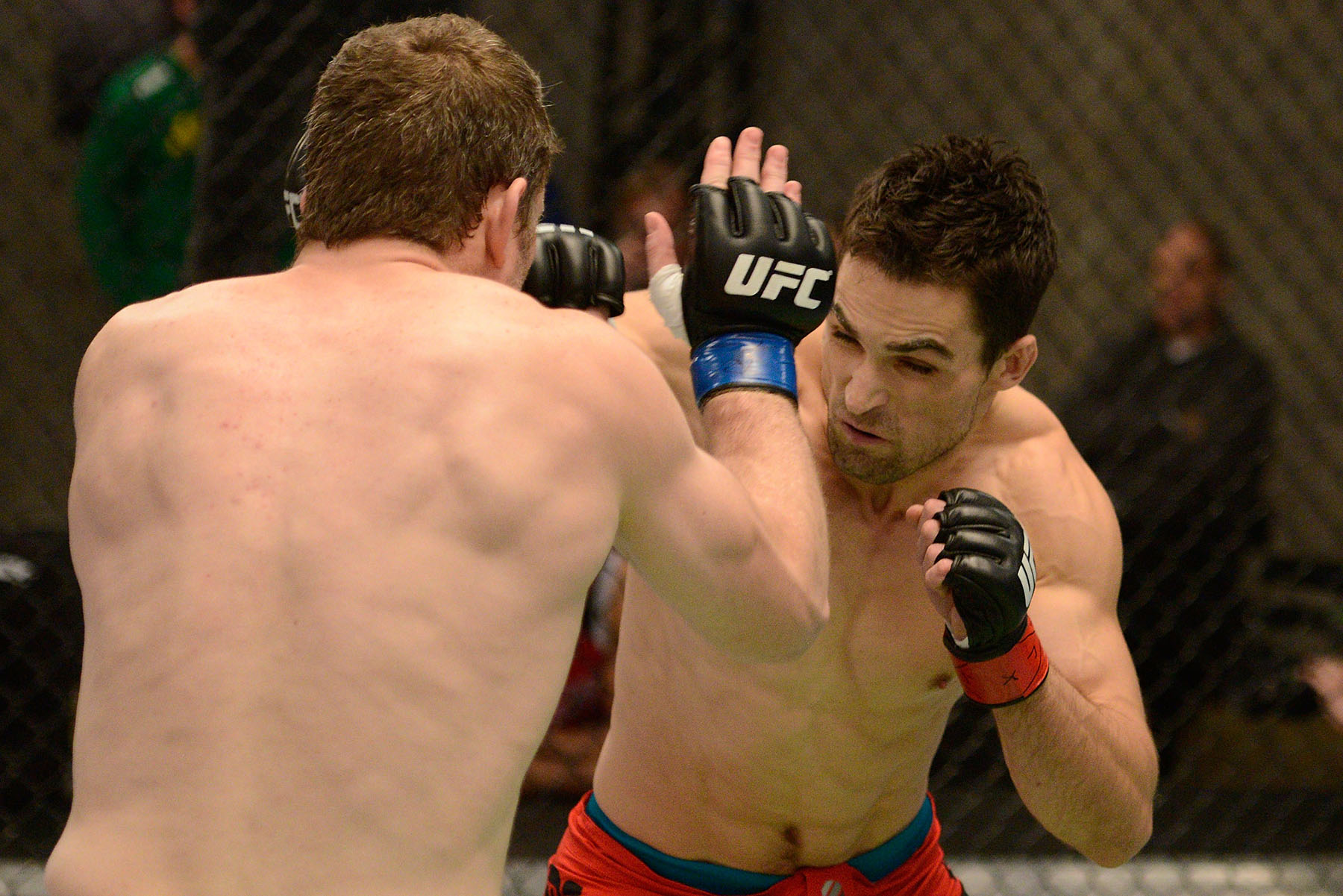 Sheldon wastes absolutely no time feeling Dan Kelly out. He opens the round with a heavy jab and immediately rushes inside. Dan tries to back away, but Sheldon keeps charging forward and connects with some solid uppercuts. He grabs a bodylock and even suplexes the Olympic judoka. Dan rises to his feet, but Sheldon slams him down again. Sheldon tries to take Kelly’s back, but he can only get one hook locked in place. Dan attempts a kneebar, but Sheldon is able to roll him over and lock in an arm triangle. Dan quickly taps out and Team Canada returns to the winner’s circle after a whirlwind 56 seconds.

Team Canada explodes in celebration. Elias and Kajan are a little too enthusiastic, but they can’t hide their emotions. The Australians are stunned. A dejected Dan Kelly sits in his corner and simply says, “That was embarrassing.” Sheldon then provides an insightful breakdown of his path to victory. He admits that bodylocking a judo expert was a bad move in theory, but he didn’t know how long his knee was going to hold up. He had to go full force and just see what happened.

Back in the locker rooms the Canadians continue their elation and Sheldon’s impressive performance. The quiet, somber Canucks of weeks past are no more. Seems like winning cures all ills. The doctor comes in to the Team Australia locker room to check out Dan, who twisted his knee during the fight. The doctor thinks that there’s something wrong with Dan’s cruciate ligament and he’ll have to get an MRI to find out the full impact. Dan doesn’t say much about the injury other than, ‘It’s bad.” As he makes his way to the hospital, he contemplates retirement. He’s not a young man anymore and if his ACL is torn, it could be a year until he’s even ready to train again.

The mood on Team Australia quickly transitions from melancholy to anger. They weren’t happy 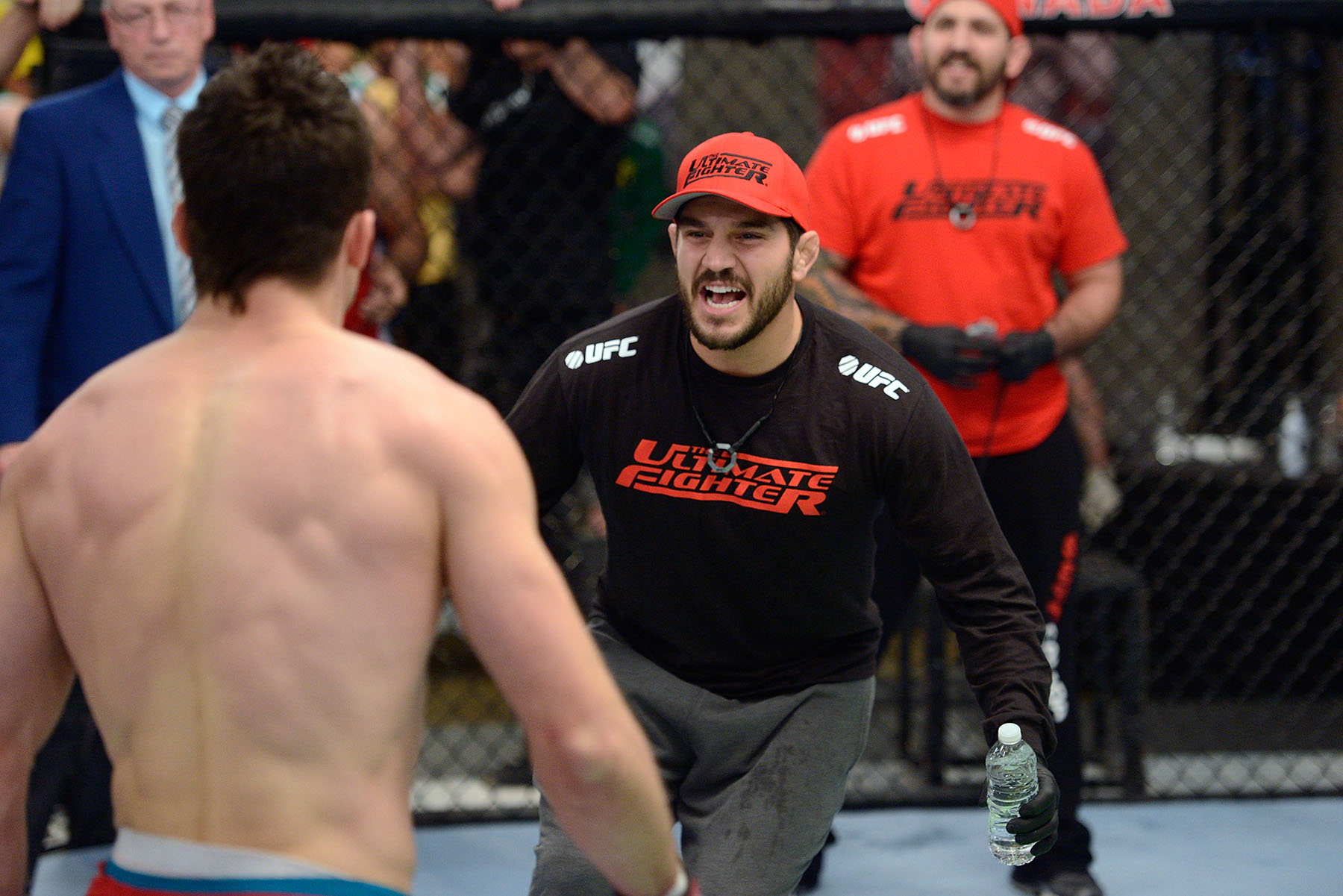 with the way Team Canada reacted after the fight, specifically Kajan and Elias. Vik is upset and wonders why they would, “Kick a guy while he’s down.” Zein talks to Elias and gets an apology, but that’s not enough for Brendan O’Reilly. He won’t forget this slight and hopes he can get his hands on one of the Canadians on the TUF finale.

The show wraps up with the fight announcement for next week. It will be the final welterweight preliminary fight and will pit Team Canada’s Olivier Aubin-Mercier and Team Autralia’s Jake Matthews.

Will the Australians rebound from Dan Kelly’s loss? Do the Canadians apologize for their conduct? Are there any more naked activities? Find out this and more next week on The Ultimate Fighter!