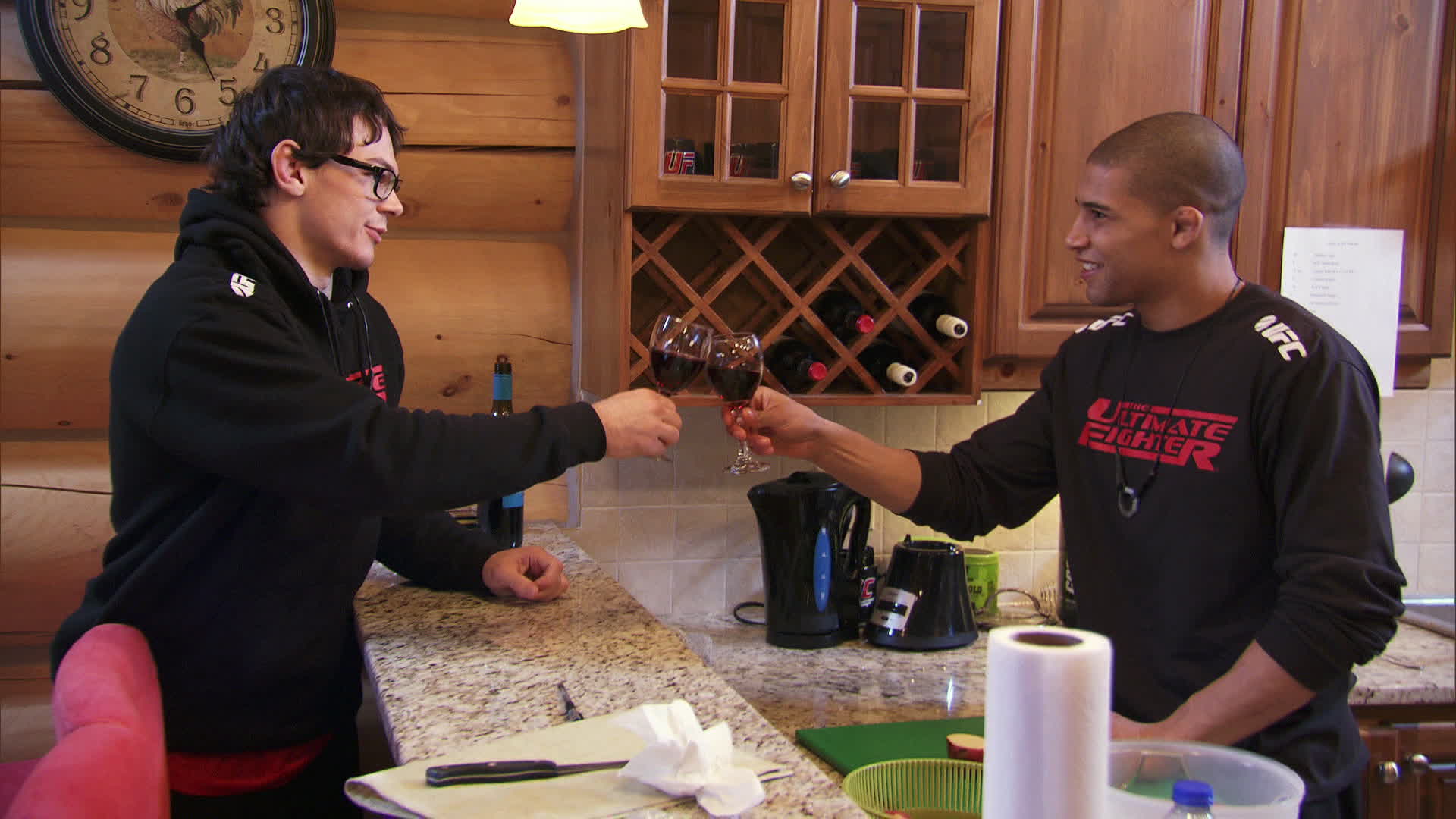 The episode opens with Team Canada celebrating Kajan Johnson’s victory from last week. Instead of your usual beer fueled rager, they decide to class the joint up with some red wine. Team Australia walks in the middle of the party and makes some awkward conversation. One guy that definitely has no trouble talking is Elias Theodorou. He’s in the hot tub with some of the other housemates showing off his next level bragging skills. He even dubs himself, “the top middleweight in Canada.” Team Australia seems to be asking him questions about his career and he’s all too happy to indulge them. The sudden interest in Elias (who is fighting this week against Zein Saliba) makes teammate Nordine Talib suspicious. He calls a team meeting and warns all the Canadians to fight their natural Canadian friendliness and not give any information to the opposing team.

After a break we’re at a Team Canada training session. Coach Cote has brought in 4x Brazilian Jiu Jitsu champion Vitor Ribeiro in to help Elias prepare for BJJ black belt Zein. Apparently they broadcasted School House Rock in Canada because Elias tells us that, “Knowledge is power” and he’s learning a lot by being on TUF. He then gives a glimpse into the gameplan. Zein is primarily a jiu jitsu practitioner, so he wants to keep the distance and avoid clinching. On the Team Australia side, we hear Zein Saliba’s thoughts about his opponent. He jokes that even if 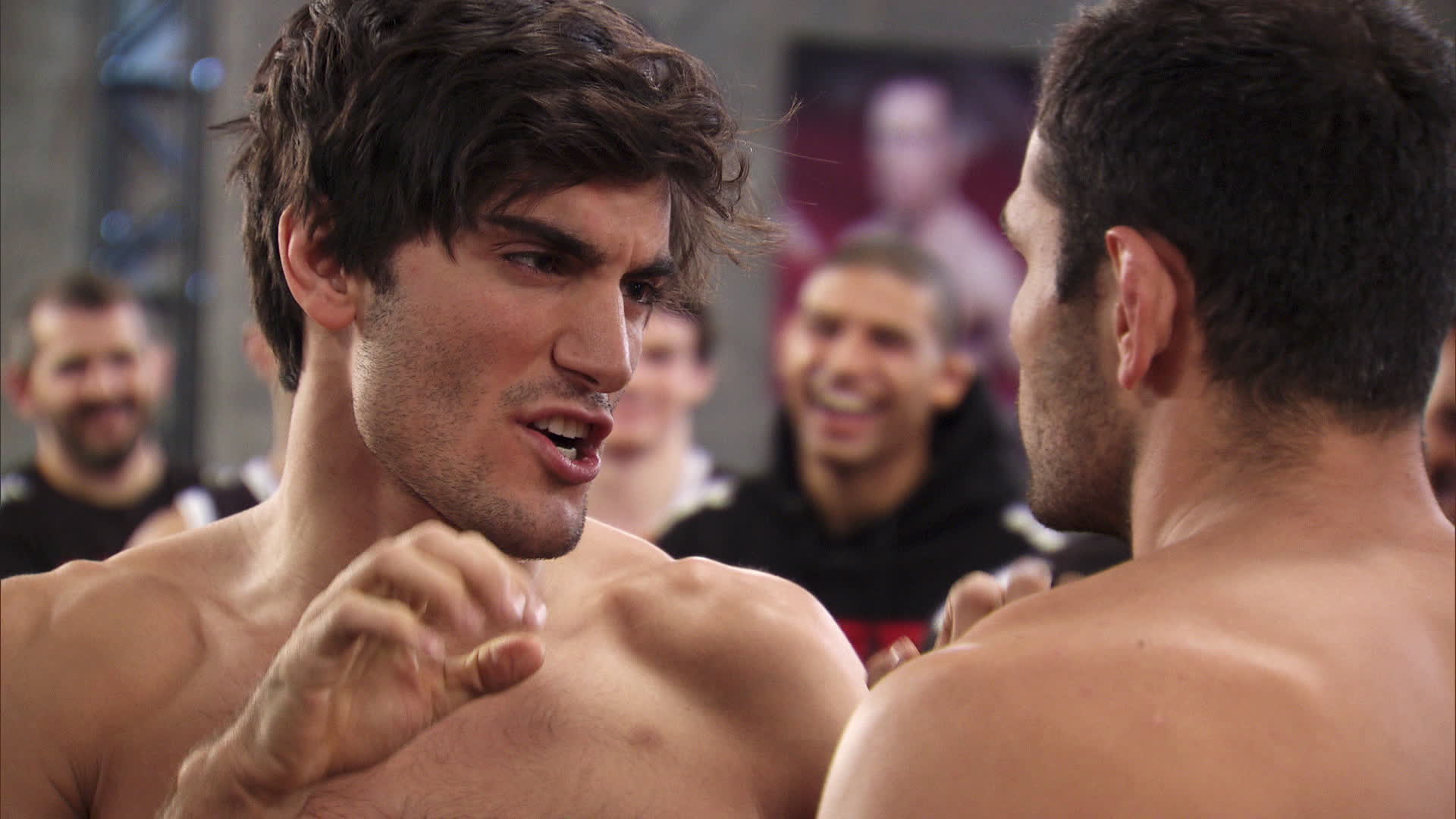 he were to knock Elias out, the Canadian would keep talking. He’s even nicknamed Elias “Buzz Lightyear” because of his distinguished jawline. As far as the fight is concerned, Zein wants to keep the pressure on and is willing to fight Elias anywhere. Speaking of Elias, we check back in with him and he still has a few more humble brags to put out there about how he’s an actor/model with “the best hair in MMA.” We also learn that he once charged someone $500 for a date. Canada must have very lax escort laws.

Weigh-ins go by without any real issues. Elias does some strange cat motions, but it fails to rile up Zein. The coaches then give their take on the fight, and both are confident that their fighter will win (surprise, surprise). Cote warns Elias to avoid getting into a brawl and to use a lot of head movement and straight punches. Kyle Noke doesn’t reveal much in the way of strategy. “[Elias] loves his hair, he loves his face. Hope he doesn’t mind getting punched in it.” 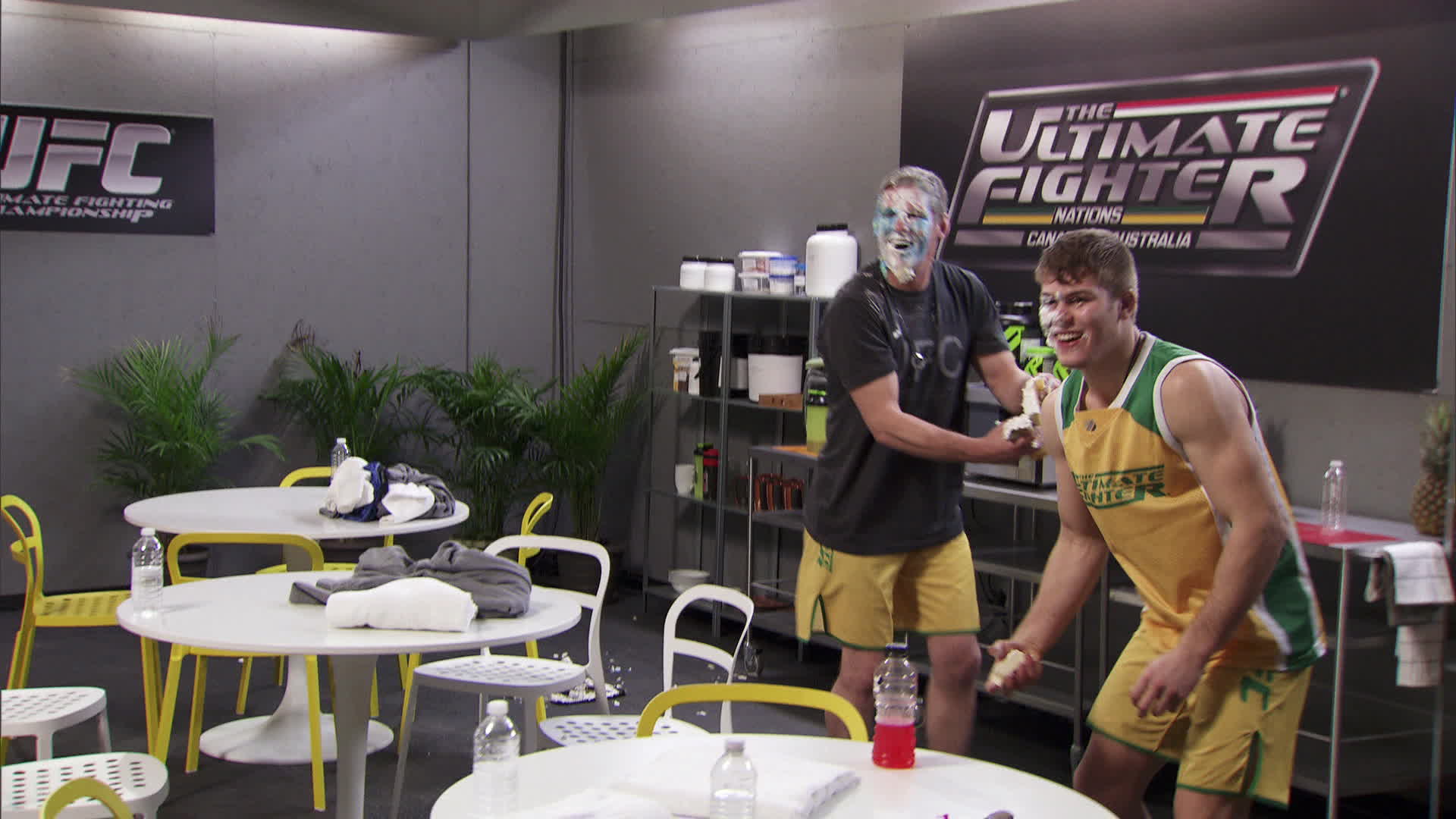 Back at the house, Patrick Cote stops by with the rest of the coaching staff. He alsobrings his nutritionist along to give the guys some guidance. The nutritionist asks Elias how he rehydrated after weigh-ins and the only response he gets is, “Everything.” In polite Canadian fashion, he tells him that may not exactly be the soundest strategy.  While the Canadians are getting nutrition tips, the Australians are eating cake in celebration of Dan Kelly’s birthday. Most of it winds up on Kelly’s face or the floor, so hopefully we won’t have to worry about the weight issues of last season. In the run up to the match we hear assistant coach Martinez yell at some people and Elias claim he’s only been hit three times in his entire eight fight career. It seems like a questionable boast, but we’ll soon see because it’s fight time!

Elias strikes first with a kick/punch combo and pushes Zein against the fence. Zein fights the initial single leg attempt and the two pummel for position. After failing to break Elias’s grip, Zein is finally able to slip out and grab a waistlock. Elias quickly breaks the hold and puts Zein right back against the fence. The Australian scores a couple knees, but Elias keeps attempting the takedown. The two reverse positions a few times and score a couple strikes on the inside, but Elias’s persistence finally pays off and he scores the takedown. He can’t hold Zein down, though, and the two scramble back against the fence. Elias reaches for another single leg, but Zein prevents him from finishing. Again, the Canadian’s tenacity works as he finally gets deep on Zein’s hips and slams the Australian to the ground. With 30 seconds left in the round, Zein rises back to his feet, but he’s quickly slammed right back to the mat. Elias takes top position and is ready to attack as the bell rings to end the round.

Zein comes out aggressive and opens the round with a Superman elbow strike. Elias avoids it and forces the action against the fence once more. This time around, Elias wastes little time jockeying for position and scores a double leg takedown. Zein tries to work different angles from his guard and lock up a submission, but Elias smothers every single attempt. As Zein reaches for a kimura, Elias takes the opportunity to pass to half guard. He’s unable to capitalize as the Zein uses the brief opening to climb back to his feet. As they fight for position, Elias secures a front headlock and snaps his opponent back to the mat. He moves from full mount then to side control, but doesn’t really mount any offense. Zein slides out and even takes Elias’s back. Zein tries to finish the rear naked choke, but he’s doesn’t have the hooks in deep enough. Elias shrugs him off, moves to side mount and scores a couple short elbows and body punches. Zein 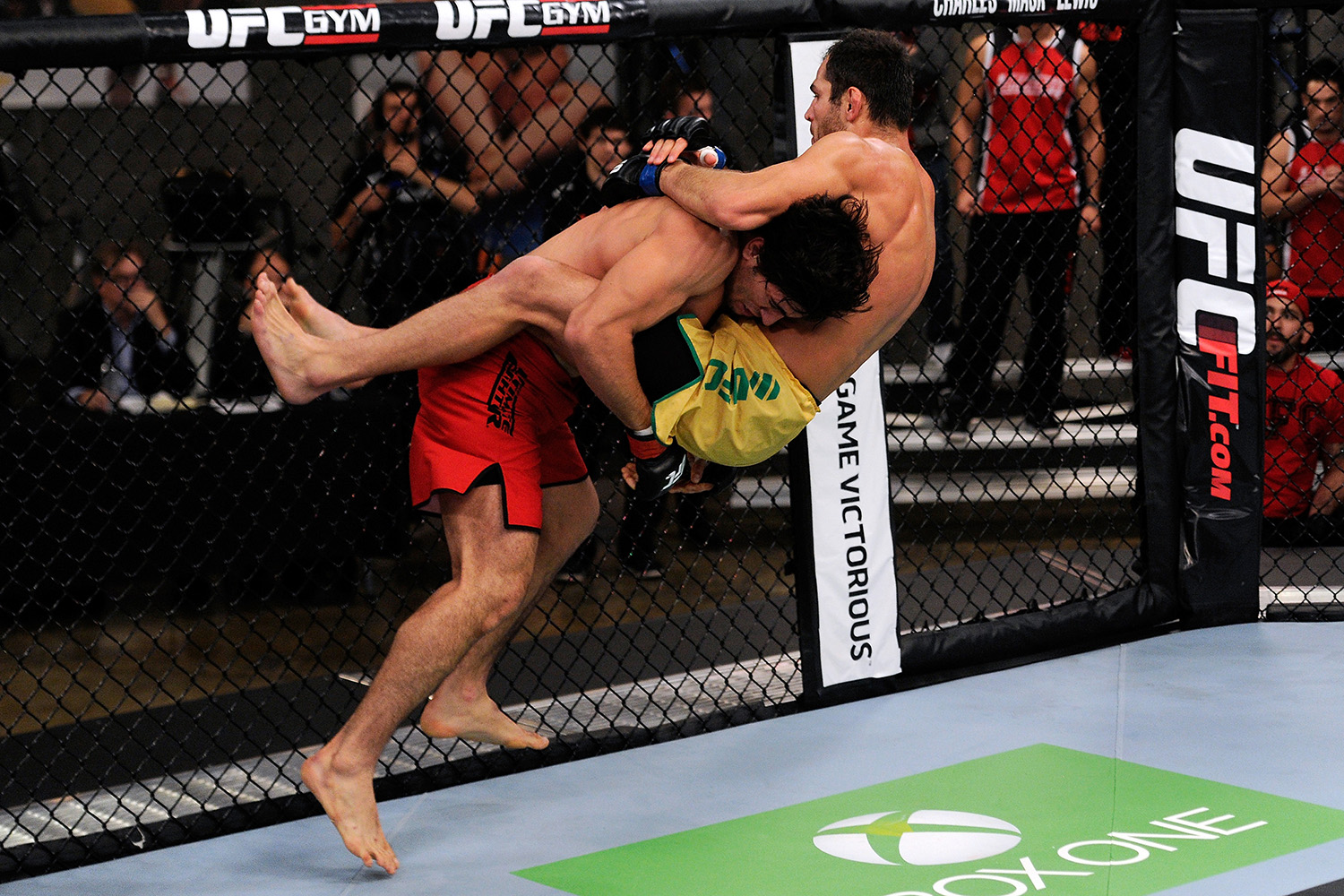 is breaks out, but it’s too little too late and the round ends.

Elias clearly wins the decision. Cote credits Elias’s pace and conditioning as the key to victory. Coach Noke blames Zein’s lack of experience and his inability to capitalize on opportunities. Elias is quite proud of himself and claims he was able to do “whatever I wanted to do.” We quickly move to the fight announcement which will feature Team Canada’s Chad Laprise against Team Australia’s Chris Indich. Cote calls Chris “not very mobile” and thinks that he has no chance of taking down Chad. Noke hints at a not so friendly rivalry between the tow fighters and is happy Chris we’ll be able to get his hands on Chad.

The episode wraps up with a preview into next week. Does Team Canada continue their dominance? Who is the Team Australia mystery coach? On a scale from 1-10, how awesome are didgeridoos? Find out this and more next week on The Ultimate Fighter!