Recap from the 11th episode of The Ultimate Fighter: Canada vs. Australia, featuring the semifinal bout between Elias Theodorou and Tyler Manawaroa. 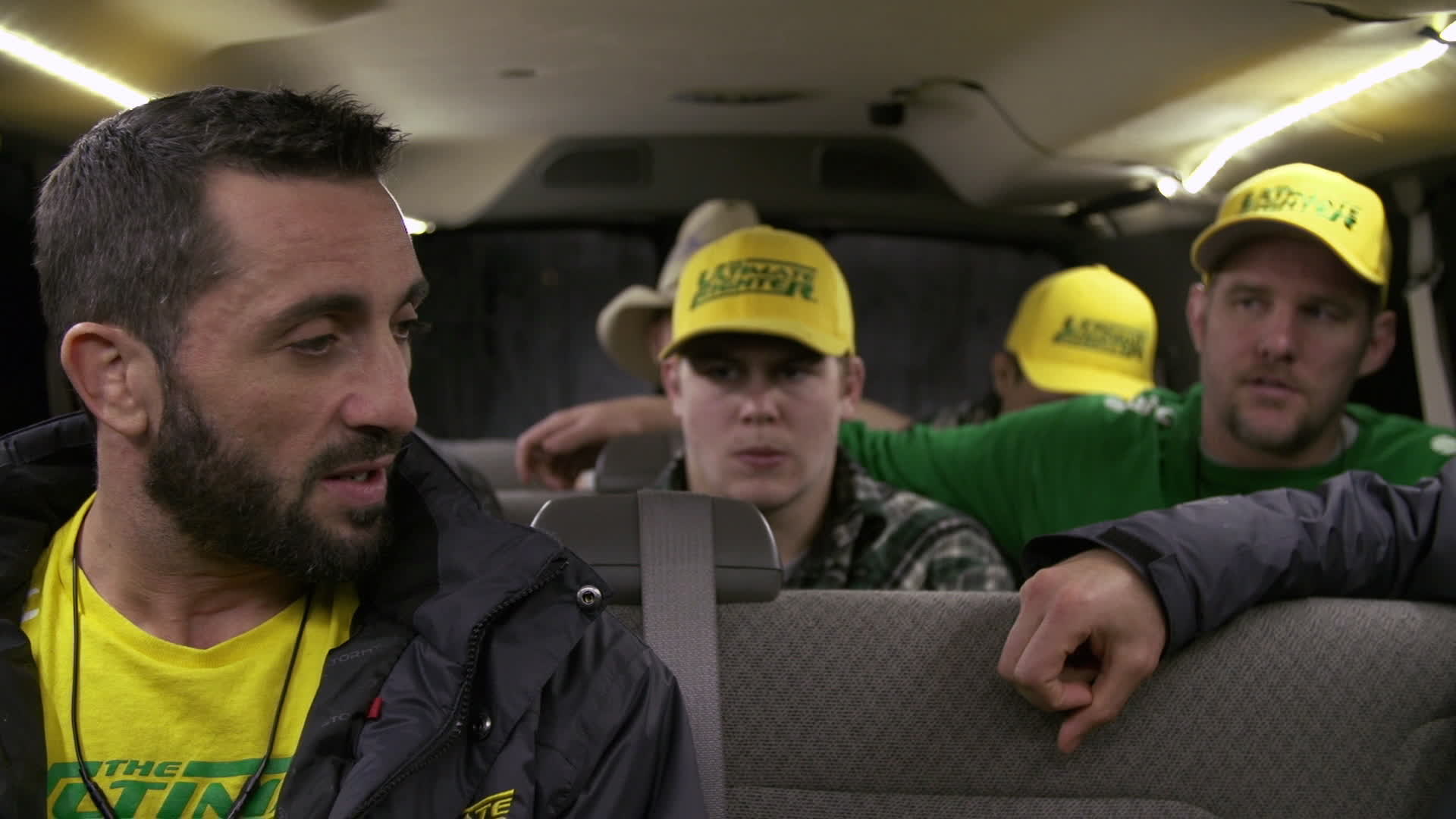 The episode begins with Chad and Team Canada discussing his devastating KO over Kajan from last week. Chad still seems to be shaken up over injuring Kajan while the other team members are more concerned with the fact that Team Australia cheered for Kajan. We cut to the Brendan O’Reilly. Even though he’s had his differences with Kajan, he and the rest of the Australians wish they could have helped somehow.

We’re back at the house and Chad’s guilt increases when Kajan walks in the door bruised and swollen. “This whole day has been weird,” Chad sighs. “I just picked up the biggest win of my life and I feel terrible.” Kajan reveals his jaw was broken in three places and that fact hits Chad even harder. Kajan tries to put his teammate’s mind at ease. “I would have done the same [thing] to you...if you would have tried less, I would have been insulted.”

We move to Team Australia’s training session as they prepare Tyler Manowaroa for his semifinal match against Elias Theodorou. Tyler tells us he’s earned the nickname “Wild Thing” because he doesn’t really go into fights with a game plan. He just does whatever seems to work. Teammate Zein Saliba calls Tyler’s striking “unorthodox” and underlines how hard Tyler’s hard to follow because he attacks at different angles. Coach Noke doesn’t seem to be worried about Tyler’s chances and calls the fight “his to lose.” Tyler also shows off how he puts as much thought into his tattoos as he does his game plans. He has an owl “because it looks cool” and even gave himself a tattoo. Back at the house we can add diet to the list of things Tyler doesn’t think all the way through. He cooks french fries and tater tots in about 3 inches of oil and then douses them in cheese.

The focus shifts to Elias and Team Canada. In contrast to the preliminary round fights, the semifinal 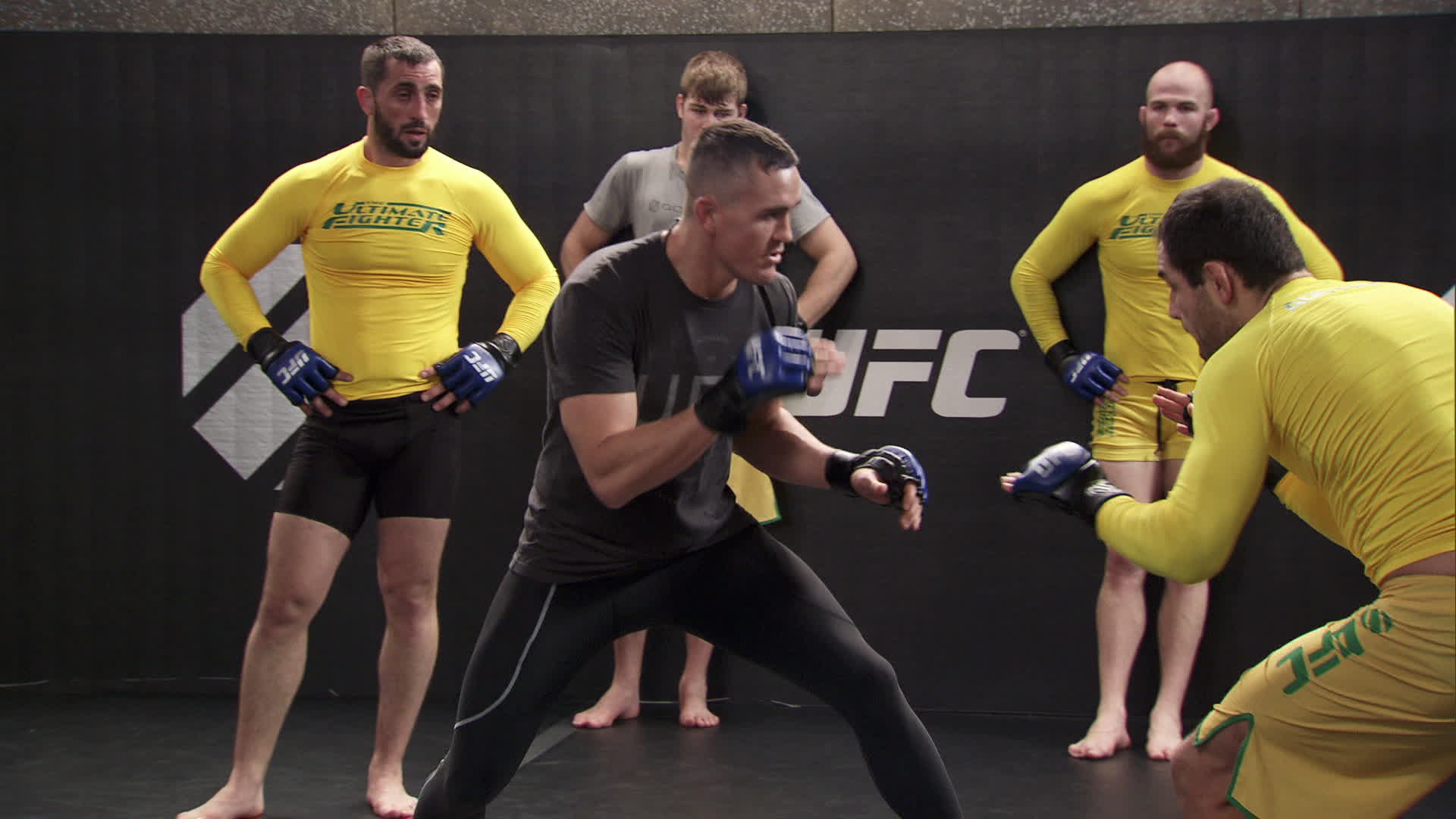 fights will be a full three rounds. Elias comments that this is perfect for his style because, “I’ll punch him just as hard in the third as I did in the first.” He also talks about how he figured out a few of Tyler’s tendencies from his first round fight against Nordine Taleb. Most notably, Tyler drops his hands after exchanges and Elias will be able to counter effectively. In contrast to Tyler’s style of fighting, Elias takes a more deliberate approach toward fighting. “[Tyler’s] going to be throwing things for the sake of it, I’m going to be calculated.”
At weigh-ins Elias dons his gladiator mask and yells, “This is Sparta!” in Tyler’s face. Coach Noke is not too impressed with Elias’s performance and wonders if he’s even seen the movie 300. He knows that Leonidas dies at the end of the movie, right? Action movie spoilers aside, its fight time!

Elias opens with a body kick and the two are clinching within the first 10 seconds. They trade position against the fence a few times and Elias drops for a single leg. Tyler defends, Elias moves to a bodylock and drags Tyler down. The Aussie makes it back to his feet quickly, but Elias continues pressuring him against the fence. Elias lands a few more takedowns, but Tyler rises to his feet immediately each time. The two spend the majority of the round doing this dance until the 1:40 mark when Tyler scores a trip takedown of his own. He takes Elias’s back, but can’t flatten him out. Elias stands up and falls back, aggressively slamming Tyler to the ground. This shakes Tyler loose and Elias scores one more takedown as time expires.

Tyler comes out hard in the second round and quickly dives in to attack. Elias ducks and secures another waistlock. Elias can’t keep Tyler on the ground, but Tyler can’t shake Elias off. Tyler finally reverses position and they break apart. Tyler lands a solid knee, but misses his spin kick attempt. Elias answers back with kicks and shoots. He holds Tyler against the fence, but loses position. Tyler attempts a takedown of his own, but Elias is ready. He comes back with a single leg, switches to a double leg and puts Tyler on his back with less than a minute to go. Elias doesn’t generate much offense, but he finishes the round in the dominant position. 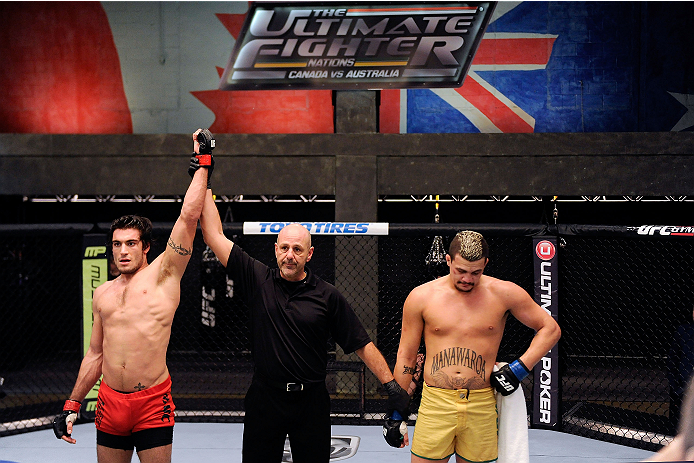 Before the round starts Kyle Noke tells Tyler, “We’re down two, you need to finish this guy.” As the round beings, the two fighters clinch up and exchange knees. Elias changes levels and brings the fight back to the ground. Tyler tosses up armbar and triangle choke attempts, and Elias defends easily. Tyler has an active guard and keeps trying to cut angles for submission, but Elias continues to smother him and give few openings. As Elias moves to advance position, Tyler uses this opening to get back to his feet. He’s not given and breathing room, though, and Elias continues to press forward working for a variety of different takedowns. There’s finally some separation, but Tyler doesn’t use it wisely. Visibly frustrated, he jumps in recklessly and is taken down again. He has a chance for a last minute guillotine, but Elias pulls his head out. Tyler continues to fight until the end, but Elias passes to side mount and that’s where the fight ends.

The judges’ scorecards come back and Elias takes the unanimous decision. Patrick Cote credits Elias’s strength and says, “He was too much for Tyler on the ground.” Noke disagrees and calls the fight “not very entertaining” because Elias “grapple humped” Tyler the entire time. He also comments that Tyler never made it out of first gear and that “both fighters are responsible for a boring fight.”
We close with a preview for next week. Can Richard Walsh beat Olivier? Who wins the coaches’ challenge? Why do Australians hate Canadian Moose? Find out this and more next week on The Ultimate Fighter!