Recap from the 10th episode of The Ultimate Fighter: Canada vs. Australia, featuring the semifinal bout between Chad Laprise and Kajan Johnson. 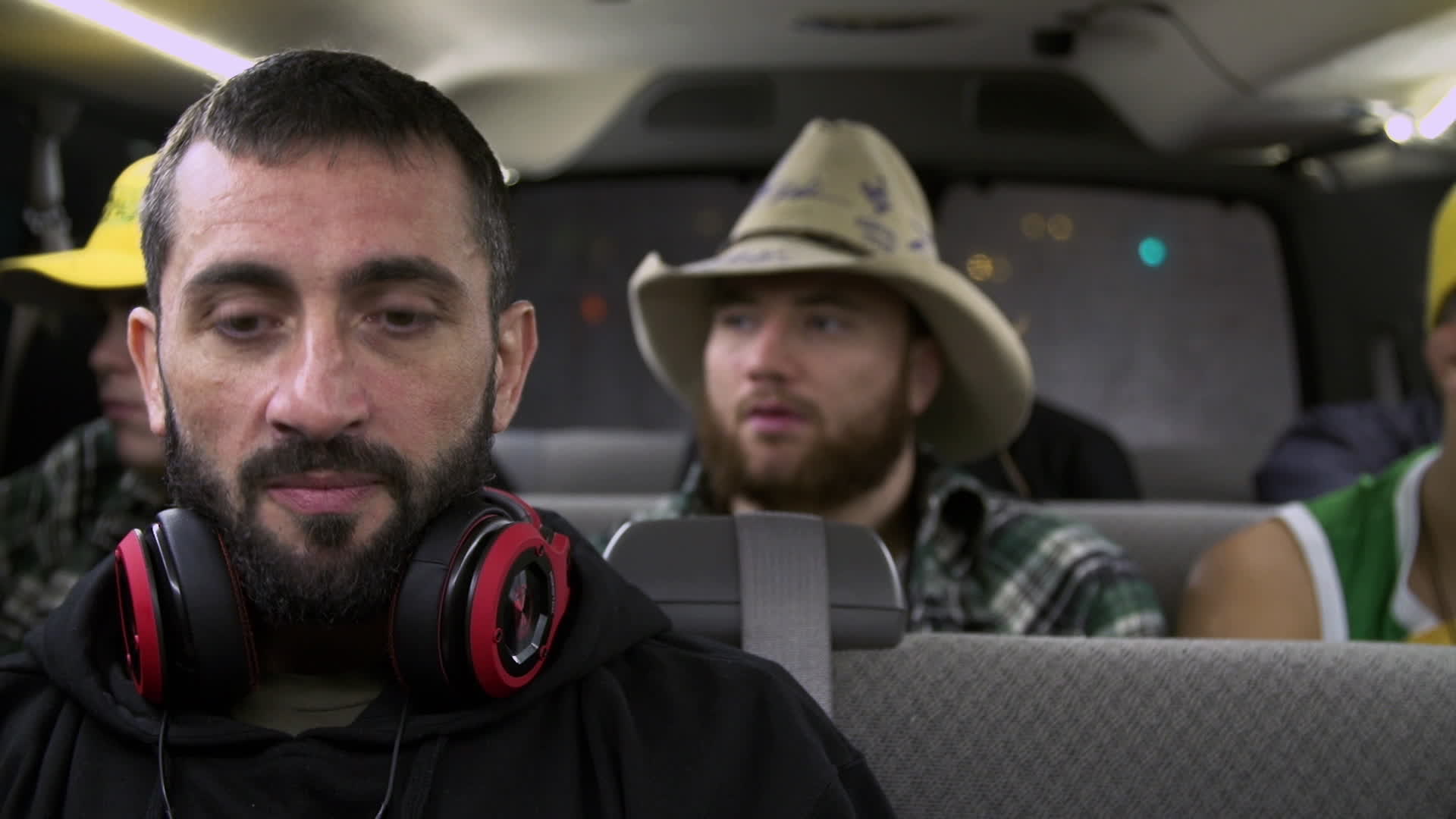 The episode opens in the vans on the way back from last week’s fight between Vik Grujic and Luke Harris. Excited about eanring his first knockout, Vik remarks that Luke now “looks like Frankenstein,” with all the stitches in his head. Back at the house Sheldon lets everyone know that he’s been cleared to fight in the semifinals and we go straight to the semifinal deliberations.

Coaches Cote and Noke join Dana White via satellite as they call each individual fighter into the room to ask whom they want to fight. Kajan is the first to go in and repeats his desire to fight Richard Walsh. Richard follows next and asks for Kajan because, “He’s got the biggest mouth.” Chad Laprise is third to come in and asks for Richard as well. His stated reason is that Richard will stand and trade with him so it would make for an entertaining fight (how selfless of him). As Kajan has told us in the past, though, that might not be 100% truthful. The rest of the fighters come in, give their opinions and it’s time for the fight announcements. The semifinal round this season will be:

The first fight up with be between teammates Kajan and Chad. They both state that they’re upset that two Canadians have to fight one another, but won’t let that get in the way of achieving their goal. Patrick Cote refuses to pick a side in the matter, and will step aside. As a result, the have to decide how they will split up the remaining coaches. Chad even asks Team Australia jiu jitsu coach Roberto Tussa to help out.

We hear some more from Kajan and he discussed the tough road he’s traveled up to this point. 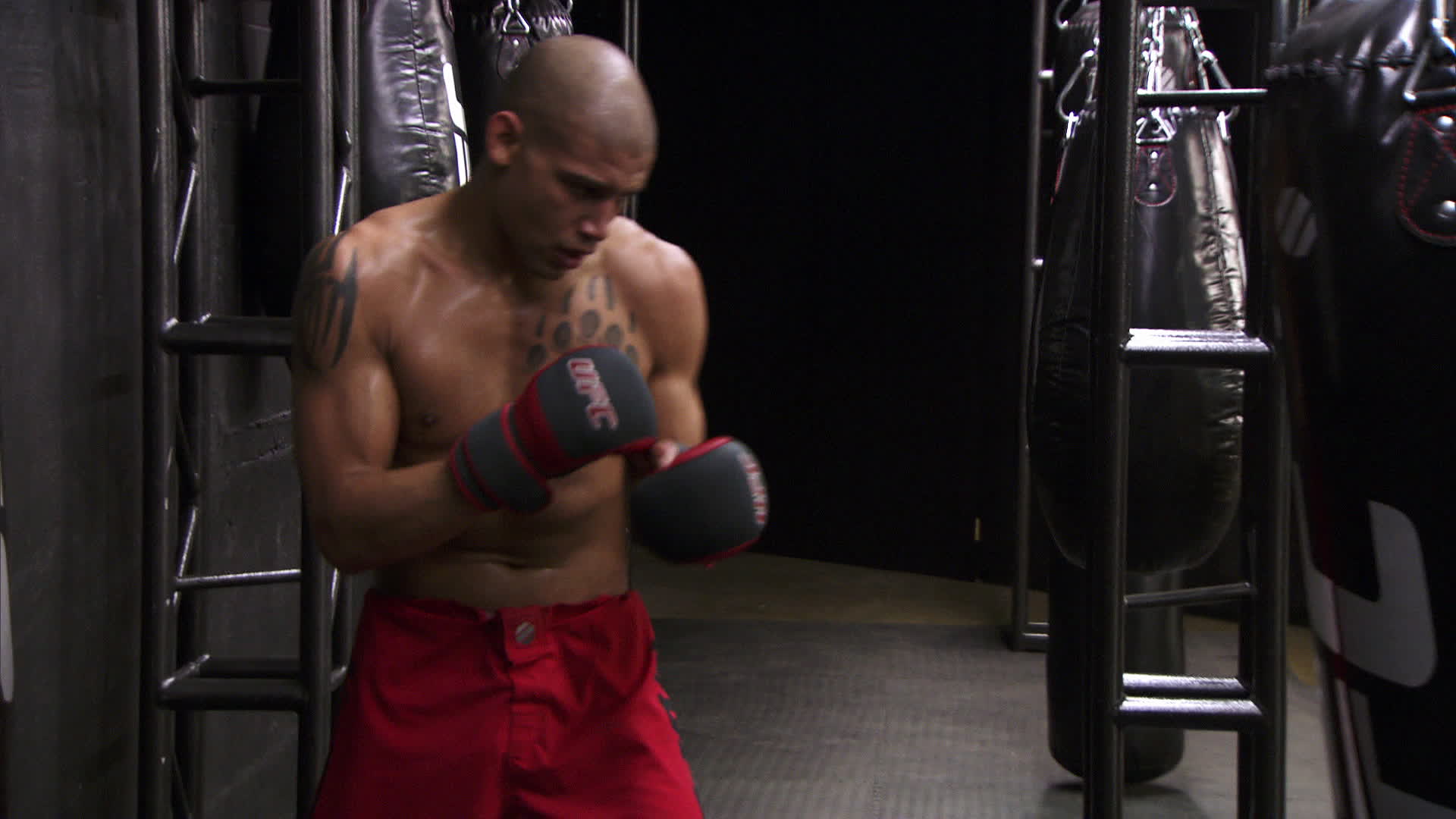 “I live in the ghetto. I don’t know if I can pay rent.” He goes on to emphasize how he’s sacrificed everything for his career and his whole life as he knows it is at stake. Chad opens up more about his rough childhood and how he began fighting for all the wrong reasons. Before he just wanted to hurt people, but now he does it to give glory to God. His dream would be to open up his own “fight church,” where he’s both pastor and coach.

Weigh-ins go without a hitch, but the same cannot be said for the Team Canada dynamics. Kajan asks teammate Nordine to help him, but Nordine says that he does not feel comfortable being put in that position. Kajan ends up having the team’s jiu jitsu coach Fabio Holanda, and that’s it. Chad, on the other hand, has Team Canada striking coach Kru Ash, wrestling coach David Zilberman and the help from Tussa. Even Patrick Cote, who said that he wanted to be left out of it, gives Chad some tactical advice beforehand. How will the lack of coaching affect Kajan? We’re about to find out because it’s fight time.

This is a straight kickboxing fight. Both men stay on the outside and trade jabs back and forth. Chad definitely has the power advantage, but neither one seems to be able to land sustained combinations. Kajan is kicking a lot more, but nothing makes a large difference. Halfway through the round Chad’s punches start to find their mark and Kajan shoots in for a takedown that’s easily rebuffed. They exchange a few more strikes and Kajan moves in for another takedown. Chad shrugs him off and the two continue to trade punches on the outside. At the ten second mark, Kajan reaches for another takedown and almost finishes it, but Chad saves himself by grabbing the cage. The round ends and the ref warns Chad not to do it again or he’ll lose a point.

The second round mirrors the first in many ways. Both men stay on the outside, and Kajan works his low kicks while Chad keeps power punching. Kajan attempts his first takedown earlier this round, but eats a big hook for his troubles. The head movement and footwork from both men has slowed down this round. More strikes are starting to slip through defenses and the damage is starting to show. Kajan backpedals more this round and Chad keeps stalking him down. Both are moving and exchanging shots, but at the 46-second mark it all changes. Chad lands a thunderous overhand right and Kajan is out. As he comes to, the first thing he says is, “I think my jaw is broken. Aww, that sucks.”

Kyle Noke says that Chad was just too good for Kajan. Patrick Cote believes that Chad won because he broke Kajan mentally. Olivier, though, doesn’t feel the same way. He calls the way that the coaches helped Chad and avoided Kajan “unfair.” Even Vik Grujik talks about how the way things played out for Kajan didn’t sit well with him. We cut to an emotionally distraught Kajan and he feels singled out. “Nobody helped me,” he tells us. “Everybody helped him. Fabio didn’t say [expletive]. It’s still my fault, but [expletive].” As Kajan is carted off in an ambulance he closes with one of the most poignant things we’ve ever heard on The Ultimate Fighter. “[It’s] just another test, I just don’t know why I’m tested so much.”

We close with a preview into next week’s episode. Will Elias be the second Canadian to make it to the finals? Can the young Tyler Manoawaroa rise to the occasion? Does Kajan air his grievances? Find out this and more next week on The Ultimate Fighter!