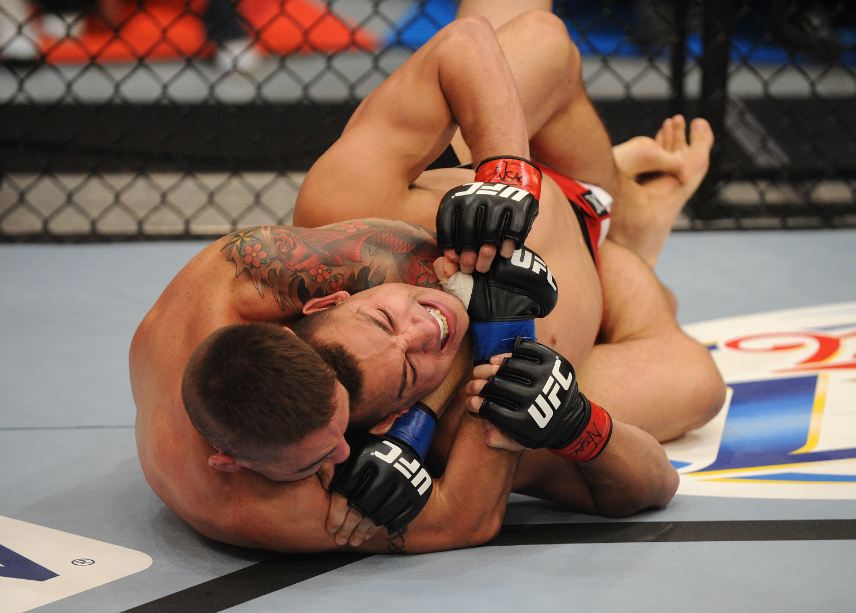 This week, TUF Live featured a classic matchup of striker vs. grappler. Team Faber’s Joe Proctor is a jiu-jitsu specialist and a training partner of TUF 5’s Joe Lauzon; Team Cruz’ Chris Tickle is a self-taught striker whose one style is, according to coach Dominick Cruz, sprawl and brawl. The fighters’ personalities were also polar opposites, and in the end, the understated dark horse Proctor used his skills to steal the spotlight from the boisterous Tickle via first-round tapout.

With all of Tickle’s past losses coming via submission, his coaches knew that keeping the fight standing would be Tickle’s key to success. “The second Proctor goes to take him down, he has to pop right back up,” said Cruz before the bout.

The bout began with Faber yelling for footwork from his charge, as Team Cruz’ Tickle played aggressor. Tickle touched Proctor with a straight, and threw a mix of low and high kicks. Proctor responded with an early takedown attempt, but Tickle tied him up against the cage for some knees and dirty boxing. Tickle threw a big hook on the exit that seemed to temporarily stun Proctor, but the action resumed in the middle of the Octagon.

Surviving Tickle’s initial flurries may have dissolved Proctor’s nerves, as his offense picked up steam in the next exchanges. Although both men were measured and controlled, they took turns coming forward with strikes until Proctor moved forward and got the clinch, which Tickle again turned into a tangle on the cage with his dirty boxing.

But everything changed with one minute left, as Proctor shot and got a huge takedown. As Tickle sprang back to his feet, Proctor easily took his back standing and returned the bout to the ground. With plenty of time left in the round, the jiu-jitsu specialist worked in the rear-naked choke and got the tap at 4:42 of the round.

“Tickle is tough – he hits like a truck,” said Proctor after the bout. “I’m a jiu-jitsu guy. I did my job here.”

“I thought the first round was favoring Tickle,” said UFC president Dana White. “Tickle was picking him apart. But as soon as he got him down, he submitted him pretty easily.”

The win marked three in a row for Team Faber, who now takes the lead for the first time at 3-2 for the season.