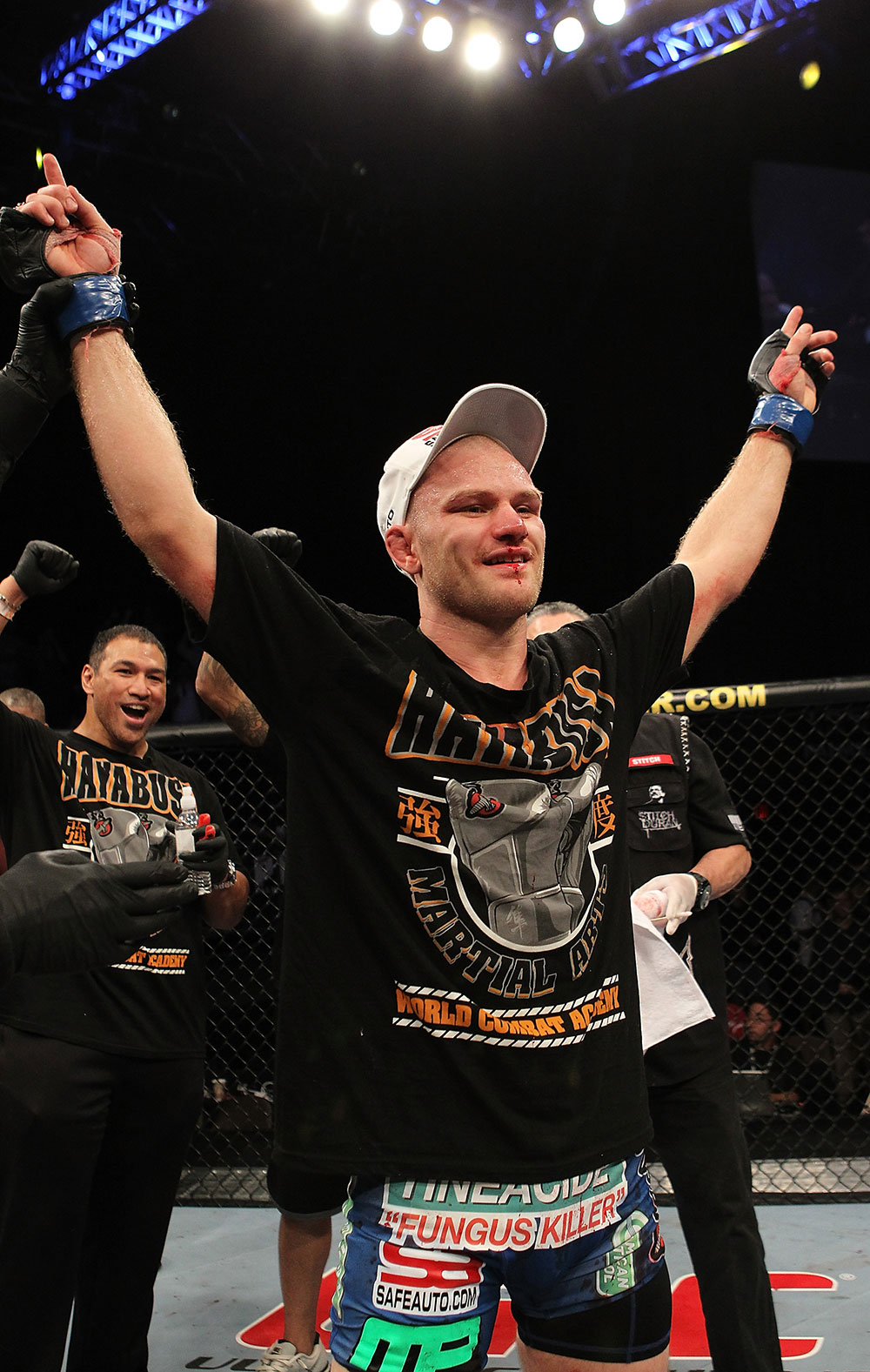 KAMPMANN FINALLY TAKES IT TO THE NEXT LEVEL

I’ve always thought of Martin Kampmann as an amazingly talented fighter who, for whatever reason, has never been able to win the proverbial big one. He certainly took one step closer to fulfilling his tremendous potential by blasting out the brutally tough Jake Ellenberger in Saturday night’s main event.

It’s time to start talking about Kampmann as a title challenger, which is something those close to him have been expecting for quite a while now.

Anyone who watched this season of TUF knows that Michael Chiesa lost his father shortly after arriving in Las Vegas for the historic first live season of the hit UFC reality show. That had to be an absolutely devastating experience for him. I honestly don’t know how he held it together mentally for 13 weeks. But that is exactly what he did, once he decided to continue pursuing his dream in his father’s memory, rather than dropping out of the show.

Chiesa will forever look back at that decision with a smile because he is now “The Ultimate Fighter.”

I don’t care if you are an Al Iaquinta fan -- I know I certainly enjoy watching him fight. It had to be tough for anyone outside of Iaquinta’s inner circle to be pulling against Chiesa. This was one of the best “feel good” stories in recent UFC times. And the raw emotion he showed after the victory summed it all up for me.

Congratulations, Michael. I know your father would be extremely proud of you right about now.

OLIVEIRA SHOWS THE BEAUTY OF JIU-JITSU

Jonathan Brookins was performing quite well against Charles Oliveira through the first half of the fight. I thought he won the first round fairly comfortably. His foe was getting bloodied and battered. But all the Brazilian needed was a single opening to forever alter the outcome of the fight.

The choke Oliveira threw on Brookins showed just how good this guy is on the ground. That was high-level stuff. There is no doubt about it. He needs to continue to improve on the feet, but this guy is an absolute savage on the ground. I think he will make big waves in the featherweight division over the next 12 to 18 months.

NOT A BAD BELATED BIRTHDAY PRESENT

Justin Lawrence turned 22 years old just a couple of weeks ago. For the first two rounds, it appeared that he was still fighting off post-birthday effects. He looked flat and a bit listless against John Cofer in the televised opener.

Then, it all changed.

Lawrence threw a picture-perfect cleanup high kick seconds into the final round that left his foe in an unconscious heap. It was an explosive win for the phenom’s UFC debut. He is a phenom because this guy has been training for this moment since he was six years old, literally.

The UFC is a tough place to learn the trade. This guy is only 4-0 as a professional. Normally, I wouldn’t give him much of a chance to stick around for very long. But this guy has the amateur pedigree to possibly be the exception.

Surprisingly, Lawrence isn’t the youngest fighter on the UFC roster. That distinction belongs to the man who fought right after him, 20-year-old Max Holloway, who is a wunderkind in his own right.

The Hawaiian sensation handed Pat Schilling a serious beating. It was a great way to recover from the submission loss he suffered in his UFC debut less than four months ago.
This time around, Holloway avoided going to the ground with his opponent, something that cost him a win in his debut. That was a bit surprising because Schilling is a former collegiate wrestler, and Holloway’s long, lean frame looks ripe for takedowns. But he showed tremendous takedown defense and balance.

This kid is an interesting featherweight prospect. He has a ton of spirit, as do most Hawaiian fighters. I know that is a gross over-generalization; it is what it is. I’d like to see him add a bit of muscle to his frame, but that is being extremely nitpicky. After all, this guy isn’t even old enough to buy a beer yet.