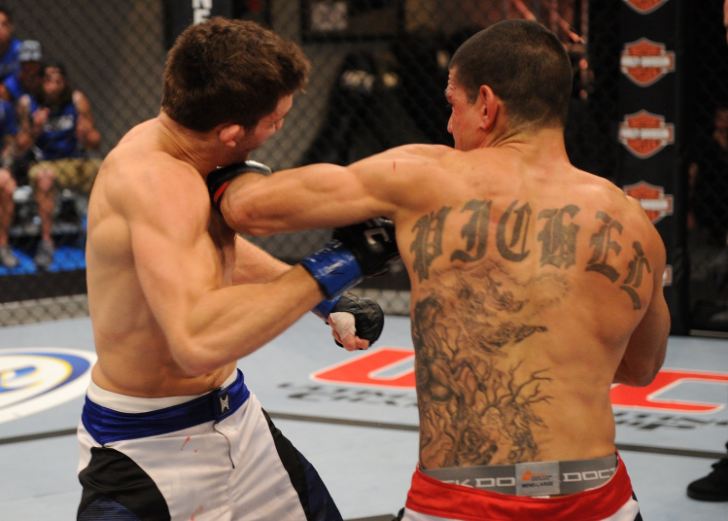 After three Team Faber wins in three weeks, Team Cruz got back on the board as Vinc “From Hell” Pichel finished the versatile John Cofer in just over two rounds. The still-undefeated Pichel – who’d won all 7 of his fights to date via KO or TKO – showed a new wrinkle in his game as he earned his first submission win by arm triangle early in the third round.

Round one started with Cofer standing southpaw and Pichel headhunting with huge right hands. Cofer soon shot for a takedown on his opponent, who’d struggled with wrestlers in the past, but Pichel was able to push Cofer off. For much of the round, it was Cofer who came forward with strikes, but Pichel had success on the exits with crisp counters that found their homes on Cofer’s chin. Damage showed in cuts on both men’s faces, and Pichel defended another takedown before turning it up in the last ten seconds with a flurry that sent Cofer against the cage until the bell rescued him.

Round two picked up exactly where it left up with both men swinging in a wild, if untechnical, exchange that was easily one of the most entertaining of the season to date. It was Cofer who wobbled Pichel first with a right, and then Pichel returned the favor with an uppercut. Cofer shot for another takedown, but Pichel defended using the fence and turned it into a takedown of his own, as he slammed Cofer to the mat. He landed briefly in a guillotine, but then muscled his way out as Cofer tried for a triangle from the bottom. The action sputtered out for the rest of the round, as Pichel seemed confounded by his position in reverse mount as Cofer tried guard. He moved from north-south position to side mount before the round ended to relieve them both of duty.

After those rounds, the judges rendered the scorecards tied, so the tired, bloodied men stood reported for a third sudden-victory round. Cofer looked exhausted, and Pichel capitalized, pushing forward and unloading as Cofer struggled to retain his wits. Pichel pushed the action to the mat again and landed on top, where he quickly moved from mount to side with an arm triangle locked in. Cofer had no answer and was forced to tap just 44 seconds into the round.

“Cofer’s a tough-ass dude,” said Pichel after the win. “I thought I was going to pick him apart with shots, but he didn’t take me down and I’m happy with it.” Pichel also credited Team Cruz assistant coach Shanon Slack with helping him with his takedown defense.

“That fight was awesome,” said UFC president Dana White after the bout. “Those guys never stopped battling. It was an absolute war, and that is what I love. That’s what this competition is all about.”