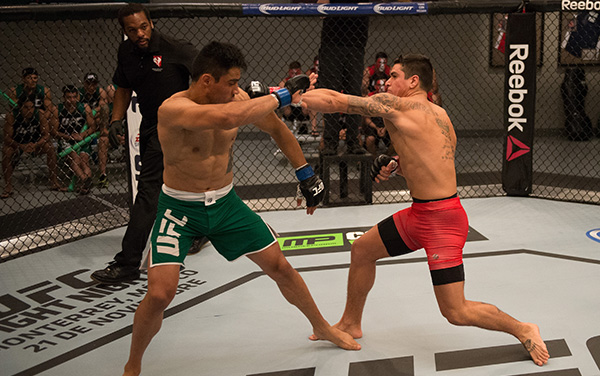 Injuries are just part of the sport of MMA.

It's no different than any other athletic competition where the body is pushed to the breaking point and sometimes something snaps. Horacio Gutierrez and Marco Olano both found that out the hard way on the latest episode of The Ultimate Fighter: Latin America 2 when the members of Team Escudero stared down two devastating and equally disappointing injuries this week.

The first came for Gutierrez, who was in the middle of practice on one of his first days under Escudero while the fighters were drilling grappling on the mats. Gutierrez was defending a takedown when his foot got stuck as he was rolling through with his sparring partner, and a moment later he was laying on the ground in agony after his ankle twisted one way while his leg went the other.

Gutierrez hopped off the mats and immediately applied ice to the ankle while keeping his leg elevated, but it was impossible for the UFC newcomer not to realize that this 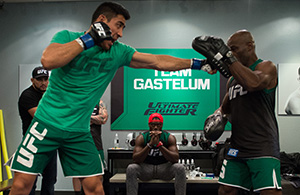 kind of injury can be devastating while filming The Ultimate Fighter.

Normally, a sprained ankle without any serious damage should only take a matter of days or possibly a week to heal up enough to get back in action, but unfortunately while competing on TUF, bouts can occur at any time and there's rarely a moment to rest, much less recover.

"This is like a nightmare," Gutierrez said, fighting back the tears after realizing his Ultimate Fighter dream might be coming to an abrupt end.

To mask his injury from the other team, Gutierrez and his roommates decided to move his bed from the top bunk down to the floor so he could sleep there instead of being forced to jump or climb up on a sprained ankle. When Team Gastelum fighters came by to chat, Gutierrez kept his foot packed in ice hidden underneath the blankets in hopes of keeping his injury a secret.

Whether Team Gastelum found out about the injury or Gutierrez was already targeted, he found out later in the episode that the ankle would be tested in rapid order. 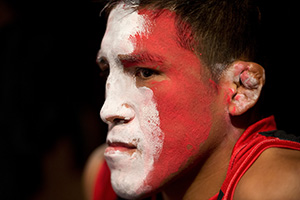 While Gutierrez continued to focus on his ankle, the members of Team Gastelum and Team Escudero took it upon themselves to make a competition for this week even if there were not obstacle courses they had to climb. This time around, the two teams opted to bet on the fighters in the upcoming matchup between Erick Montano and Marco Olano.

Everyone decided that the losing team would be forced to drag their mattresses and blankets outside and sleep on the tennis courts for a night. It took a little convincing, but everyone got on board with the idea to spice up the competition just a bit in the second week.

As the fight drew nearer, Olano stayed focused on his preparation to face Montano while also hoping to gain some respect from the competitors on Team Gastelum. Olano was a later pick in the overall competition, and he believed he was being underrated when it came to his placement on the show.

Olano is a ferocious knockout striker with six wins being finished in the first round, not to mention that he fights as a southpaw, which is a notoriously hard stance for orthodox fighters to plan for without ample time to prepare. The chip on his shoulder seemed to motivate Olano, while his counterpart was just trying to find a way to establish his own name in the sport.

Erick Montano has lived for most of his fight career in the shadow of his older sibling, UFC welterweight Augusto “Dodger” Montano, and while he's proud to call him family, he would desperately like to be known as something more than just his little brother.

The younger Montano has built a solid career, but making his name on The Ultimate Fighter would go a long way to separating the UFC hopeful from his famous older 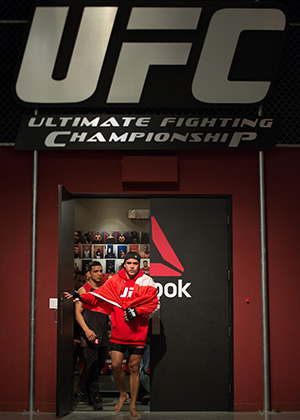 Before Montano has his chance to face Olano in the next tournament fight, Gastelum tells his own story about a fighter he calls brother and it's the same guy who opposes him on this season of the reality show.

Gastelum says that Escudero came back to his old stomping grounds after winning the championship and signed autographs for anyone and everyone at the school. On Gastelum's photo, Escudero wrote 'someday you will be here,' and just a few years later that prophetic statement came true.

But friendship had to get set aside for this season and the fight this week, where Team Gastelum went up 2-0 in the competition at the expense of another Team Escudero fighter although it certainly didn't end the way anybody wanted it to.

Montano and Olano met in the first welterweight fight of the season, with both men clamoring to make a statement with a win. Olano is best known as an aggressive striker and he didn't disappoint, as he came charging out of the gates like a bull trying to rush Montano before he had a chance to know what hit him.

Montano did a good job of avoiding the early flurry and quickly grabbed on to Olano in a clinch against the cage. Olano fired back by cracking Montano with a few hard elbows, which prompted the Team Gastelum fighter to drag the fight to the mat. Montano landed a nice throw from the body lock, but as soon as Olano landed, something was clearly wrong. 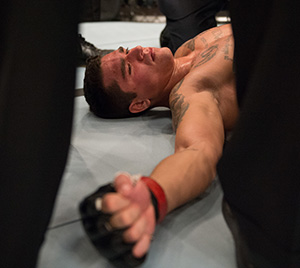 A moment later the referee stopped the fight and as Olano put his left arm in the air, his forearm was clearly injured. Both teams gasped to see Olano hurt and he eventually left the Octagon with a splint around his arm before taking a trip to the hospital.

To his credit, Montano never went overboard with his celebration, but regardless, he walks out the winner while keeping control for Team Gastelum.

For his next fight pick, Gastelum moved back to the lightweight division, where he selected Danny Salas to take on Horacio Gutierrez and, injury or not, this Team Escudero fighter plans on competing one week from now. Gutierrez had to know this would probably happen, but whether his ankle is 100-percent or not, he's going to fight because quitting just isn't an option.

Find out what happens when Gutierrez climbs into the Octagon next week to face Danny Salas, with the winner moving on to the next round of the tournament.