From TUF to the HOF: The Journey of Griffin and Bonnar 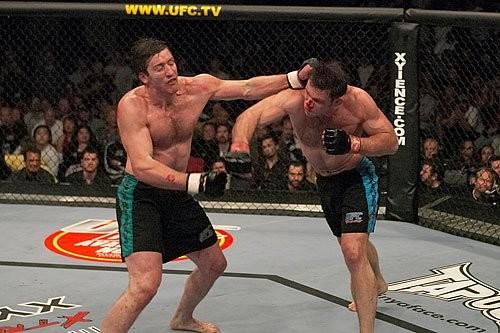 Eight years ago in Las Vegas, Forrest Griffin and Stephan Bonnar went to battle inside the Octagon to determine who would become the original Ultimate Fighter. Over the course of the gritty, three round affair, both men put it all on the line, and the outcome became an instant classic that launched a new era in mixed martial arts.

The bout created an eternal link between Griffin and Bonnar, and last Saturday morning at the UFC Fan Expo, they took another step into the record books as they were officially inducted into the UFC Hall of Fame.

The induction comes as a fitting bookend to the recently retired TUF alums’ respective careers, as both fighters have left their marks on the sport of mixed martial arts. In addition to “The Fight” being largely credited with recharging Zuffa’s heartbeat in the MMA world, Griffin and Bonnar each had memorable careers to look back on.

The 34-year-old Griffin carried the momentum from his TUF win into the light heavyweight ranks and eventually went on to become the champion of the 205-pound division. While Bonnar never experienced the same caliber of success as his counterpart, the “American Psycho” became a fan favorite for his willingness to trade leather with a collection of the sport’s best fighters.

Following the ceremony, Griffin and Bonnar shared their thoughts on entering the UFC Hall of Fame. 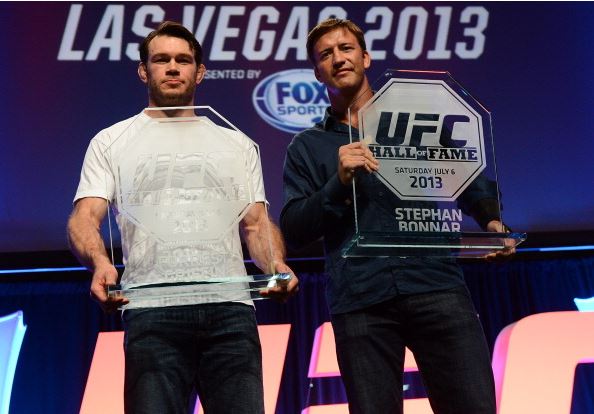 “Obviously it’s an honor,” Griffin said. “It’s the biggest thing I’ve ever done. What else do you hope for? It’s very cool for me because in other sports like football, basketball and baseball, guys like Jerry Rice have to wait five or seven years to be in the Hall of Fame. I definitely like the immediacy of it and it helps to lighten the load of not being able to compete at the level I would like to.

“I just want to thank these guys for letting me be a part of this organization,” Bonnar offered. “Not just fighting in the cage, but all aspects of the organization. I love this sport more than anything and it’s been really hard letting all of that go and moving on. I want to thank the UFC for everything.

With their careers now behind them, Griffin and Bonnar are now faced with the difficult task of moving on from life inside the cage. Leaving the heat of competition can be a difficult task for athletes to overcome and the recent Hall of Fame inductees are no different.

“I was chosen for the show in 2004, and ever since then, my life has been all UFC,” Bonnar said. “Not just fighting, but everything I’ve done outside of fighting as well. Working as an analyst on different networks and calling the WEC fights were great experiences. I couldn’t tell you who was running for president but I could tell you everything about every fighter on the undercard. This last year has been really tough for me. It’s been retirement and putting the sport behind me. I’m trying to unveil the new chapter in my life and when I sat down and peeled all those versions of myself away, the one thing I had in common with every version of myself was the UFC.”

“Right now, I don’t know what is going to fill that void,” Griffin added. “There is definitely something to fighting - the highs and lows, the emotional input and output - I don’t know any other way to recreate that. Doing a Masters Division in a grappling tournament is not going to satisfy my need for competition. I have a need for competition. I like it and I enjoy it. I like to push myself. It’s fun and that’s why I fought. Athletic or not, I was built for fighting.

“I’m still a little disappointed about my body quitting and not being able to compete. It makes you look back at all the things you did wrong, things you didn’t handle well, poor performances, etc. There are a lot of regrets and I would change a lot if I could. But if I had to choose between this happening or not happening in my life, I would certainly pick it happening. There were a lot of positives for sure. But you always want more.”