The elimination round of The Ultimate Fighter: Heavy Hitters is officially wrapped up, with the semifinal round matchups determined in the latest episode.

Before the semifinals were announced, there was still one more fight to go this week as Macy Chiasson, the top overall pick from the women’s featherweight division for Team Gastelum, looked to even the score for her squad when she faced Larissa Pacheco from Team Whittaker.

The ebb and flow this season has seen the momentum shift from Team Gastelum, who won the first three fights of the season, to Team Whittaker, which had four wins in a row going into this week’s bout.

Ahead of the fight, the athletes in the house dealt with some drama close to home thanks to a pair of incidents involving heavyweight semifinalist Maurice Greene, who has become increasingly belligerent all season long thanks to his excessive drinking after winning the first bout of the season.

Greene has enjoyed one long victory celebration after he punched his ticket to the next round of the tournament. Last week saw Greene involved in a verbal altercation with Juan Espino just days before his fight.

This time around, Greene managed to get under the skin of his own teammates, including Chiasson, who was struggling to get her rest amidst a very loud roommate staying up all hours and drinking until he couldn't drink anymore.

The second incident came up later with Greene playing pool alongside teammate Justin Frazier when some innocent jabbing back and forth got a little too serious after Team Whittaker fighter Anderson da Silva paid them a visit. Da Silva was already eliminated from the competition, but he held a previous win over Greene from a kickboxing fight and he had no problem reminding him of that fact. Da Silva then started to give Frazier grief that his punches weren’t all that powerful after he got locked under the Team Gastelum fighter for the majority of two rounds when they fought.

The entire situation escalated thanks to some drinks that Greene and Frazier were enjoying before da Silva paid them a visit. Cooler heads eventually prevailed but it's definitely another incident where a little too much drinking could have easily sent things overboard.

The simmering tension between Greene and some of the other fighters in the house has continued to ramp up all season long and eventually the pressure cooker could explode.

From there, it was time for the final opening round matchup to take place, with the women's featherweight division taking center stage again.

ROUND 1
Chiasson is very aggressive as the fight gets underway, throwing a head kick and then coming after Pacheco with her striking combinations. Pacheco does a good job avoiding damage and then pressing forward to close the distance and get the clinch against the cage. Pacheco tries to maintain her position, but Chiasson is able to work free and reset in the center. The striking combinations come fast and furious from Chiasson, but once again Pacheco is able to swim inside to get the clinch against the cage. Pacheco continuously works for a takedown while staying low on Chiasson's hips. She eventually works her way into position and gets the body lock takedown to bring Chiasson down to the mat. Pacheco works her ground-and-pound attack momentarily, but that allows Chiasson to scramble free to get back to her feet. Pacheco sees an opening for a guillotine choke as Chiasson then alters course for a takedown of her own. Chiasson slips free from the submission after bringing the fight back down to the mat. Working from the top, Chiasson is hammering away with big powerful shots, which forces Pacheco to roll momentarily as she almost gives up her back. Chiasson continues to pepper away with strikes until she flattens Pacheco out on the mat. Chiasson is relentless with her punches as the referee warns Pacheco to move or he's going to stop the fight. Chiasson continues her assault and Pacheco isn't able to wiggle free, which forces the referee to stop the contest before she takes any more damage. 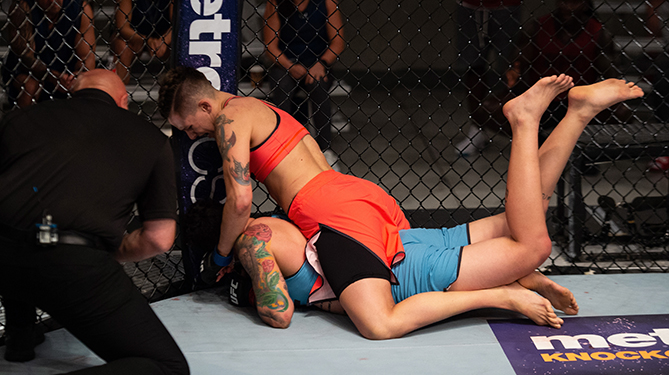 “I came in wanting to use my long and dynamic type of style," Chiasson said of her victory. "I knew that the No. 1 thing that girls try and do with me is take me against the cage and try and take me down. But going into this camp with Team Gastelum they have prepared me for literally every single aspect of the fight. I felt extremely comfortable going in there. Of course I was nervous, I mean fighting in The Ultimate Fighter is the biggest thing I have ever done. She has had 14 fights and I’ve only had two.

"I didn’t think it was going to be an easy fight at all. I knew when we got in there she was ready to throw and honestly that is one of my favorite things. If my opponent is down to throw I am down to throw."

The win by Chiasson evened up the score between the teams as well, with middleweight champion Robert Whittaker and top-ranked contender Kelvin Gastelum both putting four fighters into the semifinal round.

With the opening round concluded, it was time for UFC President Dana White to announce the semifinal matchups that will kick off with next week's episode. Here are the four remaining fights in order:

The action will kick off next week in a heavyweight showdown between former Olympic wrestler Michel Batista as he takes on dark horse competitor Justin Frazier with a spot in the finals on the line.

Can Batista showcase even more of his grappling skills or will Frazier continue to prove that he's an underdog ready to pull off the upset once again?

Tune in to The Ultimate Fighter: Heavy Hitters next Wednesday night at 10pm ET on FS1 to find out.