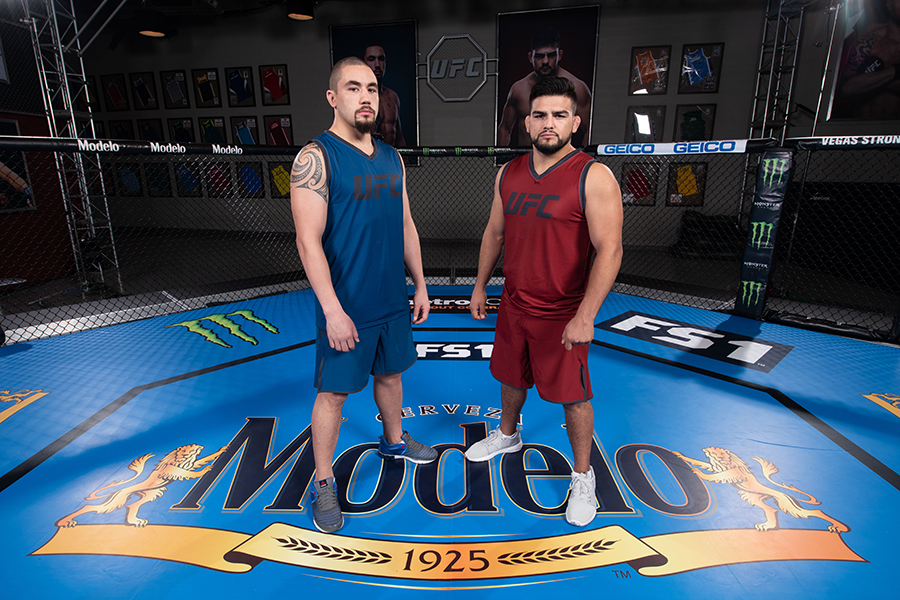 A rough start only seemed to make Team Whittaker better, as the reigning middleweight champion led his squad to a fourth straight victory in the latest episode of The Ultimate Fighter: Heavy Hitters.

The show returned on Wednesday night following a brief two-week hiatus, with the heavyweights taking center stage in the final matchup in the opening round for that division.
Team Whittaker sent Spanish grappler Juan Espino into battle against Team Gastelum's top overall heavyweight pick in Ben Sosoli.

Before the fight got started, the teams first had to deal with the aftermath of the previous contest, where Leah Letson earned a hard-fought two-round decision against Bea Malecki in the women's featherweight division. Letson returned home showing plenty of scars from the war she endured, with a pair of black eyes and a lot of swelling on her face, but it was all worth it as she got the job done for Team Whittaker.

The recent run by Team Whittaker definitely has top-ranked middleweight contender Kelvin Gastelum concerned going into the final heavyweight fight of the opening round. While Sosoli was his top overall selection in the heavyweight division, Gastelum knew he was facing a tough stylistic matchup with Espino, who comes from a wrestling background.

Sosoli came to the show from Australia where he once aspired to be a star rugby player, but after blowing out his knee, he was forced to give up the sport. That's when Sosoli went on the internet and sought out a new sport that didn't require as much running.

His choices were boxing or mixed martial arts and Sosoli decided to give MMA a try before falling in love with the sport. Of course, Sosoli later found out that MMA would require some running as well but, by then, there was no going back because he had found his new passion.

Sosoli fights to help provide for his girlfriend and two children who live at home with him in Melbourne, Sadly, Sosoli explained that he also has three more children who he hasn't seen in several years after becoming estranged from their mother.

As for Espino, he comes to the show with an impressive resume while training out of the Canary Islands in Spain. Espino has been fairly soft spoken all season long, although he did end up in a heated argument with Team Gastelum's Maurice Greene, who was very vocal about potentially facing him in the next round of the tournament.

Greene was rather belligerent while Espino was meditating before his fight, despite several members of Team Gastelum attempting to subside his behavior. Realizing the error of his ways, Greene eventually apologized to Espino and the two were able to shake hands as friends before the Spaniard prepared for his fight against Sosoli.

BEN SOSOLI VS. JUAN ESPINO
ROUND 1 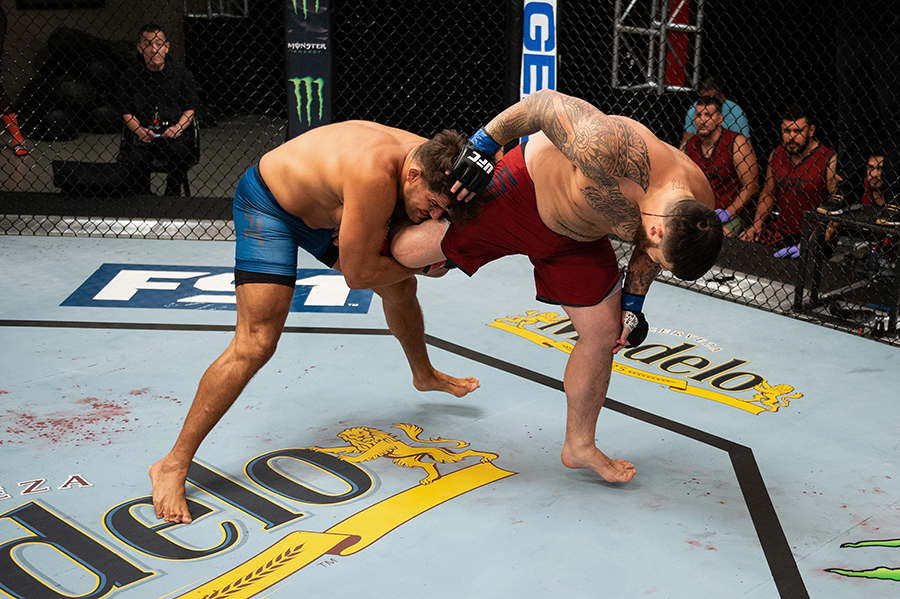 Sosoli is quick to set the pace with his punching power as he goes to the head and body with a couple hard shots with Espino circling away. Sosoli continues to flick out his jab to keep Espino at a distance. Espino finally gets inside those punches and works to take Sosoli down to the mat. Espino is able to drag Sosoli to the ground with a big takedown as he immediately begins working from the half-guard position. Espino is peppering away with short elbows and punches to the body, content to stay in the half-guard without Sosoli showing much of a ground game in defense. Espino continues to work from the top, maintaining his control. Espino doing a really good job of staying busy with his ground-and-pound attack, with Sosoli just trapped underneath him. Espino isn't doing a ton of damage but he's continuously hitting Sosoli with punches until he finally tries to move into mount with less than 30 seconds remaining in the round. Espino unleashes some hard shots from the top until Sosoli is able to roll out and get to his feet. It's a momentary bit of relief as Espino quickly latches onto his legs and brings Sosoli crashing back down to Earth just before the horn sounds to end the round. 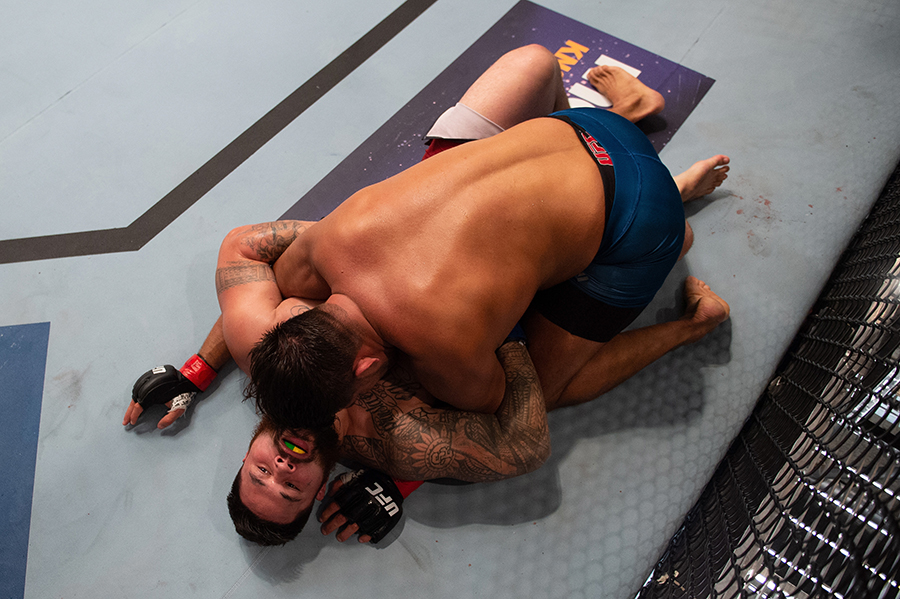 Sosoli starts landing some solid shots to open the second round while shaking off Espino's early takedown attempt. Sosoli cracks him with a solid one-two combination and it looks like his striking attack is finally starting to work. Unfortunately for Sosoli, it was short-lived success, as Espino tirelessly worked for that takedown attempt and got the New Zealand native back down to the ground. Espino was relentless with his ground attack as he trapped Sosoli against the cage and began hammering away with punches while pressuring him on the mat. Sosoli was finally able to work back to his feet for just a split second but Espino is quick to grab on to those legs and bring him down to the canvas yet again. Once again, Espino isn't doing a ton of damage but he's peppering away with enough shots that keep Sosoli grounded and prevents the referee from standing them up again. Sosoli is offering very little resistance, just holding on and hoping to force a stand up. Espino maintains his position from the top with more and more punches while just pushing Sosoli's head into the cage. With 30 seconds remaining, Sosoli was trapped and starting to run out of gas and time to stage a comeback. The pressure kept up until the final horn sounded, with Espino knowing he had done more than enough to get the job done. 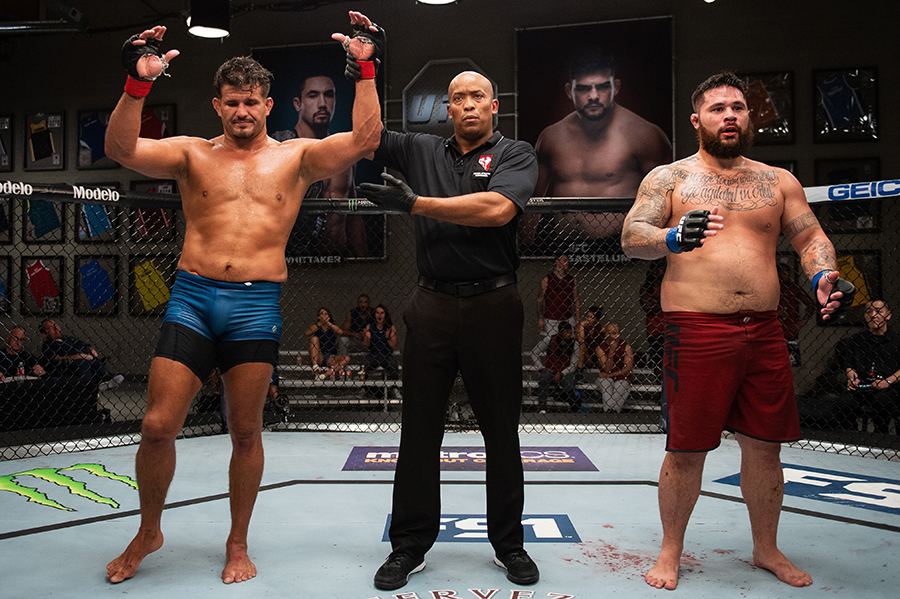 "My plan was to dominate the fight, through ground-and-pound," Espino said following the win. "Since Ben is a little guy, I knew if I took him down he would get up really fast. Ben is also really strong, so my whole plan was to control the tempo of the fight and keep everything at a slower pace and to ground and pound the s--- out of him.

"The situation of living in the TUF house is pretty complicated. You find your roommate and you become friends and on top of that I am fighting a guy I really like but I have to do this to fulfill my dream of being a UFC fighter. For other guys I have a different strategy. This was my strategy for the strongest fighter and striker. I will look at my next opponent and see what is the best."

With the win, Team Whittaker moves to 4-3 overall in the competition with one final fight set for next week to close out the opening round in the women's featherweight division.

Team Whittaker will send Larissa Pacheco against Macy Chiasson from Team Gastelum for the final spot in the semifinal round. After the fight is finished, the coaches will chat with UFC President Dana White and the semifinal matchups will be announced.

Don't miss any of the action when The Ultimate Fighter: Heavy Hitters returns next Wednesday night at 10pm ET on FS1.