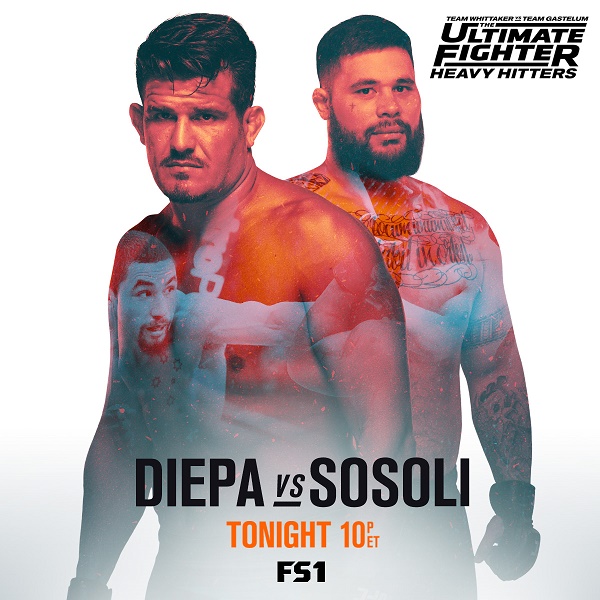 Following a two-week hiatus, The Ultimate Fighter: Heavy Hitters is back with the final preliminary round matchup in the heavyweight division as Team Whittaker looks to keep their recent momentum going while Team Gastelum tries to get back on track with a win.

The last episode of The Ultimate Fighter saw Leah Letson overcome a nasty cut and heavy offensive output from Bea Malecki to earn a unanimous decision win in the women's featherweight division.

Letson had been struggling with her team all season long due to a lack of attention she was receiving from her coaches as well as the training sessions not going as long or hard as she's used to having at home. Plus, Letson was struggling to communicate with many of her team members because not everybody was speaking English during their training sessions and it left her feeling like the outsider looking in.

Thankfully, by the end of her preparation for the fight, Letson was really able to turn the corner with the coaching staff and her teammates as they got her ready for battle. The end result was a back and forth war over two rounds but, ultimately, Letson got the job done with a unanimous decision against Malecki.

With that, the heavyweights are up to bat again this week for the final opening round matchup, as Team Whittaker's Juan Espino takes on Ben Sosoli from Team Gastelum.

Sosoli came to the show as a native of New Zealand who now resides in Australia, and he previously spent his sporting days playing rugby. Eventually, Sosoli found a new passion for mixed martial arts when his rugby playing days came to an end and he's been fighting ever since.

When the show first started, Sosoli was honest in his desire to end up on middleweight champion Robert Whittaker's team as a fellow fighter coming out of Australia. As the team selections were made, Sosoli ended up as part of Kelvin Gastelum's squad but he's definitely made the most out of the situation and has been bonding with his teammates all season long.

Back home in Australia, Sosoli is a dad to five kids and keeps a very active schedule between work and training. Sosoli comes to the show with a 6-2 record, including three victories in a row.

Sosoli is best known for his heavy hands, as he's earned five of his six wins by knockout, and he's never been finished during his career. While he prefers to strike with his opponents, Sosoli works at the same gym as recently retired UFC middleweight Daniel Kelly, who is a multi-time Olympic judoka from Australia. Kelly understands the art of the takedown and submissions, so he's certainly passed along some of that knowledge to Sosoli to get him ready for this competition.

Meanwhile, Juan Espino will represent Team Whittaker this week as he looks to get a fourth straight win for the middleweight champion.

Espino hails from the Canary Islands in Spain and he's one of the elder statesmen in the house at 38 years of age. Espino carries an 8-1 record in his career with six straight victories, including four finishes.

On paper, this looks like the classic “striker versus grappler” matchup, with Sosoli undoubtedly gunning for the knockout while Espino will likely try to drag this one to the floor where he can control the action with his wrestling. Obviously, both fighters are heavyweights, which means Espino can't be counted out on his feet, just like Sosoli shouldn't be underestimated if he hits the ground and lands on top.

Wrestlers have traditionally fared very well on The Ultimate Fighter, which was witnessed just a few weeks ago when former Cuban Olympian Michel Batista took care of Josh Parisian in less than two rounds. Espino's grappling background could be a problem for anybody in the house, and even Gastelum will express some concerns about his wrestling ahead of the showdown with Sosoli, who was his top pick in the heavyweight division.

With the final slot in the semifinal round up for grabs in the heavyweight division, Sosoli and Espino will do everything possible to get the job done in this marquee matchup between Team Whittaker and Team Gastelum.

Away from the fight this week there will also be some drama between Espino and Maurice Greene, who hails from Team Gastelum.

The tension between these two heavyweights has already been felt in the past, as Greene has been one of the louder and more vocal fighters in the house while Espino has largely kept to himself. Greene earned a vicious first-round knockout in the opening fight of the season, so he's had a little bit of down time since competing and he has no problem getting under the skin of any of his future opponents.

This week will see Greene and Espino at odds just days before the Spanish heavyweight is about to step into the Octagon to do battle with another Team Gastelum fighter.

If Espino is successful in his attempt to move on to the semifinals, it will be interesting to see if he gets matched up with Greene considering the tension felt between them all season long.

But first things first. Espino has to get past Sosoli this week before he can even fathom a matchup with Greene down the road.

Can Team Whittaker keep this winning streak alive with the heavyweights this week or will Team Gastelum turn things around with top pick Ben Sosoli? Tune in to the new episode of The Ultimate Fighter: Heavy Hitters tonight at 10pm ET on FS1 to find out.