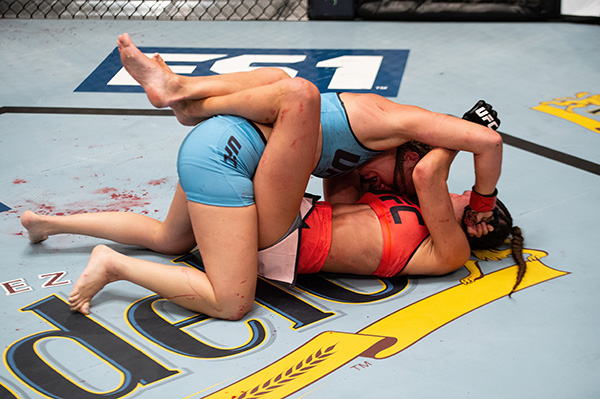 Team Whittaker is on a roll after their third victory in a row on the latest episode of The Ultimate Fighter: Heavy Hitters.

Before the fight got started, Letson was still contemplating a move to Team Gastelum after weeks upon weeks of issues not being happy with what's happening over on Team Whittaker.

All season long, Letson has complained that she's not being pushed as hard as she likes in training and the language barrier between her, the rest of the team, and even some of the coaches, has made her feel somewhat isolated while trying to stay ready when her name was called.

The good news was that this week saw a bit of a transformation in Letson's relationship with Whittaker and his coaching staff, as they were able to turn their full attention on her with the fight coming up. Letson was able to get in her hard sparring rounds while learning some tips from Whittaker, who is one of the best pound-for-pound fighters in the sport right now.

As for Malecki, she was out to prove to everybody that she's more than just a pretty face.
In a different life, Malecki might have been a model instead of a fighter, but she puts in a lot of hard work in the gym and she really wanted to prove she belongs while competing this season.

Elsewhere ahead of the fight, top-ranked middleweight title contender Kelvin Gastelum continued to bring in new people to work with his team. This time around, Gastelum invited his fellow Ultimate Fighter finalist Uriah Hall to serve as a guest coach.

Gastelum earned his UFC contract by defeating Hall back in the season 17, but afterwards they became good friends and even began training with each other at times. Hall is a multi-fight UFC veteran with a long string of wins, including a knockout against Gegard Mousasi. Best known for his striking skills, Hall displayed some of those moves when helping the fighters from Team Gastelum to learn a few things from his visit.

From there, it was time for the fight, as Letson and Malecki battled it out for a spot in the semifinals in the women's featherweight division. 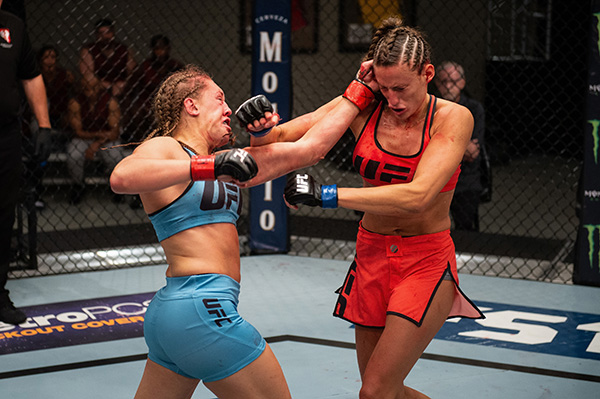 Both fighters come storming to the middle of the Octagon, with Malecki looking for a kick down the middle while Letson is throwing punches in bunches. Malecki backs up and she ends up throwing bombs with Letson in a furious exchange. When Malecki seems to start landing with more accuracy, Letson finally pushes forward and engages in the clinch against the cage while working her dirty boxing attack. Letson continues to push for the takedown, but she's reversed as Malecki works her way free and then gets back to the feet before resetting in the center of the cage. Malecki is trying to use her long reach with straight punches and a knee that comes up the middle to catch Letson in the midsection. Malecki is still using her reach, but Letson is able to fire back with some solid counters that land flush on the chin. Letson is throwing with better volume and combinations while Malecki is typically hitting her with one strike and then resetting again. Letson eventually pressures forward, getting the clinch again as she attempts to take the fight down to the ground. Malecki is warned twice for grabbing the fence as she tries to stop Letson from bringing her to the mat. Letson has a big cut opened up over her forehead from one of the elbows she ate from Malecki during one of the fiery exchanges, but she's not even paying attention to the blood streaming down her face. Instead, Letson finds an opening to finally bring Malecki crashing down to the ground where she begins to ply her grappling game. Malecki is able to play defense well enough to stay out of too much trouble before working her way back to the feet.

ROUND 2
Malecki tries to keep her distance with a couple early kicks that tag Letson to the body and legs. Letson counters with a boxing attack while throwing a couple of kicks of her own to Malecki's lead leg. Both fighters are very flat footed while standing in front of each other, looking for the better striking combinations. Malecki starts to land the better shots and that leads to Letson again going for the takedown. Malecki is able to slip out of the takedown attempt and move to take Letson's back against the cage. Letson is standing but Malecki is on her back attempting to get the rear naked choke. Letson finally turns around to work out of the submission before grabbing one of Malecki's legs and bringing her crashing down to the canvas. This time, Letson is inside Malecki's full guard so she's maintaining control while peppering away with short punches to the body and head. Malecki tries for a half-hearted triangle choke, but Letson easily slips free. Letson continues to tag Malecki with those short punches to the body and then moves to the head before finally advancing to half guard. Malecki tries to explode off the bottom and get out from under Letson, but she can't seem to find an opening. Every time the referee warns Letson to stay busy, she responds by upping the pressure on Malecki with more ground-and-pound. When the final horn sounds, Letson was still on top raining down punches as the judges rendered their decision after two rounds.

“She followed the game plan," Whittaker said about Letson's performance. "Get the takedown and control on top. That was it. I think we could have done range finding and distance a little better, but it is a work in progress. Still happy to get the win.”

The win puts Letson into the next round of the tournament while notching Team Whittaker three wins in a row.

The next fight of the season will shift back to the heavyweights, as Team Gastelum fighter Ben Sosoli will take on Team Whittaker's Juan Francisco Espino Diepa.

Don't miss a minute of the action when The Ultimate Fighter: Heavy Hitters returns next Wednesday night at 10 pm ET on FS1. 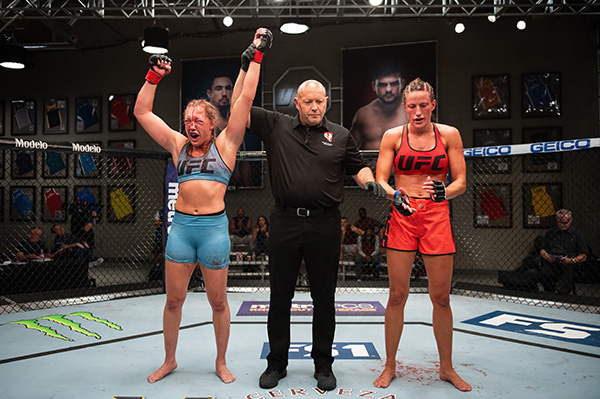