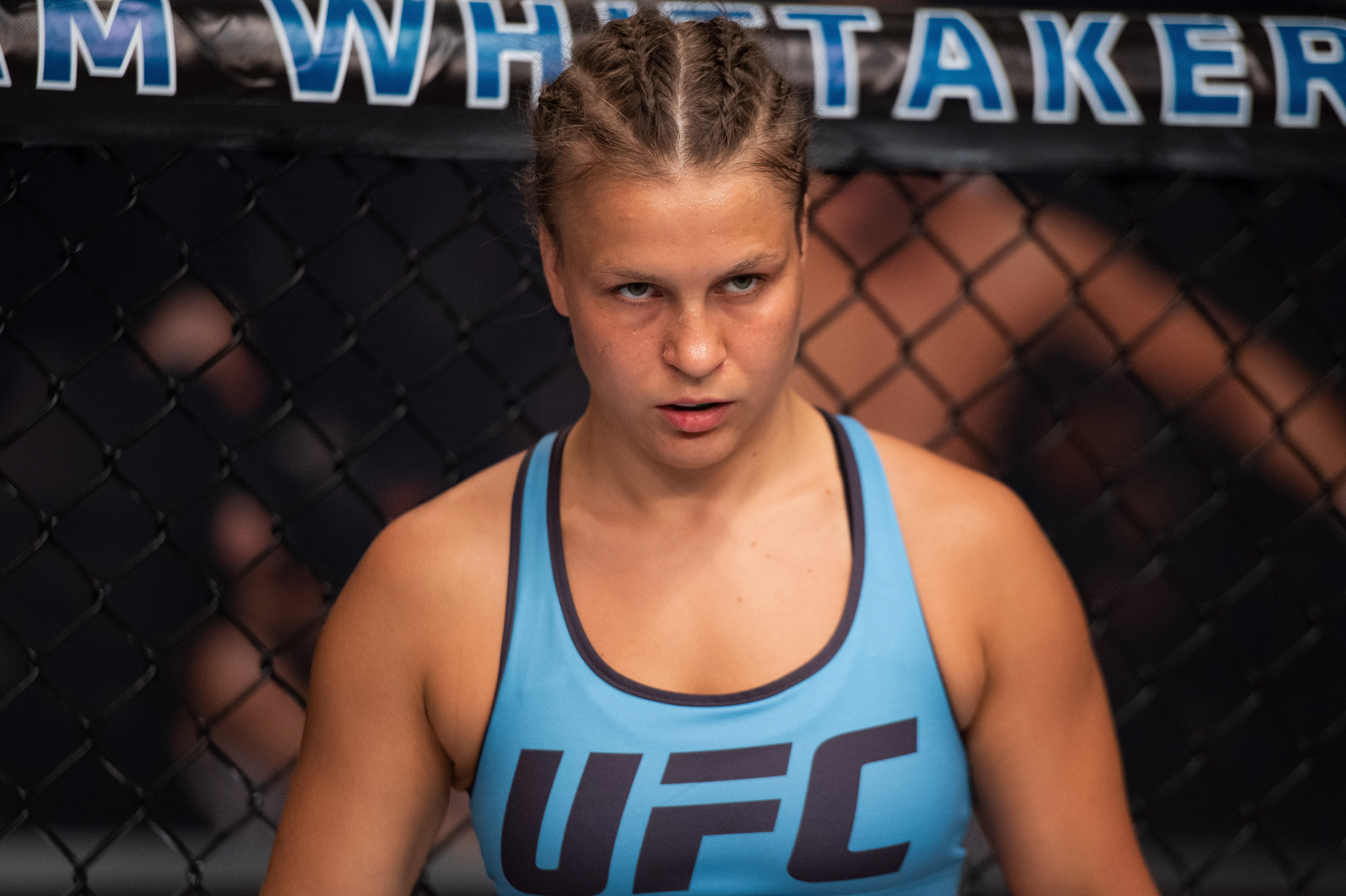 The Ultimate Fighter: Heavy Hitters on JULY 19, 2018 in Las Vegas, Nevada. (Photo by Chris Unger/Zuffa LLC via Getty Images)" align="center" />The fourth fight of The Ultimate Fighter: Heavy Hitters was definitely the most action packed, back and forth affair of the season.
The women's featherweights were up to bat again this week as Team Whittaker's No. 1 overall pick from the division - Julija Stoliarenko - took on Team Gastelum's last pick, Marciea Allen.
Last week, middleweight champion Robert Whittaker tried that same approach with his fight selection, but it backfired when his No. 1 overall selection Anderson da Silva was eliminated in a fight against Justin Frazier. Whittaker tried again this week by putting Stoliarenko against Allen with hopes of getting his team their first win of the season.
Stoliarenko came to the show from Lithuania, where she believes she might be the only women's mixed martial artist from her tiny home country. While she's already made her way to The Ultimate Fighter, Stoliarenko only started her journey into mixed martial arts back in 2015.
Now she comes to the show with a 4-2 record with all four of her wins coming by way of armbar submission.
Meanwhile, Allen trains out of Illinois, where she's a successful business owner alongside her girlfriend, as they run an all-women's fitness academy just outside of Chicago. Allen was previously a basketball player before discovering a passion for combat sports, but she actually gave up fighting while focusing on opening her business. 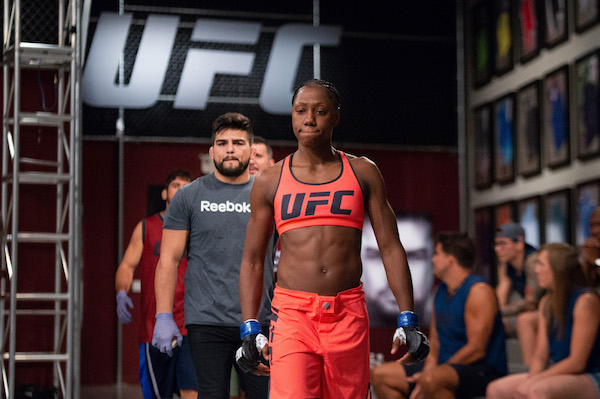 For two years, Allen was away from the sport while getting her gym up and running, but she finally decided to go back into MMA and make every effort to turn her dream into a career. While her girlfriend keeps a watchful eye over their business, Allen has been able to focus on her fighting and she hoped to show off the fruits of her labor on the show this season.
In other action this week, Leah Letson continued to struggle to deal with her teammates and coaches due to a language barrier that keeps haunting her at every turn. If that wasn't bad enough, Letson doesn't particularly like the way that Whittaker runs practices, where he's put an emphasis on keeping his fighters healthy rather than pushing them harder in the gym before they fight.
Letson argued that she's losing out on valuable training time by not getting any sparring sessions, much less pushing her conditioning with those hard training sessions she typically gets at home. The end result was Letson training more at the house while hoping to find a way to bridge the gap with her teammates as she prepares to fight soon.
Over on Team Gastelum, the top-ranked middleweight contender brings in some of his coaches to help the team. While that was a nice surprise for the athletes, it was Gastelum who got the biggest shock of all when his Brazilian jiu-jitsu coach Brian Beaumont presents him with his black belt 10 years after they first started training together.
Gastelum was definitely taken aback by the gesture as he earned his black belt just months away from competing for his first UFC title when he faces Whittaker in 2019.
Once that was all wrapped up, it was time for the fight, as Stoliarenko challenged Allen in a barnburner matchup in the women's featherweight division.
JULIJA STOLIARENKO VS. MARCIEA ALLEN
ROUND 1
The fighters exchange strikes almost immediately, with Stoliarenko looking for kicks to the legs and body while Allen is looking for punching combinations. Stoliarenko rushes forward for a takedown attempt, but Allen sprawls out and reverses the position. Allen ends up on top and she starts raining down some heavy punches that has the referee ordering Stoliarenko to do something or he will stop the fight. Allen is crushing her with repeated punches and hammerfists from the top. Stoliarenko’s nose is bloodied as she continues to shift her body in an attempt to fight back from the immense damage she’s eating on the bottom. Allen gets a little reckless with her striking as she continues to throw huge shots, with every punch coming down at Stoliarenko.
Finally, Stoliarenko is able to work her way back to the feet as she tries to recover after enduring some serious punishment through the first two minutes. Stoliarenko rushes forward with another takedown attempt but this time she's able to put Allen on the ground while landing in half-guard. Stoliarenko begins eating away at Allen with shots to the body and then going up to the head. Allen is doing her best to defend from the bottom but she's struggling to stop Stoliarenko from advancing her position. Stoliarenko works her way to side control and then into the mount while setting up her signature armbar submission. Gastelum can be heard from the corner warning his fighter about the submission but Stoliarenko is too quick to stop and she latches onto the arm before falling back to the ground. Allen tries her best to get free but Stoliarenko is able to extend the submission before finally getting the tap towards the end of an action packed first round. 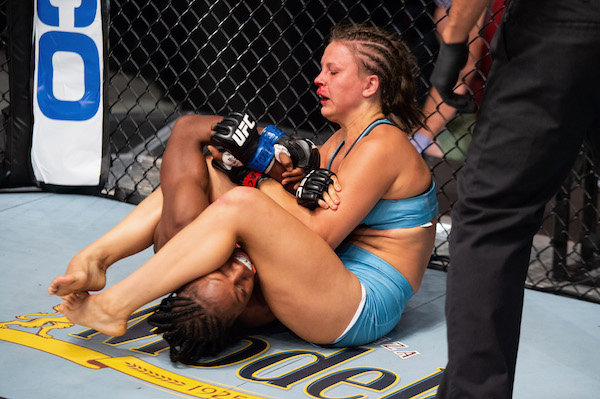 Official result: Julija Stoliarenko def. Marciea Allen by submission (armbar), Round 1
“I wanted to strike with her first and then get enough angles to take her down and submit her on the ground, but I have heard from her other opponents that she is going to aggressively attack in on the first few seconds, so I am going to shoot for her straight," Stoliarenko explained after her victory. "She actually defended pretty well from my first shot and instead of standing up I was too lazy and I just tried to play from the ground.
"I stood up and got her to the ground and eliminated her."
The win puts Team Whittaker on the board for the first time this season, but now the fight selection goes back to Gastelum, who picked the next heavyweight fight for the following week.
Team Gastelum and Dana White Tuesday Night Contender Series veteran Josh Parisian will take on former Cuban Olympic wrestler turned mixed martial arts hopeful Michel Batista in a battle of heavyweights.
Who will punch their ticket into the next round of the tournament? Tune into The Ultimate Fighter: Heavy Hitters next Wednesday night on FS1 to find out.