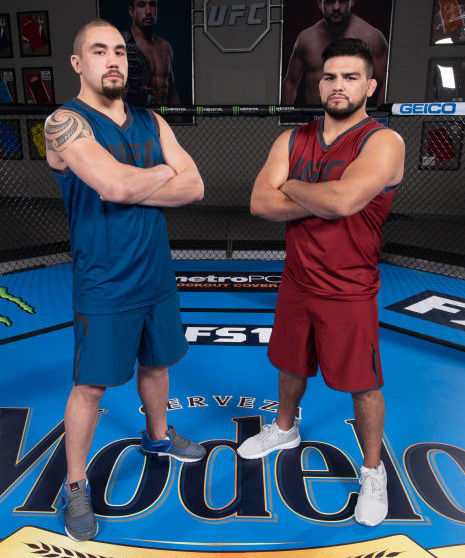 It's been a rough start to the TUF Heavy Hitters competition for Team Whittaker after losing the first three fights of the season, including bouts in both the men's heavyweight division and the women's featherweight division.

The latest setback may have been one of the most painful to experience, as middleweight champion Robert Whittaker put his No. 1 pick Anderson da Silva against Justin Frazier in a fight that was supposed to showcase his top heavyweight against arguably one of the weaker links on Team Gastelum.

Frazier ended up surprising everybody with a durable gas tank during the fight after experiencing serious conditioning issues throughout the entire show, and he ultimately used a heavy ground attack to stifle da Silva's potent striking arsenal. With the win, Frazier moved forward in the competition while Whittaker had to say goodbye to his top pick.

This week will see Whittaker try again, with another No. 1 selection going up against one of Kelvin Gastelum's final picks, with Lithuanian submission specialist Julija Stoliarenko taking on Marciea Allen.

Stoliarenko definitely impressed Whittaker during the initial workouts, when the coaches were able to evaluate the fighters on their overall skill sets. Whittaker ended up taking her as his No. 1 featherweight, and she will try to live up to that honor with her performance this week.

"For me, fighting is always for the finish." Meet featherweight Julija Stoliarenko. pic.twitter.com/rD1iFAvqcn
— The Ultimate Fighter (@UltimateFighter) September 18, 2018

Stoliarenko comes to the show touting that she's the only women's mixed martial artist from her native Lithuania to make it this far in the sport. She definitely endured some growing pains when she first started out in her career, going 1-2-1 through her first four fights.

Since that time, Stoliarenko has found some stability in her career with three straight wins while she's proved to be something of a specialist, with all of her victories coming by way of armbar. In fact, Stoliarenko's last two fights have been blistering fast finishes as she's submitted her opponents by armbar less than a minute into the first round each time.

That means Stoliarenko definitely won't mind taking this fight to the ground, and that's probably where she'll prefer to put Allen as the Team Gastelum featherweight comes into the contest with an impressive overall skill set but definitely shows off some dangerous striking.
On paper, Allen might have been the more appealing top pick based on her resume and experience when compared to Stoliarenko.

Allen was already fighting in Invicta Fighting Championships very early in her career, and she's faced a long list of tough opponents. Her second pro fight came against former Ultimate Fighter and UFC veteran Jessamyn Duke, while she holds wins over the likes of Carina Damm and Jan Finney, who are both long time veterans in women's mixed martial arts.

She also trains under a well-respected coach named Mike Valle, who grew up learning under Greg Jackson and Mike Winkeljohn. Valle has worked with numerous UFC athletes in the past, including a pair of Ultimate Fighter winners and top 15 ranked fighters in Julianna Pena and Yair Rodriguez.

Now in terms of matchup, Allen actually has more submission wins than she does knockouts, but considering Stoliarenko's specialty on the ground, she might want to avoid a grappling battle in this fight. Allen will possess a whopping seven-inch reach advantage over Stoliarenko, so that could definitely come into play if these two fighters start trading shots.

Considering the resume she possesses, Allen might just be one of the best dark horses in the competition this season.

Elsewhere this week — Leah Letson will continue to struggle under her current coaching situation, as she is the only American member of Team Whittaker.

While international competitors are nothing new to The Ultimate Fighter, only in recent years has the language barrier between some athletes and their teammates ever become an issue. Hiromasa Ogikubo famously couldn't speak any English when he arrived at The Ultimate Fighter season 24, but he found a way to communicate with head coach Joseph Benavidez just through the motions of fighting.

Unfortunately, it seems that Letson isn't having nearly as much luck after she experienced some problems communicating with her teammates last week, and that will only continue into her training in the new episode.

Letson is considered one of the best featherweight prospects on the show this season, but struggling to communicate with her teammates and coaches certainly won't do her any favors as she awaits the call for her first fight. Letson obviously has a great team around her, but with most of the fighters and even some of the coaches speaking primarily Spanish or Portuguese, it's going to give her some problems during those sessions.

It's safe to say that problems with one teammate can quickly spiral out to create tension amongst everybody working on Team Whittaker, so it will be interesting to see how Letson handles her situation this week and beyond.

This week will also bring some special training for Team Gastelum, as the top ranked middleweight contender will bring in some of the coaches who have been with him throughout his entire career to help the fighters. Once upon a time, Gastelum was the last pick on his season of The Ultimate Fighter, so he definitely knows what it takes to overcome those odds, and bringing in the coaches that helped him get there might be the perfect inspiration for Allen this week.

Once it's all said and done, it will be time for the next fight in the women's featherweight division as Stoliarenko attempts to put Team Whittaker on the board for the first time while Allen hopes to keep Team Gastelum rolling with their fourth straight win.

Don't miss a minute of the action as The Ultimate Fighter: Heavy Hitters returns tonight at 10pm ET on FS1.