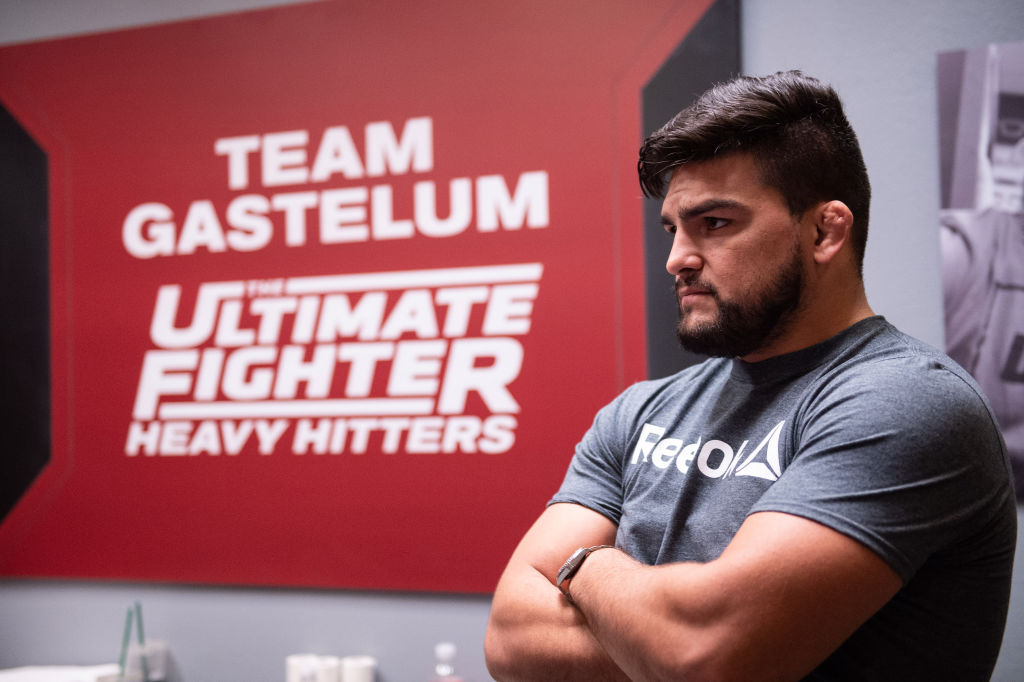 It's been all Team Gastelum thus far on The Ultimate Fighter: Heavy Hitters, as the middleweight contender's latest win took place in the women's featherweight division last week.

Pannie Kianzad bested Team Whittaker fighter Katharina Lehner in the first women's fight at 145 pounds to punch her ticket to the next round of the women's featherweight tournament while putting her team up 2-0 in the competition.

Tonight’s episode will feature the second heavyweight fight of the season as selected by middleweight champion Robert Whittaker. With his team taking two losses already, he decides to turn to his biggest gun as former kickboxer turned mixed martial artist - and his No. 1 overall pick - Anderson Da Silva is in action this week against Team Gastelum's Justin Frazier.

Of course, Frazier already came under the spotlight for all the wrong reasons a week ago when his struggles with conditioning were highlighted during the episode.

Frazier came to the show over the 265-pound weight limit for heavyweights and admitted that he probably wasn't in the necessary shape he needed to be in when this competition got started. The mistakes he made leading up to the show hurt him during team evaluations and the result was being the last pick out of the heavyweight fighters competing this season.

"When I get ahold of somebody...I just inflict my will." Meet Heavyweight Justin Frazier. pic.twitter.com/wntiWMEYn5
— The Ultimate Fighter (@UltimateFighter) September 11, 2018

Frazier's struggles continued last week as he was visibly gassed after a hard sparring session with one of his teammates, and that will only hurt him going forward as he has now been called on to fight next.

On paper, Frazier should have the advantage just based on mixed martial arts experience alone. With a 10-2 record, Frazier has faced some fierce competition while fighting on the regional circuit in the United States.

He's actually faced current top five-ranked heavyweight contender Derrick Lewis and was scheduled at one point to take on Curtis Blaydes as well, but that fight didn't end up taking place. Frazier has earned finishes in all 10 of his victories, with eight coming by way of knockout and two more by submission.

Frazier trains out of Arkansas, which is the same state responsible for recent Ultimate Fighter veteran Bryce Mitchell, who joined the UFC roster just recently.

When he's not training, Frazier runs a local car mechanic shop while raising two kids alongside his wife. Frazier admits he's never been able to put his focus on fighting full-time so this six-week experience on the show could be invaluable to his growth in the sport.

Unfortunately, his lessons will be short this week, as he has to get ready in quick order to take on Whittaker's top pick in the next heavyweight fight.

Da Silva comes to the UFC with a wealth of experience in kickboxing, where he regularly competed in GLORY and was previously ranked amongst the best heavyweights in the entire sport. Da Silva, who hails from Sao Paulo, Brazil, typically goes by his name Anderson 'Braddock' thanks to his name sounding a lot like the longest reigning UFC middleweight champion in history.

In kickboxing, Da Silva is a ferocious fighter with massive power in his punches and kicks. He even put on a blistering performance against current roommate Maurice Greene when they met in GLORY back in 2016. Da Silva legitimately might be the most dangerous striker out of anybody on the show, but it's also obvious that his power is in the feet, so it will be interesting to see how he does if opponents are looking to take him to the ground.

Da Silva is still very young in his MMA career, so this will surely be a test to find out if he's really ready for the big show when he competes this season. He's already impressed Whittaker enough to make him the top heavyweight pick for the season, so obviously the middleweight king sees something special in Da Silva.

Away from the fight this week, there's an interesting situation brewing in the house amongst the competitors on Team Whittaker and Team Gastelum that has nothing to do with the tournament.

The international flavor on this season of The Ultimate Fighter is quite diverse, with athletes coming from all over Europe, as well as Brazil and even Cuba. While that shows the true power of MMA on a global scale, it also makes for some difficult communication between some of the fighters.

Only 2 years in, but it would be foolish to underestimate this heavyweight, meet Anderson Da Silva. pic.twitter.com/SwNbLKIbU1
— The Ultimate Fighter (@UltimateFighter) September 11, 2018

In particular, there's one fighter from Team Whittaker who is struggling to talk to their teammates thanks to the wide range of languages being spoken throughout the house.
Back in season 24, Joseph Benavidez faced that same problem while coaching flyweight competitor Hiromasa Ogikubo, who came into the house without speaking any English at all. While it was a challenge, Benavidez was able to overcome the language barrier to teach Ogikubo throughout the tournament without them actually saying much to each other.

It will be interesting to see if the fighters on Team Whittaker can figure out a similar situation as they attempt to bounce back from two straight losses while sending their top pick into battle this week.

Everything will lead to the heavyweight fight as Da Silva looks to live up to his billing as the best striker in the house while taking on underdog Justin Frazier, who looks to get past his conditioning issues to pull off the upset.

Don't miss a minute of the action when The Ultimate Fighter: Heavy Hitters returns this tonight at 10pm ET on FS1.