The biggest competitors in both the men’s and women's divisions will be represented when The Ultimate Fighter: Heavy Hitters kicks off this Wednesday night on FS1.

This will be the first time in history that the women's featherweight division will be featured after the weight class was added to the UFC less than two years ago.

Of course, the women's featherweight division is ruled by 145-pound queen Cris Cyborg, who is regarded as one of the best fighters in the world regardless of weight class or gender. Cyborg has been wrecking anybody and everybody who stands in her way while going undefeated for more than a decade.

This latest group of UFC hopefuls will attempt to not only earn a contract, but at least a few of them have to believe they could one day challenge a champion as dominant as Cyborg inside the Octagon.

On the men's side, the heavyweights will appear on The Ultimate Fighter for only the third time in the 28 season run of the show. This will be the first time heavyweights have appeared since season 10 in 2009.

Perhaps the best part about the heavyweights joining the show this season is the unpredictability that comes along with this weight class. Because heavyweights can range anywhere from 206 pounds all the way up to 265 pounds, the range in size of some of these fighters will be quite noticeable throughout the season.

Back in The Ultimate Fighter season 2, the eventual heavyweight winner was a guy named Rashad Evans, who probably doesn't look anywhere near the stature compared to some former champions from the division like Stipe Miocic or Brock Lesnar. That didn't stop Evans from showcasing his skill set and becoming the champion of his season of the show before he eventually dropped down to light heavyweight and became a UFC champion.

Season 10 had an equally diverse bunch of heavyweights, with a mix of veterans and relative newcomers, and it ended up being one of the most enjoyable season in the history of the show.
So the bar has been set relatively high for the heavyweights competing on the show this season, as all eight of them look to make an impact during the tournament.

The coaches this season will have plenty of experience to pass along to the fighters, as middleweight champion Robert Whittaker and top five ranked contender Kelvin Gastelum will lead the way this season.

Whittaker participated in TUF: The Smashes, where he represented Australia in the competition before winning the entire tournament. While Whittaker found success after the show, he really came into his own after deciding to move from welterweight up to middleweight. Now Whittaker is the best in the world at 185 pounds while remaining undefeated in the division in the UFC.

Meanwhile, Gastelum was part of The Ultimate Fighter season 17, where he was coached by former title challenger Chael Sonnen. Gastelum had the unfortunate honor of being the last pick during his season of the show, but he quickly proved any doubters wrong by mauling the competition during every fight. Gastelum eventually won the show with a victory against highly touted striker Uriah Hall.

Now much like Whittaker, Gastelum has found a home at middleweight after competing for much of his career at 170 pounds. Gastelum has looked better than ever in recent years while picking up back-to-back wins against former champion Michael Bisping and top ranked contender Ronaldo "Jacare" Souza.

Gastelum will look to pass along some of the knowledge he's learned over the years to the fighters hoping to join him on the UFC roster this season.

The first episode of the show will introduce the 16 fighters representing the heavyweights and women's featherweights this season, and it’s a very diverse cast of characters.

This might just be the season with the most international flavor, with a range of athletes hailing from all over the world. There are fighters from Sweden, Germany, Poland, Brazil, Lithuania and even Australia. 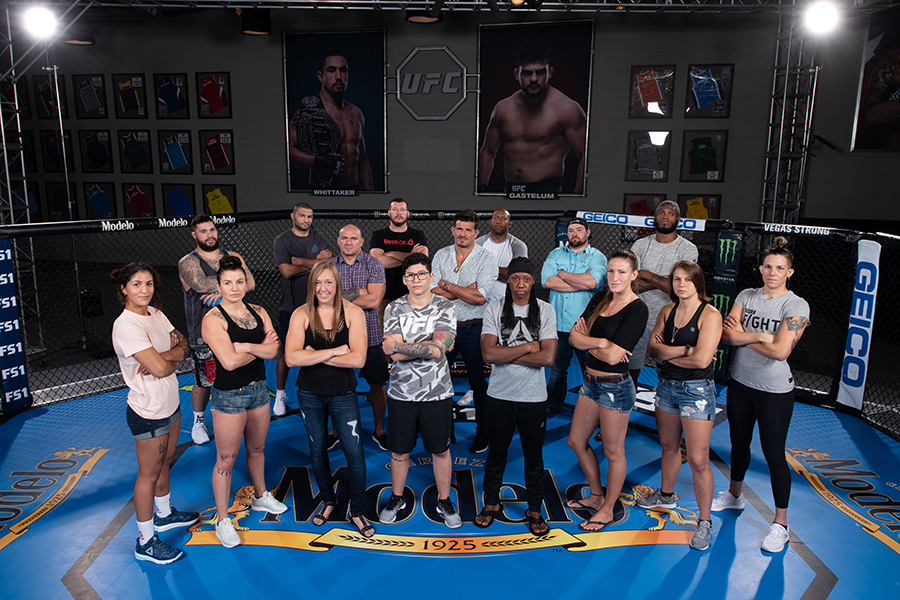 Once the fighters are introduced this week, it will be time for the customary evaluations from the coaches, who will then decide on who they want to pick for the team selections.

Every coach throughout the long history of this show has adapted their own style for what they want out of their athletes and what they expect to show them over the course of six weeks. Some coaches are very hands-on, like current double champ Daniel Cormier, who has been a coach his entire life and really digs in with his fighters in every facet of training to strategy and then working in the corner as well.

Other coaches are a little more hands off while working with the belief that the fighters who are on the show this season should know what it means to be professional and they should have arrived already prepared to compete. The idea for some coaches is that they aren't going to try to reinvent the wheel with anybody on their team, and instead they will focus on keeping them sharp and ready for competition.

It will be interesting to see what kind of approach Whitaker and Gastelum take after they both had experience on the show previously.

Once the evaluations and team selections are completed, then it will be time for the first fight of the season as things get moving in rapid-fire fashion.

Don't miss a minute of the action as it all unfolds when The Ultimate Fighter: Heavy Hitters debuts on FS1 tonight at 10 pm ET.