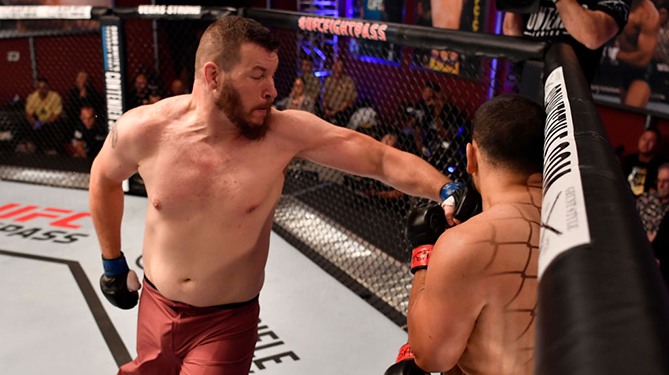 My name is Josh Parisian, my record is 7-2, I’m 29 years old, and fighting out of Scorpion Fighting System in Brighton, Michigan.

Although I fight out of Brighton, I’m from a small town in the Upper Peninsula of Michigan, called Escanaba. I moved there from Martinsburg, West Virginia right before 2nd grade, and then lived there for the better part of 16 years. I’m very proud of where I’m from, I absolutely love my hometown, and every fight I’ve ever had, I requested to be announced that I’m fighting from Escanaba.

I got into fighting to build confidence. I had a very poor outlook on life and myself, due to a physically and, even more so, a mentally abusive stepfather. I had changed schools five times, been in abuse shelters, and spent the better part of my childhood in fear.

I have come a long way since then and have not allowed my past to dictate my future and I don’t use anything I’ve been through as an excuse for myself. My reasons for fighting are ever changing as I grow as a martial artist and as a person, but one reason that’s always stuck with me is being a living breathing example for others; that it doesn’t matter what you’ve had happen in your life, you can do anything and you can have anything, as long as you work hard for it.

Since I’ve started my journey in martial arts, I have always set small goals for myself and I’ve managed to accomplish all of them. Not because of luck or because I’ve been blessed with any sort of exceptional athletic abilities, but because of persistence and a belief in myself.

Fast forwarding to the major events that got me to where I am now, I received a call from UFC matchmaker, Mick Maynard, letting me know that it was decided that I was an alternate for the show, but in the same conversation asked if I’d be willing to step up last minute for a fight on the Dana White’s Tuesday Night Contender Series. I asked, “What’s the date of the fight?” “Tuesday,” Mick replied. “This Tuesday?!” I laughingly responded, almost as if there is someone in the universe out there just plotting against me.

Mick gave me one hour to make a decision, which added to my rollercoaster day, as I was still in the office and already on a time crunch to get my weekly quality metrics document out to a client. I wanted the fight, I hadn’t even looked the opponent up yet, but it didn’t matter. I had been working day in and day out for eight years with many sacrifices and not one single break. So, when you finally get that one phone call that can make the dream you’ve been working for finally become a reality, your answer had better be yes.

That being said, I did not give my answer right away, as I felt I needed to show respect to my manager and my coach to make sure I had their approval. Mick had already told me he tried to contact my manager, Daniel Rubenstein, several times, but couldn’t reach him, as he was in Singapore for UFC Fight Night and it was 3:30am there. I tried to call him anyway, but had no luck.

Then for the next 55 minutes, I called my coach, James Gray, over and over, without him ever picking up. Which was kind of irritating at the time, because he’s always on his phone, until I really need him to answer, of course. He finally answered with five minutes to spare. He didn’t answer his phone because he said he in the movie theater watching Jurassic Park. James said, “Yes, let’s take it.” I called Mick back and told him that we wanted it. He told me someone would be getting hold of me to get me on an airplane that night or early the next day.

I won my fight on the Contender Series by knockout in the first round, in a manner that one would think would definitely be advantageous to gaining a UFC contract. Dana then announced that I didn’t get a contract, but rather a guaranteed spot on The Ultimate Fighter.

Upon hearing the news, I was definitely discouraged, as I felt what I did was enough, historically speaking, to gain a contact. Dana brought me into one of his offices and explained to me why he made the decision that he did and how it’s going to be favorable to me. He told me that on the last day, when we all go out on the town, that I would be grateful that he made the decision that he did. I was definitely feeling much better about the situation and looking forward to competing on the show after that.