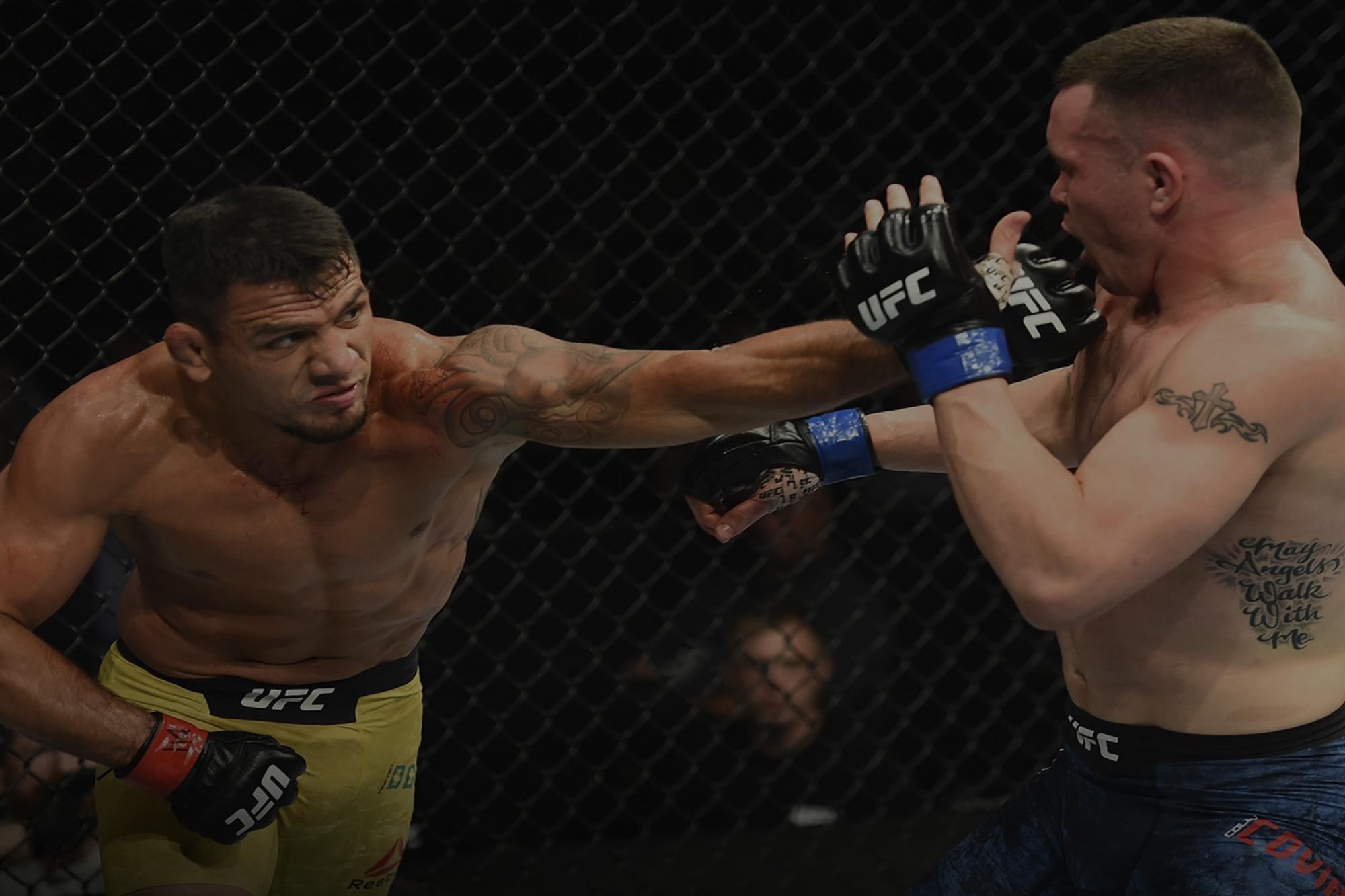 RAFAEL DOS ANJOS VS. KAMARU USMAN
Rafael Dos Anjos will look to get back into the title race following a hard-fought loss in his bid to become interim champion when he takes on surging welterweight contender Kamaru Usman in the main event in Las Vegas. While he came up short over five rounds against Colby Covington back in June, Dos Anjos remains one of the toughest outs in the entire division thanks to a diverse striking attack and a world-class submission arsenal at his disposal. Dos Anjos showed off his best work against former champion Robbie Lawler last December and he'll try to showcase that same kind of skill in his latest headlining effort. Meanwhile, Usman has won his last 12 fights, including eight straight in the UFC. In his last performance, Usman dominated former title challenger Demian Maia over five rounds and he'll look to secure his spot in a future title fight if he can put on an impressive showing against Dos Anjos on Friday night.

JUAN ESPINO VS. JUSTIN FRAZIER
In the heavyweight final of The Ultimate Fighter: Heavy Hitters, Spanish wrestler Juan Espino will take on Justin Frazier, who was a dark horse pick all season long after he was the last pick of coach Kelvin Gastelum on the reality show. Espino is best known for his grappling game, which he relies on quite often, but don't discount his knockout power as he showcased in his fight to get to the finale against Maurice Greene. As for Frazier, the Arkansas native seemed like the unlikeliest finalist when this season of The Ultimate Fighter started, but through hard work he managed to take out two of the top prospects on the show in Anderson da Silva and former Olympic wrestler Michel Batista. Now Frazier looks to continue his upset run while taking on Espino with a UFC contract on the line.

PANNIE KIANZAD VS. MACY CHIASSON
Invicta FC veteran Pannie Kianzad looks to build on her impressive run on The Ultimate Fighter when she faces Macy Chiasson in this featherweight finale. Kianzad has a wealth of experience against top talent, including past fights against current UFC fighters Jessica-Rose Clark and Tonya Evinger. She also showed a ton of grit and determination in her two fights on the show to make it to the finals. As for Chiasson, she only had two professional fights on her record leading up to the show, but she's a serious prospect in the women’s featherweight division. Chiasson has a well-rounded skill set with a ton of experience on the amateur level and she'll look to showcase everything she's learned when taking on Kianzad with the winner joining the UFC roster.

The Ultimate Fighter Finale goes down this Friday live from Las Vegas and on FS1.

PEDRO MUNHOZ VS. BRYAN CARAWAY
Ground specialist Pedro Munhoz will look to continue his climb up the bantamweight rankings when he takes on the always-tough Bryan Caraway. Munhoz has gone 5-1 over his past six fights, with his only loss coming from a razor-close split decision to John Dodson. He bounced back with a win over Brett Johns in August and he'll look to make it two in a row on Friday. Caraway also lost a heartbreaking split decision in his last outing against Cody Stamman, which stopped his two-fight win streak in the bantamweight division. Caraway is criminally underrated at 135 pounds but he'll once again look to pull off the upset in a fight against a legit top 10 threat in Munhoz.

DARREN STEWART VS. EDMEN SHAHBAZYAN
Darren Stewart got off to a rough start in his UFC career with three straight losses and a no contest, but he has really turned things around lately with back-to-back knockout wins in his most recent performances. To make it three in a row, Stewart will have to go through Dana White’s Tuesday Night Contender Series veteran Edmen Shahbazyan, who comes into the fight with an undefeated record with knockouts in every one of his fights. Shahbazyan also happens to be managed by UFC Hall of Famer Ronda Rousey, who will undoubtedly be rooting him on this weekend.

ANTONINA SHEVCHENKO VS. JI YEON KIM
Antonina Shevchenko will join women's flyweight title challenger Valentina Shevcheko as the first sisters to ever compete in the UFC when she makes her debut this weekend. Shevchenko, much like her younger sister, is a Muay Thai stylist with a nasty array of striking techniques that she showcased with a TKO win on Dana White's Tuesday Night Contender Series to earn her contract. Shevchenko will get no easy test in her debut, however, as she takes on Ji Yeon Kim, who is coming off back-to-back wins in the women's flyweight division.

RICK GLENN VS. KEVIN AGUILAR
A potential Fight of the Night candidate could be this featherweight showdown between Rick Glenn and UFC newcomer Kevin Aguilar. Glenn has proven to be a valuable addition to the 145-pound division, as he’s scored impressive wins over Gavin Tucker and Dennis Bermudez. As for Aguilar, he's a former LFA champion with a slew of exciting fights on his resume, including knockout wins against former UFC fighter Damon Jackson and Ultimate Fighter veteran Thanh Le. Aguilar loves nothing more than putting on a show, so expect fireworks when he clashes with Glenn.

JOSEPH BENAVIDEZ VS. ALEX PEREZ
Joseph Benavidez will once again look to flex his muscles at flyweight when he takes on fast rising star Alex Perez, who has looked unstoppable since joining the UFC roster. Perez has racked up three straight wins in the Octagon including a submission victory and a knockout in his most recent fight. Now Perez will take a decided step up in competition to face Benavidez, who has consistently been ranked as a top three flyweight since the division started six years ago.

ROOSEVELT ROBERTS VS. DARRELL HORCHER
Following a dynamic performance on Dana White's Tuesday Night Contender Series to earn his UFC contract, undefeated prospect Roosevelt Roberts makes his first appearance inside the Octagon when he takes on Darrell Horcher at lightweight. Roberts has never gone past the second round in any of his fights, with a string of explosive finishes on his resume. Horcher will definitely be his toughest test to date as he looks to bounce back following a loss in his last fight in this past December.

TIM MEANS VS. RICKY RAINEY
Hard-hitting welterweight Tim Means has suffered through two straight split decision losses and he'll definitely look to rectify that with a strong performance this weekend. Means is known for his aggressive style, where he is constantly stalking his opponents around the Octagon looking for the finish. He takes on Ricky Rainey, who came up short in his UFC debut back in April. Rainey is a veteran with a wealth of experience and he'll definitely bring the fight to Means on Friday.

RAONI BARCELOS VS. CHRIS GUTIERREZ
Brazilian Raoni Barcelos made quite a first impression with his debut fight in the UFC back in July as he earned a vicious knockout over veteran featherweight Kurt Holobaugh. To make it two in a row this weekend, Barcelos will move down to bantamweight to take on Chris Gutierrez, who comes into the UFC on a three-fight win streak and with a 12-2-1 record. Gutierrez has faced good competition throughout his career with a slew of jaw-dropping knockouts on his resume.