TIM ELLIOTT VS DEMETRIOUS JOHNSON
There’s been a lot of Matt Serra-Georges St-Pierre talk being tossed around this week, but if Tim Elliott is to upset Demetrious Johnson, it’s not going to be a one punch blast that does it. Instead, Elliott’s key to victory is being Tim Elliott – unpredictable, awkward, willing to take chances few fighters would. If he can throw a wrench in the works before Johnson gets into a rhythm, anything can happen. But if DJ is DJ, the crown will remain on the head of “Mighty Mouse.”

HENRY CEJUDO VS JOSEPH BENAVIDEZ
Forget the fact that Cejudo and Benavidez don’t like each other. Strictly from a technical and divisional impact point of view, this is a fun fight between two of the best in the flyweight class and an important one for Benavidez, who should be next in line for the winner of Saturday’s main event.
MORE FROM TUF FINALE: Elliott talks about the opportunity | Johnson - Another puzzle to solve | Benavidez - Nothing about Cejudo worries me

JORGE MASVIDAL VS JAKE ELLENBERGER
Normally when two veterans get together, it’s a war of nerves to see who will make the first mistake. I don’t think that will be the case with Masvidal and Ellenberger, as Ellenberger will look to send his opponent’s head into the third row while Masvidal tries to show that he’s got a steel chin and some heavy hands in his own right.

JARED CANNONIER VS ION CUTELABA
Jared Cannonier performed a mic drop on the heavyweight division when he knocked out Cyril Asker in less than three minutes, and it makes his UFC light heavyweight debut worth watching when he faces one of the most aggressive offensive machines in the division in Ion Cutelaba.

ALEXIS DAVIS VS SARA MCMANN
Considering that Alexis Davis was one-half of the greatest WMMA fight of all-time (her 2012 rematch with Sarah Kaufman), I will always tune in to watch her fight, and even more so this time because she’s in with Olympic Silver medalist Sara McMann in what should be a great showcase for the women’s bantamweight division. 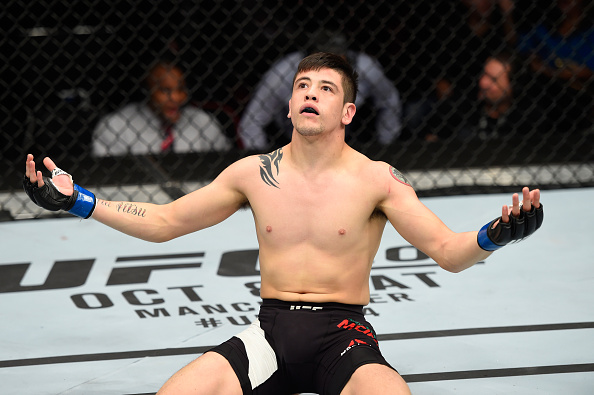 RYAN BENOIT VS BRANDON MORENO
The happiest man in MMA, Brandon Moreno, returns to the Octagon for the first time since his short notice submission win over Louis Smolka, and he’s drawn another tough assignment in Texas’ Ryan Benoit, whose most notable win to date saw him stop another top flyweight prospect, Sergio Pettis.
MORENO SEIZING OPPPORTUNITY AT TUF FINALE

RYAN HALL VS GRAY MAYNARD
I think anyone who has followed the career of Gray Maynard was happy to see him finally break his losing streak and get a new start at 145 pounds. Things don’t get easier for him though, as TUF 22 winner Ryan Hall has the kind of ground game that makes a fighter rethink whether he wants to ever go to the ground again.

ROB FONT VS MATT SCHNELL
Rob Font vs. Alejandro Perez was a nice fight on paper. Rob Font vs. Matt Schnell may be even better. Schnell has been on the radar of UFC fans ever since his appearance on the MTV show “Caged,” and now that he’s finally here, there are high hopes for him, but Font is a one-punch knockout artist with a granite chin and an evolving ground game. In short, this should be a good one.

JAMIE MOYLE VS KAILIN CURRAN
As Damon Martin pointed out in his Fantasy Cheat Sheet, Kailin Curran has shown flashes of brilliance thus far in the UFC, only to have some mistakes cost her. She has to get things right against newcomer Jamie Moyle if she wants to get some momentum heading into 2017.

DEVIN CLARK VS JOSH STANSBURY
You don’t normally describe fights like these as crossroads matchups, but that may be the case for two 2016 UFC rookies Devin Clark and Josh Stansbury. Stansbury cemented a roster spot with a win at the TUF 23 finale, while Clark didn’t get the victory in his debut, which came after he was discovered on Dana White’s “Lookin’ for a Fight” show. So Stansbury wants to keep moving forward while Clark wants to prove that he belongs. Sounds like a pretty good crossroads to me.

ANTHONY SMITH VS ELVIS MUTAPCIC
This fight may be the sleeper pick for Fight of the Night, because not only do Smith and Mutapcic always show up ready to fight, but they’re two Midwest standouts who were scheduled to face each other in the Victory FC promotion before Mutapcic got his call to the big show. Back then, Mutapcic wanted to avenge his buddy Josh Neer’s loss to Smith, and while it’s a few months later, expect that same fire to be on display from both fighters.

BRENDAN O’REILLY VS DONG HYUN KIM
It can’t be easy being a fighter in the UFC with the same name as one of the welterweight division’s most notable contenders, but if “Maestro” Dong Hyun Kim delivers against Brendan O’Reilly tomorrow night and keeps putting on Fight of the Night wars like he did against Marco Polo Reyes in June, we may eventually start asking who this “Stun Gun” Kim guy is.