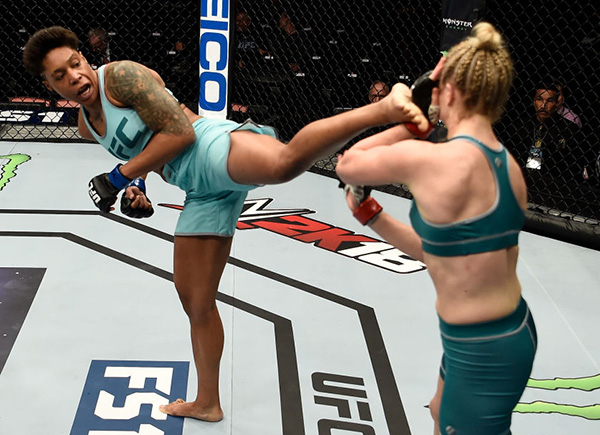 Shana Dobson kicks Ariel Beck in their women's flyweight bout during the TUF Finale event inside Park Theater on December 01, 2017 in Las Vegas, Nevada. (Photo by Jeff Bottari/Zuffa LLC/Zuffa LLC via Getty Images)" align="center" />
With just three pro fights leading up to her Octagon debut against Ariel Beck last December, Shana Dobson was a prime candidate for the first-time UFC jitters. But they weren’t even in the building when “Danger” made the walk and then put on a stellar performance in stopping Beck in the second round, a calm that she attributes to her stay on The Ultimate Fighter 26.

“Going into the fight, a big thing that really did get rid of the jitters was being on TUF and having that exposure,” Dobson said. “We fought 20 feet from (UFC President) Dana White. We fought in front of a very important crowd and in front of millions of viewers. That, and just being confident and comfortable in my camp and knowing that when I go in there and fight Ariel, that technically being my UFC debut, it was just a matter of going in there and using everything that we’ve trained in camp, and whatever happens happens.”

As soon as she entered the Park Theatre in Las Vegas, her first stop was the Octagon, and just like that, she was in her comfort zone. It was time to fight.

“When I walked into the venue and got to go in the cage, that was a big thing for me,” she said. “Go in the cage, move around, look into the seats and just get comfortable and start feeling at home there. I think that really did help me out.”

Looking like a seasoned vet, Dobson was seemingly a completely different fighter than she was before TUF, and even during the all-flyweight season.

“I was just reacting and really just grooving,” she said. “But I’m very critical of myself, so when I did look back at the fight, I had those moments like, ‘Damn, look at me,’ (Laughs) and those moments where I’m looking for improvements in the next camp. I don’t want to sit with my win, I don’t want to get comfortable. I always want to see how I can improve and evolve.”

On April 14, Dobson will seek her second UFC victory when she takes on Dana White’s Tuesday Night Contender Series alum Lauren Mueller in Glendale, Arizona. It’s an intriguing matchup of 125-pound prospects, and odds are good that the 28-year-old Dobson will show a different look than she did against Beck, considering that she is now back east, living in Washington, D.C. and training with Team Lloyd Irvin in Maryland.

“I’ve been thinking about it for a while. I’m the oldest of three children, so my little sister just had a baby and I wanted to make sure that I was there to help out and be present in my nephew’s life,” she said. “And my girlfriend is going to Howard University, so it just seemed right.”

Moving back to the DMV from Texas was an adjustment for Dobson at first, but she clicked immediately with her new coaches and teammates, a transition made easier by an introduction by lightweight contender James Vick.

“I had been training with James Vick at Phalanx MMA and Genesis in Fort Worth, and I know he trains out of Lloyd Irvin. So I hit him up and asked him to make the introduction, and everything went smooth. Lloyd welcomed me with open arms and we got started right away, even before I had a fight scheduled.”

Dobson admits that the training is pushing her hard, but she’s confident that the end result is going to be a new and improved fighter next month.

“I think we’re going to see an evolved form of me,” she said. “Master Lloyd looked at what was working and what we could adjust, and what we did was take what’s working, amplify that, and take what we needed to adjust and hit it hard. There was a big gap I needed to close with my ground work, so we’ve been hitting that hard. And I was nervous because I didn’t want to neglect my striking because that’s my baby. (Laughs) But we have done nothing of the sort. He’s a perfectionist and it’s definitely helping me out.”

It’s good news, not just for Dobson, but for a growing fanbase that embraced her after her time on TUF. That’s not always the case for alumni of the reality series, some of whom take a long time to get the fans on their side. But when it comes to the affable Dobson, it was clear from her first appearance on the show that she was someone that was easy to root for.

“When I was preparing to go out to TUF, I was really nervous,” she said. “The biggest part was competing for the belt, but damn, I’m gonna be on TV. I’m just a chill, humble person, so I was like, ‘What will make me interesting to where people would want to hear my life story?’ And the people around told me to just be myself. And that’s what I did. And when we went out for the TUF Finale, there were fans there and fans reached out to me online, and it’s still surreal that they’re interested in me. I’m just lil’ ol’ me (Laughs), but the love is overwhelming and it’s super dope. I want to get to know those people too.”

They get another chance to know her in a few weeks, and if the Beck fight was any indication, this is going to be a long relationship.

“We (Dobson and her girlfriend Ari) were looking at some of my older videos, like my amateur fights and when I first turned pro and I’m seeing the total difference between then and how I’m looking now,” Dobson said. “It’s crazy. I’m excited to see what it’s gonna look like a year from now, five years from now, to see what I look like as a champion with the strap around my waist.”