PLUS THE INAUGURAL THE ULTIMATE FIGHTER® CHINA WINNERS WILL BE CROWNED 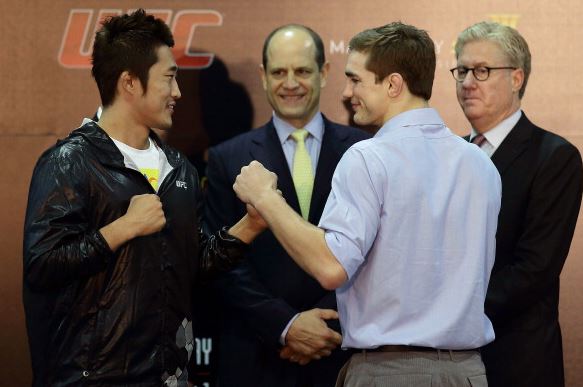 The Ultimate Fighting Championship® makes a triumphant return to Greater China with UFC FIGHT NIGHT MACAO, starting at 6 pm on Saturday, March 1, 2014, headlined by an intriguing welterweight bout pitting South Korean MMA pioneer Dong Hyun Kim against England’s John Hathaway at the Cotai Arena, a 15,000-seat venue at The Venetian® Macao-Resort-Hotel in Macao. The exciting MMA event is the latest UFC spectacular to come to Greater China as a result of a multi-year partnership with Sands China Ltd and Marina Bay Sands..

Kim (17-1-1) comes into this fight fresh from a win over Erick Silva on October 9, 2013 at UFC Fight Night 29 via a stunning one-punch  knockout that earned his first Knockout of the Night bonus award. Hathaway, 26, who has notable victories over the likes of Rick Story, Paul Taylor and Diego Sanchez, holds a 17-1 record and is on a three-win streak.

“The first ever UFC event in China held at the Cotai Arena in 2012 set several on-property records and I have no doubt that fans from Greater China will be looking forward to this one,” said UFC Asia Managing Director Mark Fischer. “Besides the exciting East-West clash between Kim and Hathaway in the main event, we will also see the crowning of the winners of the inaugural season of The Ultimate Fighter China! This historic occasion could see the emergence of a new generation of Chinese MMA stars and kicks off a new chapter in the sport of mixed martial arts.”

In addition to the Kim-Hathaway main event, the first The Ultimate Fighter® winners in Asia will be crowned when the Octagon® makes its way back to the Cotai Arena.

History has already been made as the world’s most prominent MMA reality series, The Ultimate Fighter, was shot in Shenyang, Liaoning this year and is currently being shown on Liaoning Satellite TV, the No. 1 satellite TV network in northeast China, reaching more than 830 million viewers nationwide.

Over 150 initial applicants hailing from Greater China, United States, Canada, and Southeast Asia attended try-outs and interviews held in Beijing, at Cotai Strip Resorts Macao, and the Marina Bays Sands in Singapore earlier this year for a chance to appear on the first Asian edition of The Ultimate Fighter.

Four finalists – two Lightweights and two Welterweights – will be unveiled in the final episode of the inaugural The Ultimate Fighter China shown on 26 January and they will vie for the opportunity to claim a lucrative six-figure contract with the Ultimate Fighting Championship on 1 March at the Cotai Arena.

“Sands China is very excited about the return of UFC to Macao, and we’re happy to see new talent being discovered in China,” said Edward Tracy, President and Chief Executive Officer of Sands China Ltd. “UFC FIGHT NIGHT MACAO and The Ultimate Fighter China represent our company’s continued commitment to bringing the world’s best sports entertainment to Macao, increasing global awareness of our great city, and helping cement its place as a world centre of tourism and leisure.”

Added President and Chief Executive Officer of Marina Bay Sands, Mr. George Tanasijevich,
“Marina Bay Sands is constantly on the lookout for unique international sporting events for our guests to enjoy . As the first venue in Southeast Asia to host UFC Fight Night, we are pleased to work with UFC to continue to  enhance sporting offerings in Singapore. The sponsorship of UFC Fight Night Singapore and The Ultimate Fighter China is part of our multi-tiered approach towards delivering the best program of sporting and entertainment events available in Asia.”

Catch all new episodes of The Ultimate Fighter China on Liaoning Satellite TV on Saturday and Sundays in the month of January at 10 pm.

For more details on the UFC and The Ultimate Fighter China visit sports.sohu.com/tuf. All bouts live and subject to change.