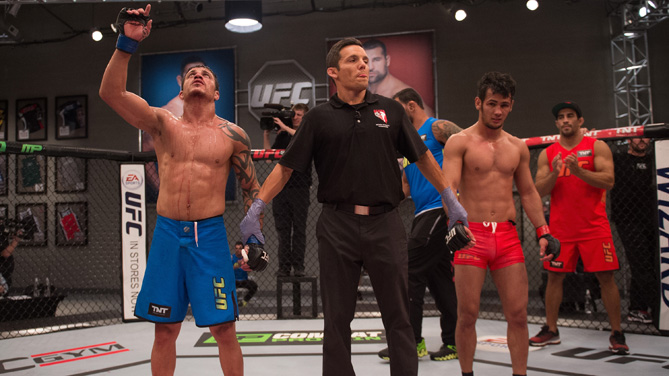 When The Ultimate Fighter Brazil 4 kicked off 12 weeks ago, the competition was divided equally between two coaches and 16 fighters, but it didn't take more than a few fights for the sides to splinter dramatically in terms of wins and losses.

What started out as Team Anderson Silva quickly dealt with turmoil after the former middleweight champion had to excuse himself from the show following a positive drug test came back for his most recent fight in January, so Antonio Rodrigo Nogueira had to come in at the last minute to take over and coach a group of fighters he had no part in selecting.

Things didn't go well for Team Nogueira in the beginning.  Actually, that's a vast understatement, because the floor collapsed and the ceiling caved in on them as Team Shogun ran roughshod over them for the first six weeks of the competition and it took an injury to Giovanni “Soldado” Santos for two Team Nogueira fighters to face each other and finally advance someone to the next round.

The team competitions didn't go any better, as Team Shogun won every contest and every prize all season long, so it's safe to say things have been rough on Team Nogueira.

But with only two fights to go to determine the finalists for the lightweight and bantamweight divisions, Team Nogueira showed up when it mattered most, as both Fernando Bruno and Reginaldo Vieira pulled off victories to make it to the finals, where they will square off with two fighters from Team Shogun to declare The Ultimate Fighter Brazil 4 champions for this season. 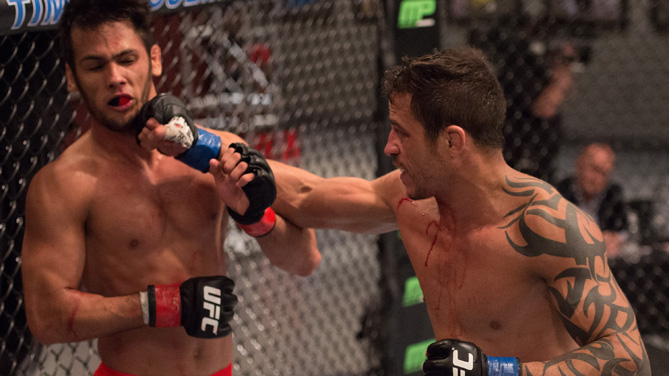 The first fight on the final episode took place in the bantamweight division, as Vieira took on Team Shogun young gun Bruno “Korea” Mesquita. Prior to the fight starting, Mesquita acknowledged just how tough this matchup was going to be for both fighters and he knew it would come down to which one of them ultimately wanted it more.

"Once the cage doors are closed it'll be just me and him," Mesquita said. "There's no favorite. Whoever wants it most will win."

Mesquita came out firing as he looked for his signature spinning kicks time and time again, but Vieira and his coaches studied his movements well and were prepared for the flashy strikes he would try to land early in the fight. Vieira stayed patient until he was able to get inside on Mesquita and toss him to the ground with a huge slam. Vieira eventually transitioned to a guillotine choke and as Mesquita wiggled and rolled trying to break free, it appeared the fight might come to an early end.

To his credit, Mesquita fought his way free, but again found himself stuck in Vieira's grip later in the round. Leaving his head and neck exposed to the choke would eventually be his undoing, although Mesquita came out strong in round two as he put Vieira down on his back and began to work a ground and pound attack from the top.
Vieira stayed patient, and when Mesquita fell asleep with his defense for just a split second, he pounced. Vieira locked on another vice-like guillotine choke and there was no escaping for Mesquita this time, as he was forced to tap out.
"The fight was very tough, it was really intense," Vieira said. "Korea likes to counterstrike because that's his style. He surprised me when he came at me."

Vieira moves on to the finals to represent Team Nogueira while Mesquita learns a valuable lesson to use before his UFC career kicks off in the near future. 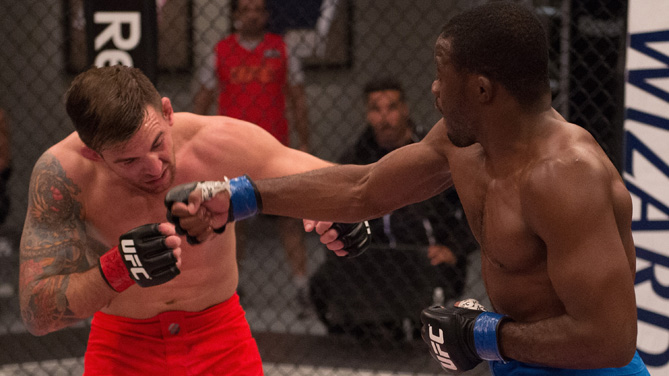 The second fight was not only for a slot in the lightweight finals, but there was also a slight rivalry between Fernando Bruno, who hails from Brazil. and his opponent Nazareno Malegarie, who comes from Argentina. Bruno commented before the fight that there's a long standing grudge between athletes from these two countries and he knew this was sure to fuel a little bit of pride on top of the big prize that already rested on coming away victorious.

"Nazareno will defend the Argentinian flag," Bruno said. "But I'll trample him with the Brazilian flag."

As it turns out, Brazil ruled the rivalry on The Ultimate Fighter, at least as far as Bruno being able to secure a win over Malegarie with a sound game plan and well-rounded attack over all three rounds.

Bruno started the action with a good takedown, and he began to rain down punches on Malegarie throughout the first round. Malegarie battled back and actually reversed position later in the round and then eventually took Bruno down again, but he struggled to hold the Brazilian on the mat and usually ended up on his back instead.

The second round was close, with both fighters exchanging blows without a ton of action, but the third round saw Bruno take over with a dominant striking attack, as he cracked Malegarie numerous times throughout the five-minute frame, snapping his head back with each punch landed. Bruno's ability to come alive and really pour on the offense in the final five minutes allowed him to secure another round and the fight. 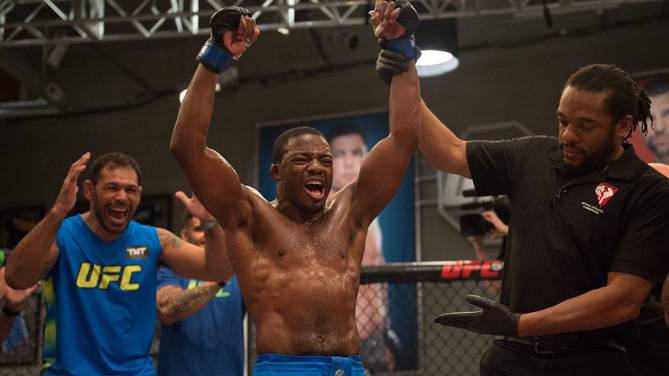 When it was over, the judges all scored it 30-27 in favor of Bruno, who now moves on to The Ultimate Fighter Brazil 4 finals in the lightweight division.

The season officially comes to an end as the fighters all said goodbye, but they will meet again in the finals on August 1 in Brazil as part of UFC 190: Rousey vs. Correia.

In the bantamweight final, Reginaldo Vieira will represent Team Nogueira as he looks to complete his comeback story against Team Shogun fighter Dileno Lopes.  Over in the lightweight division, arguably Team Shogun's most dominant fighter, Glaico Franca, will face off with Fernando Bruno to crown the 155-pound champion.

Who comes out on top? Who will walk away as The Ultimate Fighter Brazil 4 champions? Tune into UFC 190: Rousey vs. Correia to find out.
> Missed the episode? Watch it now on UFC FIGHT PASS