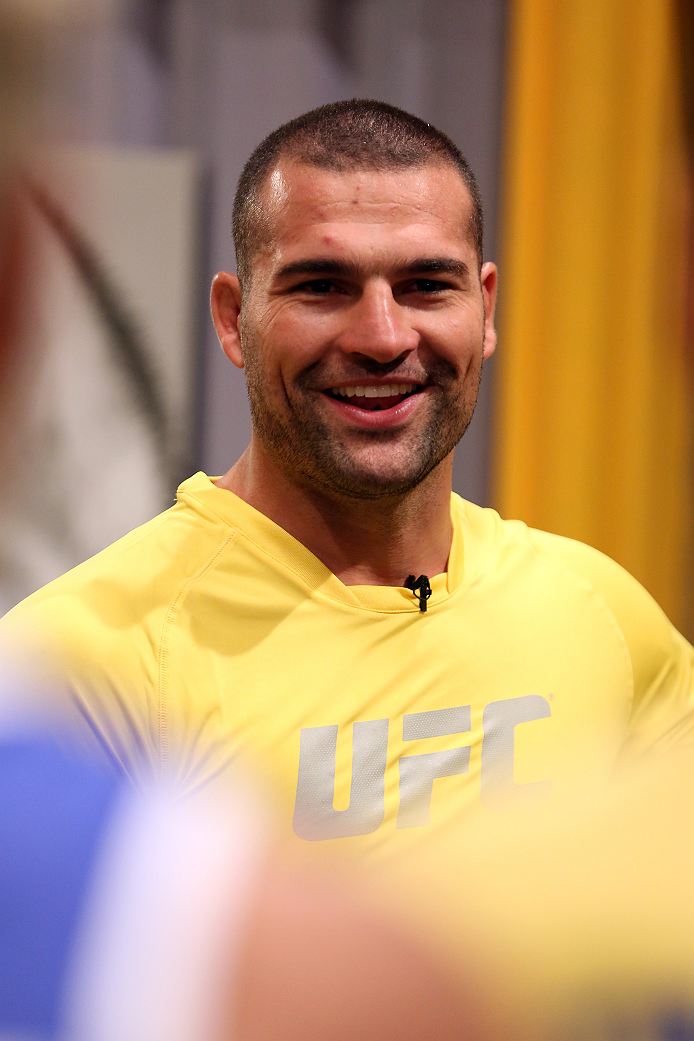 When it was announced that Mauricio “Shogun” Rua was going to coach season four of The Ultimate Fighter Brazil, the immediate response from many centered on Rua’s upbringing in the sport at the legendary Chute Boxe Academy in Curitiba.

Would the 33-year-old be the mature, soft-spoken ambassador for the sport that newer fans have come to know, or would he impart the teachings he picked up in a gym where the intense sparring sessions with some of Brazil’s best have taken on mythical proportions?

Well, a little bit of both.

“Training the fighters on TUF is a different challenge in itself, due to the nature of the competition, as you have little time to train the kids, and they have to make weight and fight so often in a short amount of time,” Rua said through manager / translator Eduardo Alonso. “So you have to be smart with the training, not try to change too much of their own style, and just find ways to help them while working the mental aspect of a team, which I think is so important. So I think in that sense, we did what was most important from the Chute Boxe spirit, which is of being a team, being united and helping out each other, and being confident and never giving up, and always going in there to give your best. That's what we tried to implement, and I hope we succeeded.”

Taking a solid team of coaches to Las Vegas for the taping of the show, which premieres on UFC FIGHT PASS this Monday, Rua made sure to cover all bases with a mix of old friends from Chute Boxe and a new assortment of specialists.

“I had some great help from my coaches, even with other former Chute Boxe friends as Michael Costa, who is my Muay Thai coach, and my brother Murilo “Ninja” helped during part of the show as well,” he said. “Not to mention Demian Maia, with all his UFC and grappling experience, Wagner Mota, Dave Esposito and Kody Hamrah with grappling / wrestling, Ivan "Pitu" with boxing and Eduardo Alonso as my assistant head coach. We certainly gave our best and I hope it translates into a good job for the kids.”

Originally scheduled to coach against fellow Brazilian icon Anderson Silva, Rua instead saw things get switched up when Silva was forced to leave the show, prompting the arrival of one of the sport’s greats in Antonio Rodrigo “Minotauro” Nogueira. And while the two are fierce competitors, there is no Penn-Pulver, Ortiz-Shamrock or Rousey-Tate bad blood brewing.

They’ll leave the competition for the Octagon.

“I really respect Minotauro,” Rua said. “He is a legend and he always respected me, so we always got along well. I think the great thing about us is that we both wanted to show what MMA is really about, and how we were raised in martial arts. So it wasn't just the usual clowning nonsense that you see sometimes in those shows. Instead, we focused on building teams with fighters united, helping each other, training hard and sharing their dreams and helping the teams to move forward.

“As an MMA fighter, life is not a party,” he continues. “It's a life of sacrifice and a lot of heart involved. I think that translated into the kids and the show, as we both took this with a lot of respect. Also, like I said, we are very competitive and didn't want to lose in anything. Besides the fights, the show has a lot of small challenge contests for the teams and nobody wanted to lose anything, so that created a heated environment of competition between the teams and emotions were high on many occasions. I can't wait to watch it.”

With Brazil one of the hotbeds of mixed martial arts, a sport perhaps only second to soccer in terms of popularity, it’s important for the veterans and leaders to set an example for the next generation that will be filling up the UFC roster in the years to come. And as far as ambassadors are concerned, you won’t find two better than Shogun and Minotauro.

“This was one of my biggest goals as a fighter, to be a coach on TUF, as I know how much this means here in Brazil,” Rua said. “I always wanted to have this chance to show MMA the way it should be, and also to make an impact on those kids. This is the opportunity of their lives, and we have to treat it very seriously, and dedicate ourselves the most to be able to allow them to do their best with this chance. The kids were great, there are some very talented fighters, and we were able to truly be a team there, which meant a lot to me. I wanted to leave them some foundation to build from as fighters, to learn things, especially about team, and we hope to have been able to do that.”

Could Rua, a former UFC light heavyweight and PRIDE Grand Prix champion, have ever pictured something like this being part of his resume when he began fighting in 2002?

“Not at all,” he said. “When I started fighting, if you told your girlfriend's father that you were a fighter, his face would change right away (Laughs), and he would most likely advise his daughter not to date you anymore. (Laughs). Nowadays, it changed so much. TUF Brazil goes on Globo TV here, which is the biggest channel in the country, and we couldn't even dream of having MMA on Globo back then. But it goes to show how much the sport has changed and how big the UFC has got, and this is great. I feel privileged to have had the chance to be at a top level in this game for so long that I could be part of its growth, and to coach these kids in TUF Brazil now is just a great experience.”

Rua’s coaching career on TUF may have gotten off to a pleasing start for him, but now that taping is over, he’s got a fighting career to resume, and on August 1 in Rio de Janeiro, he will do just that against his coaching rival’s brother Rogerio. The UFC 190 bout is a rematch of one of PRIDE’s greatest bouts, a 2005 war won by Shogun via decision, and fans have been clamoring for it ever since the two signed on with the UFC. This summer, the fans – and the fighters – get their wish.

“Curiously, I just watched the fight with Rogerio himself yesterday while recording a show for Sportv Channel in Brazil,” Rua said earlier this week “We were watching the fight and analyzing it, and it was a fun experience. The first thing I told Rogerio was how much younger we were, and how much more hair he had back then (Laughs). We get along well and respect each other. It was a great fight, and I'm proud that people still remember it and regard it as one of the best fights ever. I think people have wanted to see this rematch for a long time, and once we were supposed to fight in Canada, but Rogerio got injured. I think it's best that this fight happens in Brazil now. It makes a lot of sense and I'm sure it's going to be a great show. He is a great, well-rounded fighter, and I know I have to be well-prepared. Plus, I think that even though the fight is at UFC 190, I think we will carry on some of that TUF Brazil team rivalry to the cage with us once we fight - in a good way of course (Laughs).”

Four months may seem like an eternity to wait for Rua-Nogueira II, but in the meantime, Shogun is confident that fans will find plenty to enjoy when he coaches against Rogerio’s brother Minotauro.

“They (the fans) can expect the best TUF Brazil season so far,” Rua said. “They can expect some very talented fighters, great fights and a lot of intensity. There was a lot of emotion and tension involved in the rivalry between both teams during the show, and although there was a ton of respect between the coaches, we were all competitors and wanted to win everything - from the coin flips to the challenge contests, and, of course, the fights. So that translated into intensity and the fighters got emotionally invested in this and that led to fierce competition. I can't wait to see it on TV. Also, most importantly, 135 and 155 are two weight classes with great talent and there was no bad fighter on the roster, so usually the fights were exciting from start to finish, and it was a special environment for those kids to be in Las Vegas for the first time and be next to UFC headquarters. There was a lot at stake and it showed. It's a great season and I think people are going to love it.