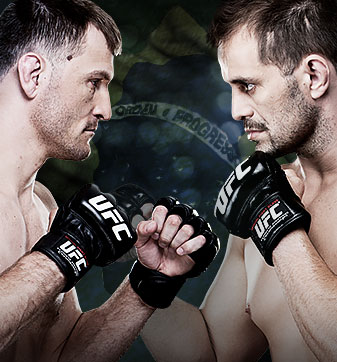 The UFC's latest trip to Brazil will crown the next two winners for The Ultimate Fighter, while top-10 ranked heavyweight Stipe Miocic faces home country favorite Fabio Maldonado in a slugger's dream match.

The card also features the return of Demian Maia, who looks to bounce back from two straight losses as he takes on Russian newcomer Alexander Yakovlev.

The two bouts in the Ultimate Fighter Brazil finals should also be ultra-intriguing, as Team Sonnen goes to war for the middleweight crown with Warlley Alves taking on Marcio “Lyoto” Alexandre Junior while the heavyweights will pit Team Wanderlei's lone surviving member Antonio “Cara de Sapato” Carlos Junior against Vitor Miranda, who is also best known by his nickname “Lex Luthor.”

In today's fantasy preview, we'll break down some of the key fights on the main card as we get geared up for UFC Fight Night and The Ultimate Fighter Brazil 3 finals.

Ohio native Stipe Miocic travels to Brazil for the first time, although he was originally scheduled to meet former heavyweight champion Junior Dos Santos with a chance to catapult to the top of the rankings.  Unfortunately, a broken hand sidelined the Brazilian, and light heavyweight competitor and former boxer Fabio Maldonado jumped at the chance to step into the main event, although once it's all said and done, he may regret that decision.

Miocic is a power puncher with the exclamation on power, but he not only lands big shots, he lands at volume as well.  Miocic averages 5.18 significant strikes per minute, which is a great rate for a heavyweight, while defending 64 percent of his opponent's offense.  While he's primarily been known as a striker in his UFC career, Miocic is also a former college wrestler who also averages just over two takedowns per 15 minutes in the Octagon.

Maldonado's approach is never a huge surprise - he loves to go out and use his boxing to batter an opponent into submission.  Throughout his UFC career, Maldonado has been like a zombie with his ability to absorb punishment and then fire back with shots of his own.  His body shots might just be the best in the sport as well, because when Maldonado digs into an opponent's ribs, it feels like a thousand-pound weight sitting on their chest as they try to take a breath.  Maldonado is extremely active, landing 6.2 significant strikes per minute with just over 60 percent accuracy, and those are all good things.

The downside in this fight ultimately comes to a massive size and power difference that Miocic will possess.  He does a great job of keeping opponents at a distance with his jab, and he'll also have a three-inch reach advantage over Maldonado.  That's not even mentioning the fact that Miocic will likely have about 40 pounds on Maldonado on fight night. Look for Miocic to punish Maldonado with punches and maybe even grab a takedown to unload some ground and pound on the Brazilian before likely finishing this fight inside the first two rounds.  Maldonado is game and a tough as nails fighter, but the odds are just too long on this one to see him pulling out a massive upset victory.

Cara de Sapato may not have much MMA experience with only three pre-TUF fights, but he grew up on the Brazilian Jiu-Jitsu circuit, winning several grappling titles, including a Pan-Am championship in 2012.  Cara De Sapato was just as dominant on the reality show, putting away two opponents by TKO and another by submission.  The ground is going to be his best friend in this fight because chances are he doesn't want to stand and trade with Miranda because the odds certainly won't be in his favor.

Miranda is a very experienced kickboxer who cut his teeth competing in K-1 and stayed active in the sport up until last year, when he made his way onto The Ultimate Fighter and focused solely on MMA.  On the show, Miranda was dominant with his striking, showcasing his skills all the way up to the semifinals when he battered Richardson “Rick Monstro” Moreira with punches on the ground to get a stoppage win and move on to the finals.

While MMA has evolved way past the days where any fighter is just a grappler or just a striker, this matchup is a bit of a throwback considering the strength of each man in this bout.  Cara de Sapato undoubtedly wants this fight on the ground, where he will have a strength and technique advantage.  Miranda isn't bad on the mat, but his real skill comes on the feet, where he puts together solid combinations with both his punches and kicks.

If the advantage goes slightly to one side, it falls to Vitor Miranda just based on his overall experience level inside the MMA circle.  He's had four times as many bouts as Cara de Sapato, while facing some stiff competition along the way.  If his training after the show ended continued to evolve while knowing he was about to face a grappler like Cara de Sapato, then he should be able to stuff the takedown and counter with strikes.  Chances are he'll go to decision, however, just because taking too many risks with kicks could land Miranda on his back so he'll play it safe and just outpoint Cara de Sapato for three straight rounds.

In the middleweight division of the TUF Brazil 3 finale it's an all-Team Sonnen affair as Warlley Alves meets Marcio “Lyoto” Alexandre Junior.  Both fighters were extremely impressive during their respective stints on the show although there's no doubt Alves was the highlight reel performer from his first fight to get into the house all the way through the semifinals.

When this season of TUF Brazil is officially wrapped on Saturday night, Alves could be the shining star of the cast.  While he's naturally a welterweight, Alves brings a ferocious combination of striking and submission skills to the cage and a style that might remind some folks of a young Chute Boxe fighter like Wanderlei Silva or Mauricio “Shogun” Rua.  He gets a little wild at moments, but he's got the kind of power to put any opponent to sleep and a slippery jiu-jitsu game that he can unleash on a moment's notice.

Marcio “Lyoto” is a much more controlled striker, which is where he earned his nickname in the first place with a karate-based style similar to former light heavyweight champion Lyoto Machida.  Lyoto had more battles while he was in the house than Alves did, but he ultimately came out on top each time.  Lyoto used good footwork to stay on the outside of his opponents and counters any takedown attempts with a fundamentally sound anti-wrestling game.

Now it's not fair to base what will happen on Saturday night solely on the bouts that took place during the fighters’ time in the house, but there seems to be something special inside Alves that just screams winner.  He was confident from the first day he arrived, and never slowed down in any of his bouts to advance in the tournament.  Considering Alves also trained with Lyoto everyday under the tutelage of Chael Sonnen, he knows his opponent well and that can only further his advantage.  Both men will show great respect to the other's strengths, so this one will likely make it to the judges, but Alves should be the dominant force and a real prospect to watch in the UFC welterweight division over the next few years.

General thinking might lead you to believe that Yakovlev is being served up to Maia following two tough losses to Jake Shields and Rory MacDonald, but that's not necessarily true.  Yakovlev is an accomplished fighter who trains alongside several notable UFC competitors including Adlan Amagov and Khabib Nurmagomedov.  He got to the UFC after a stifling performance over knockout specialist Paul Daley in his last fight so he's no stranger to facing top talent either.

The book on Maia is pretty well written - he's an incredible grappler with better than average hands, and up until his two recent losses, he looked like a real force in the welterweight division.  Even in those defeats, Maia had plenty of close moments but just couldn't put his opponents away.

Don't sleep on Yakovlev as an underdog, but given an unpolished standup game and his tendency to pull the fight to the ground, he should play right into Maia's hands.  The Brazilian is not only a slick submission specialist, but he's got great reversals and a dominant style on the mat that's hard to overcome, even for a well renowned Sambo fighter.  Maia will try to overwhelm Yakovlev in the first round if possible and if the Russian isn't careful, he might just find himself in deep waters before he even gets a chance to swim.

In the long term, Yakovlev is another Russian import that will be fun to watch develop, but this is an incredibly hard test for his first fight out of the gate.