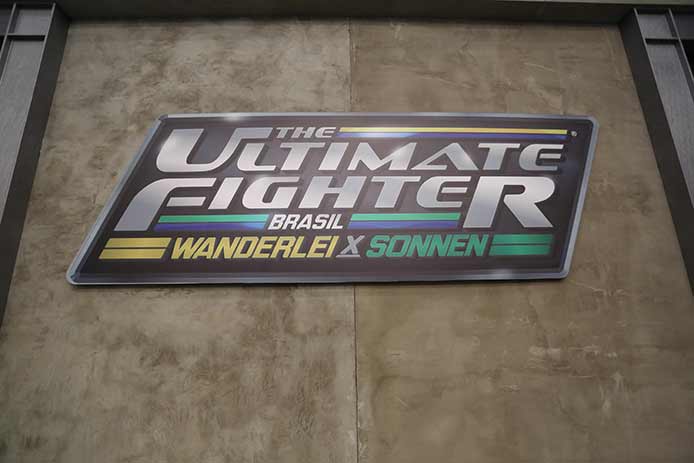 The newest season of The Ultimate Fighter Brazil will debut tonight on UFC Fight Pass (10pm ET / 7pm PT), with one of the nastiest and most personal rivalries in the history of the show taking center stage as coaches Chael Sonnen and Wanderlei Silva lead teams of middleweights and heavyweights toward a potential shot in the UFC.

There is certainly no love lost between Sonnen and Silva.  From the constant pokes and prods from “The American Gangster” about how washed up and irrelevant Silva is in today's MMA world, to the former PRIDE champion's confrontation with Sonnen at a convention in Las Vegas last summer, as well as his heavy metal laced video tirades, these two are not putting on a rivalry for the cameras - they just do not like each other.

The two fighters do stay civil enough to introduce themselves to the fighters before the competition begins.  This season there will be 16 heavyweights and 16 middleweights fighting through an elimination round to see who makes it into The Ultimate Fighter house.  As an added bonus this season, both Silva and Sonnen will be joined by a celebrity coach, who will help with their respective teams throughout the year.

It's clear from the very beginning of the show that Silva will hold a slight tactical advantage speaking Portuguese to the fighters directly as opposed to through a translator, which is what Sonnen will have to do all season long.  There's also no doubt that Silva is an icon in Brazil, as all of the fighters light up when seeing the legendary fighter step up to speak to them as the episode starts and the fighters get ready to step into the Octagon for the first time.

As the fights begin this season, it's probably the most cordial moment you'll experience with Sonnen and Silva both just sitting back and enjoying the fights, as they analyze who they might potentially pick for their teams.

There has been a slew of talented fighters coming out of Brazil over the years, and in many ways the South American country really is the birthplace of the UFC, given the foundation built by the Gracie family all those years ago and the domination put forth by UFC Hall of Famer Royce Gracie in the early days of the Octagon.  One thing that hasn't changed, even though nearly 21 years have passed since Gracie debuted, is that the Brazilian fighters still carry a kind of fire and ferocity that is virtually unmatched in the world of MMA.

The fights to get into the house this season are definitely some of craziest there have been lately during The Ultimate Fighter, with every competitor truly leaving everything they have inside the Octagon.

Some of the fighters you'll meet this season include Goncalo Salgado, who hopes to be the first competitor to ever make it to the UFC from Portugal.  Salgado also had an interesting job before leaving to go do The Ultimate Fighter, as he was part of the security team that guarded soccer star Cristiano Ronaldo and his family.

Douglas Moura, one of the Brazilian middleweights, comes from a fighting family because his wife is Duda Yankovich, a former boxing champion and current mixed martial artist who has competed in promotions like Invicta Fighting Championships and has faced notable names like current UFC fighter Jessica Andrade in the past.  Other fighters on the show discuss the sacrifices they made just to get here, including one Brazilian who gave up his job of 10 years to try and make the cast after his employers refused to give him the time off to try out.

Everton Rocha is another fighter that comes from an interesting background as a member of the Brazilian police force known as 'The Shock Squad', where his job puts him in danger each and every day he walks the streets of Rio de Janeiro.

Wanderlei Silva even has a close friend and student competing on the show, as Ricardo Abreu competes in the middleweight division. Abreu is a multi-time Brazilian Jiu-Jitsu champion as well, who comes from the same lineage that produced Andre Pederneiras.  If that name sounds familiar, it's because Pederneiras is the head coach and trainer for the Nova Uniao team responsible for featherweight champion Jose Aldo and bantamweight champion Renan Barao.

The fights in the opening round will be split into the first two shows, and there are definitely some can't miss bouts during the opening eight bouts.  One of the most vicious knockouts in Ultimate Fighter history takes place, as well as a submission that will even make Dan Hardy grimace when seeing how the human body can be folded, twisted and turned.

There are plenty of personalities to discover this first week, but the best part are the fights without a doubt. With more than a few 'don't blink' moments, The Ultimate Fighter Brazil 3 is off to a great start and this is all before Sonnen and Silva really even have to spend much time together.